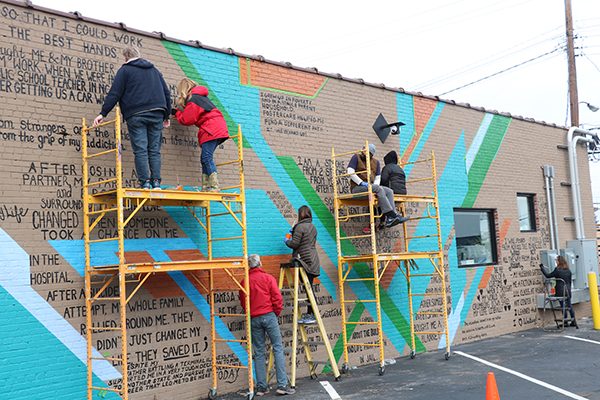 Volunteers paint the side of Perch in Scott’s Addition on Nov. 14. (Charlotte Woods)

A new local web platform is looking to combine the two, in a fusion of philanthropy, technology and municipal government.

The Giving Wall, a website that connects people living at or below the poverty line with those who are willing to help them fill a need, launches Dec. 3.

Founder Becky Crump first conceived of the concept about 1 1/2 years ago. She since has enlisted the city’s Office of Community Wealth Building and a community of do-gooders who regularly attend her Mindful Morning speaker series to help start the online service and facilitate transactions.

Examples of help could include someone starting a new job but unable to afford the necessary new work boots or uniform, or someone unable to pay an auto repair or medical bill after just having paid their rent.

“They’re very singular in their existence,” Crump said. “They’re one-off needs specific to the person or the family. You can’t fulfill them in mass quantity like a food or clothing drive.”

The Giving Wall operates by connecting what it calls “Supporters,” the people who help, with the “Believers,” those who need a helpful favor. 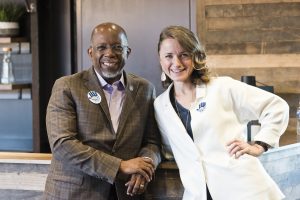 Reggie Gordon (left) and Becky Crump pose at an October information session about the Giving Wall in the 1717 Innovation Center. (Courtesy of Mindful Mornings)

“We were really intentional about the words,” said Reggie Gordon, formerly director of the Office of Community Wealth Building and now deputy chief administrative officer for the city’s Human Services Department, which includes his former office. “At the core of this, we are connecting people who want to support someone who has a belief in us and a belief they can move forward.”

Gordon was involved in the site’s formation.

Supporters visit the web page, browse categories of needs and “purchase” a need that they will fill.

When selecting a service, Supporters can see personal stories of the people (first names only) they’d be helping.

“Stories are a big piece of this. It can’t just be transactional,” Crump said.

For needs involving physical items, The Giving Wall handles the purchase and determines how the Believer will obtain the item — pick it up at the Office of Community Wealth Building, mailed or hand-delivered.

Supporters also can make a one-off monetary donation of any amount to a fund The Giving Wall maintains for more urgent needs and their shipping fees.

Once the transactions are underway, the Enrichmond Foundation, a local nonprofit that connects to other nonprofits in the area, handles the money. Crump said the foundation’s involvement enables Giving Wall supporters’ “purchases” to be tax-deductible.

The Giving Wall derives no revenue from the process, Crump said.

Crump pondered starting The Giving Wall for some time before she connected with Gordon after he spoke at one of her Mindful Mornings events.

He said clients in the Office of Community Wealth Building are connected with case workers as they move towards economic stability.

Gordon said it was all too common for clients to have needs that existing government or nonprofit programming couldn’t meet.

Volunteers have worked with Crump and Gordon for six months to develop the platform, culminating in the holiday-season launch.

“Turkeys and toys are nice,” Gordon said. “At this time of year we are poised to give, but with The Giving Wall, we’re asking people to go deeper. On the site you’ll see exactly what someone needs to move in the right direction.”

In the coming weeks, volunteers will help roll out a social media campaign.

In anticipation of the site’s launch, Crump coordinated with local businesses, a prominent Richmond muralist and volunteers to paint murals that tell crowdsourced stories of people helping each other in need.

Crump reached out to local muralist Hamilton Glass about participating in communal art projects, the idea being that the act of transforming physical walls can connect community members through shared experiences of giving or receiving help.

Crump and Gordon gathered anonymous anecdotes from the people they knew through their connections with Mindful Mornings and the Office of Community Wealth Building.

“The cool thing was if you threw them all in a pile, you wouldn’t know where any story came from,” Crump said. “They were so heart-wrenching; some were uplifting. It was such a touching experience.”

“I was sitting down on my luck by the road in off weather. Someone drove by, saw me and bought me a blanket,” reads one story on the side of Perch.

Another reflects on a grandfather purchasing a used car for a family that owned no vehicles.

“I think that, too, is the power of sharing the stories in all pieces of The Giving Wall and these murals,” Crump said. “When someone is painting someone else’s story, they connect to that person.”

Crump is willing to consider expansion possibilities. Her speaker series, Mindful Mornings, is in 15 U.S. cities, and depending on how much the site helps in the Richmond community, it’s possible to make it more widespread.

Crump said The Giving Wall will be in beta mode for the first few months after launch.

“If it’s helpful, we will iterate as needed here, and look to expand into other markets, potentially following those wherein a Mindful Mornings exists and has done good work rallying a supporter base,” Crump said.

This is just fantastic! Thank you, Becky and Reggie, for the hard work – RVA is such a giving community, I have no doubt it will be a huge success!