Brother International Corp. will fill 461,700 square feet in phase one of the Virginia I-95 Distribution complex at 4701 Commerce Road in south Richmond. (Photos courtesy of Colliers International)

The first phase of a sprawling spec industrial complex just south of the James has landed its first big tenant.

The subsidiary of Japan-based Brother Industries will take up all 461,700 square feet in phase one of the Panattoni site, which eventually will house a second, twin warehouse building next door for a total project square footage of 923,000. Phase two is also being built on spec.

Panattoni purchased the 62-acre site in summer 2017 from Phillip Morris for about $4 million. It launched construction on the warehouse buildings during the first quarter of 2018. 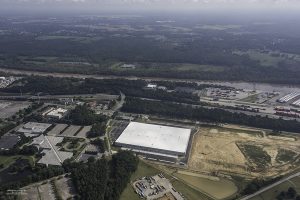 An aerial shot of the Virginia I-95 distribution complex.

Melfi said the company is determining how many people it needs to staff its new Richmond operation. While he would not disclose how much the firm is looking to invest in the operation, he said the amount would be “significant.”

The company, which will keep its U.S. headquarters in Bridgewater, New Jersey, operates distribution centers in California, Illinois and Tennessee. This is its first foray into Virginia.

“The facility in New Jersey primarily serves the Northeast,” Melfi said of the Cranbury site. “Moving the operation to Richmond allows us to serve the entire East Coast from Maine to Florida.”

He said the site’s access to rail, roads and the Port of Richmond helped seal the deal.

“Richmond gave us an efficient distribution point for our East Coast operations.” Melfi said. “The access to Interstate 95 and the port were all important factors for us coming to Richmond.”

The site also sits in an enterprise zone, which allows the company to seek state grants for job growth and development, and rebates for machinery and equipment.

Melfi said Brother is not currently seeking any additional incentives from the city. 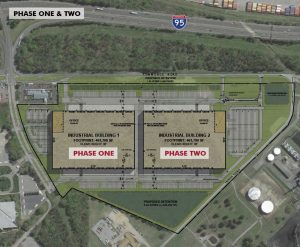 Phase II of the Virginia I-95 Distribution complex is underway and should be ready by August for occupancy.

With phase one fully leased, Anderson said California-based Panattoni is readying phase two for occupancy by August. It’s being marketed to potential users for parts of or the entire facility.

William A. Hudgins, who oversees Panattoni’s Mid-Atlantic division, did not return a call or email for comment Tuesday afternoon.

The company’s Richmond site will serve as a primary steel fabricator as it expands its foothold throughout Virginia and the Carolinas, and will employ about 70 skilled laborers.