A mammoth $66 billion bank merger announced Thursday morning has the potential to bring a wave of changes to the Richmond banking and finance scene.

Should Atlanta-based SunTrust and Winston-Salem-based BB&T combine as planned later this year, the deal would involve a combined 75 local branches and nearly $8 billion in combined local deposits, along with major mortgage, investment banking and wealth-management operations from both companies that are based in Richmond.

That includes each bank’s three dozen branches around the region. SunTrust’s 39 local branches hold around $4.5 billion on deposits, while BB&T’s 36 area branches house about $3.1 billion in deposits.

Their combined local market share would be second only to Bank of America and catapult it past perennial No. 2 Wells Fargo.

In addition to their local retail branch operations, SunTrust has a major operation in Manchester, where the headquarters for its mortgage arm resides. 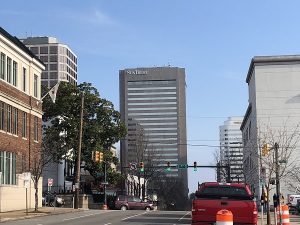 The two companies employ a combined 4,600 workers around the region – 3,800 at SunTrust’s local outposts and 840 at BB&T, according to the most recent figures from the Greater Richmond Partnership.

And both companies have their names on buildings downtown – with SunTrust’s atop its namesake SunTrust Center at 919 E. Main St. and BB&T’s across the face of one of the Riverfront Plaza towers on East Byrd Street.

For now, it remains unclear how things will shake out in Richmond, as spokesmen for BB&T, which is technically the acquirer in the deal, said Thursday it’s too soon to say what changes will come in specific local markets.

What is known is that the combined banks would have $442 billion in total assets, creating the sixth-largest bank in the U.S. As they stand today, the banks have a combined 3,100 branches along the East Coast, though many of those are likely to be consolidated, as is typical in bank mergers.

Their combination will bring a new bank brand to all of the markets in which they operate. Calling the deal a “merger of equals,” the company said they will operate under a new name, which has yet to be determined. 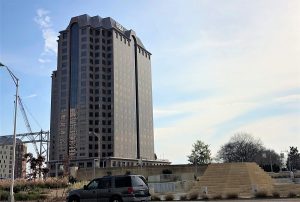 The firms will open a new combined headquarters in Charlotte, North Carolina, while maintaining a presence in the current respective hometowns.

SunTrust is using Goldman Sachs and Robinson Humphrey as its advisors, and Sullivan & Cromwell as legal counsel.

Current BB&T Chairman and CEO Kelly King will lead the combined company until September 2021, when he’ll become executive chairman. At that point, current SunTrust head William Rogers will take the helm. He’ll serve as president and COO until that time.

This is very. very bad news for RVA. SunTrust already has been shifting its mortgage division’s call center jobs oversees and rumor is the new bank will move the mortgage operations OUT of RVA. This is on top of layoffs and closing of branches and reductions at the regional headquarters that will happen as we have a huge overlap in our area. Our SunTrust regional staff was large as we were so far from Atlanta but with the new headquarters in Charlotte look for this to be loss similar to when we lost Dominion Bank or Central Fidelity or Wachovia… Read more »

I agree it doesn’t look good for the region. Reading though their merger disclosure it looks as though they’ll focus the majority of their operations in Winston-Salem and Atlanta with headquarters in Charlotte. I fear this is going to pull a lot of good jobs out of Richmond.