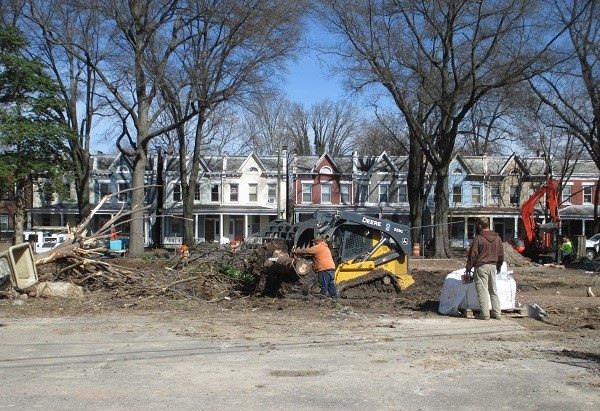 An infill residential development underway near Carytown is signaling the return of a homebuilding industry veteran.

Site-clearing work was underway last week along Ellwood Avenue just west of the Boulevard, where longtime local homebuilder Lloyd Poe is developing a cluster of five new attached homes and rehabbing an adjacent detached home at 2911 and 2917 Ellwood Ave., beside the parking deck behind The Byrd Theatre. 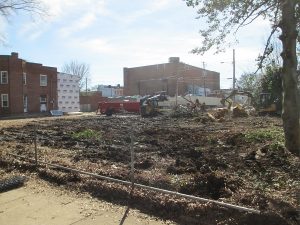 The property as viewed from Ellwood Avenue. The Byrd Theatre is visible in the background.

The project is the most visible sign yet of Poe’s return to the business after his retirement in 2016, when he sold the two companies he founded: Midlothian-based LifeStyle Home Builders and Mechanicsville-based CraftMaster Homes.

After spending six months playing golf and traveling, Poe said he realized retirement wasn’t for him.

“Once you get homebuilding in your blood, it’s hard to get rid of that sawdust,” Poe said.

“Retirement’s not for everybody, and apparently everybody knew I wasn’t going to like retirement, but me,” he said, laughing. “After six months, I figured it out.”

Getting back in the game

Last year, Poe launched a new company, Richmond Hill Design Build, which he described as a joint venture with LifeStyle’s Kevin McNulty, who purchased the firm after working under Poe there for years. As sole owner of Richmond Hill, Poe said he provides the financial backing for projects that LifeStyle then builds – a scenario that he said he’s enjoying.

“I can do something with Kevin on a joint venture, which gives me a lot of freedom and a lack of employees and time constraints that you have to have when you’re running a company,” Poe said. “I got back into the business in a different way than I was in it before.” 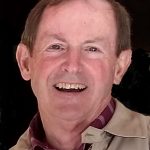 Since launching Richmond Hill last spring, Poe has led development on a new house, and several rehabs and additions, in the city’s Northside. The 3,000-square-foot house built at 3621 Hawthorne Ave. sold last week for $595,000, he said.

Poe said Richmond Hill will focus on residential projects inside the city, including older-home rebuilds, additions and remodels, and teardowns for new construction.

The Ellwood Avenue project includes both new homes and a rehab, with plans calling for five new single-family attached dwellings, ranging from 2,450 to 2,550 square feet. The existing detached home at 2911 Ellwood Ave. is being rehabbed with an 800-square-foot addition, bringing its total footprint to 3,000 square feet, Poe said.

Three of the new homes will total four bedrooms and 3½ bathrooms, while the remaining two will have three bedrooms and 2½ baths. The three larger homes will include first-floor master bedrooms.

Each dwelling will include two parking spaces off a rear alley. Plans submitted to the city describe facades with “traditional architecture” consistent with surrounding properties in the Museum District. Facades will include painted brick fronts, with front porches for three of the attached homes and covered stoops for the other two.

Poe purchased the nearly half-acre property, which consists of the two-story structure previously used as a day care and five adjacent lots of unimproved land, in late 2016 through an entity called Brattice Mill LLC. City property records show the multiparcel sale totaled $730,000. A special-use permit for the project was approved in 2017.

Poe worked with Mark Baker of Baker Development Resources, who submitted the plans on Poe’s behalf and represented him in the permitting process. The documents include elevation renderings and floor plans by Cobblestone Development Group, the business owned by house rehabber Josh Romano, who collaborated with Poe on several projects.

Poe said Romano found the Ellwood Avenue property for him but is no longer involved in the project. Romano, whose public profile peaked with a starring role in the HGTV pilot “Richmond Rehabbers,” since has filed for personal bankruptcy protection following two court rulings against his business and upwards of $750,000 in reported debt. 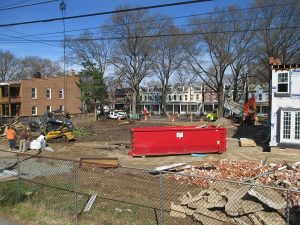 The property as viewed from the adjacent parking deck.

Poe said the new homes should be built and for sale by November. He’s selling the homes with Long & Foster’s Cabell Childress Group.

The homes add to other infill developments being fitted into areas around Carytown and the Fan.

A few blocks east, Danny Meyer of Dallan Construction developed six modern-design townhomes tucked between two alleys within a block across South Robinson Street from Cary Street Station. Farther into the Fan, Reid Pierce of Pierce Development is wrapping up work on three contemporary-style homes beside a 1920 house he’s restoring at 2409 Park Ave.

It’s difficult to keep a good man down! LLoyd Poe is a builder and builders build. It’s what they do. THe Museum district will be pleased to have him as part of our community fabric. He builds a great product.

This is the former playground when Ellwood House (now part of Tuckaway) had a 2nd location on Ellwood, correct?