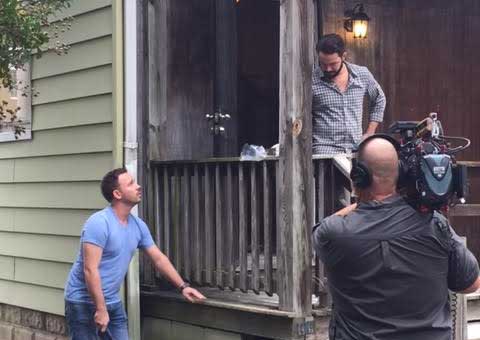 Facing two court rulings against his businesses and upwards of $750,000 in reported debt, a once-high-profile local house rehabber has filed for personal bankruptcy protection.

Josh Romano, whose Cobblestone Development Group was featured in last year’s HGTV “Richmond Rehabbers” pilot, filed for Chapter 7 protection in federal bankruptcy court on Oct. 31, the same day a Richmond Circuit Court judge was scheduled to determine damages in a lawsuit brought against Romano by a former client.

The filing lists nearly $770,000 in liabilities owed to 75 creditors, including Melissa “Missy” Bass, who was awarded just under $240,000 in damages in her lawsuit against Romano stemming from a renovation of her residence that she said was not completed on time and required $70,000 in repairs to finish and correct code violations.

Also listed in the filing are John and Sharon Coombs, former Cobblestone clients who likewise sued Romano for just over $23,000 in costs they say they incurred when Romano didn’t finish their renovation according to their contract, preventing them from closing on the house, which they ultimately never purchased.

Other debts listed include $100,000 to Lloyd Poe, a local builder who lent money to and collaborated with Romano on some projects; $100,000 to Jason Moneymaker, a local real estate agent; and $60,000 each to Howdyshell Flooring in Midlothian and Mid South Building Supply in Henrico.

Several creditors are listed with “unknown” debt amounts, meaning the total debt Romano owes could be higher than the $770,000.

A creditors meeting was scheduled Monday morning but wasn’t held because the federal courthouse was closed due to snowfall. Bruce Matson, a LeClairRyan attorney serving as interim trustee in the case, said Tuesday he had not yet been advised of a new meeting date.

‘My reputation has taken a hit’

Romano, who claims assets totaling $7,300 in the filing, said Tuesday he filed for bankruptcy at the advice of his attorneys, who he said advised that he had no choice but to do so in light of the judgments from the lawsuits. 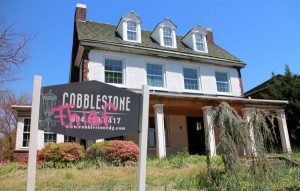 A vandalized Cobblestone sign earlier this year in front of one of several Romano properties that were deeded back to lenders. (Jonathan Spiers)

Romano said he has been unable to secure local work since finishing three homes that were the last of his remaining jobs after the bulk of his holdings were sold or deeded back to lenders this year. His bankruptcy filing lists combined monthly income of just over $6,400 and monthly expenses totaling $7,100.

Romano said he has turned in his real estate license and is no longer an agent with Oakstone Properties, the latest in a line of brokerages where he had hung his hat in recent years. He said he has also cut ties with Lloyd Poe, the local builder who he had described as a mentor, and is considering moving his family, including wife and business partner Breese, out of town to seek opportunities elsewhere.

“I didn’t want to hurt Lloyd or hurt anybody who was trying to help me,” Romano said. “Apparently my reputation now has taken a pretty good hit, so it’s not fair to anybody like Lloyd who’s trying to look out for me.

“I’m considering other markets. …We really need a fresh start. It’s been a pretty tough year for my family and I,” he said, reiterating past statements he’s made that he’s committed to working off his debts and paying back everyone he owes.

“I’ve got to get my family into a place where we’re good and stable … Once we get through that, my plan is to hopefully build again, build a company one more time, and hopefully build it the right way with better foundation and slow growth.”

Growing too fast is what Romano and others have said put him in this position – and put numerous subcontractors, homebuyers and others who worked with him in financial and legal difficulties of their own. 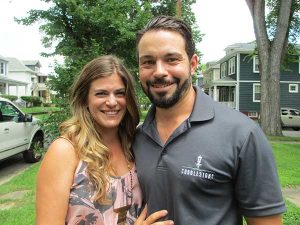 When the Romanos were set to star in the HGTV pilot, which ultimately was not picked up for a series, they had closed out 2016 having completed the renovation and sale of nearly 30 homes, according to Romano. By spring of this year, he said his property count had dropped from 20 properties at his busiest to less than five, after multiple properties and unfinished projects were foreclosed on or deeded back to lenders.

Bass, who originally sought $345,000 in her lawsuit, said her priority now is figuring out how to collect the nearly $240,000 awarded her: almost $115,260 in actual damages; the same amount in additional damages attributed in the judgment to “the willful nature” of Romano’s CNJ Ventures and other LLCs’ violations of the Virginia Consumer Protection Act; and just over $9,000 in attorney’s fees and costs.

With Romano’s bankruptcy filing, Bass’s and others’ lawsuits against him are stayed until further ordered by the bankruptcy court. Bass, who was represented in her suit by A. Blake Gayle of Zwerdling, Oppleman & Adams, said she has retained a bankruptcy attorney – Johnie Muncy with law firm Samuel I. White – to challenge the stay.

Meanwhile, the Coombses were awarded $23,247 in their judgment, which was made on the basis of breach of contract and fraud, according to a copy of the order in Richmond General District Court. They were not awarded attorney’s fees because they were awarded monetary damages on fraud allegations, and all claims against Breese Romano individually in their suit were dismissed with prejudice.

As was the case in Bass’s suit, all of the Coombses’ claims against Josh Romano individually were stayed without prejudice due to the bankruptcy filing. The Coombses were represented by Robin Morgan of Blackburn, Conte, Schilling & Click.

There will undoubtedly be a slew of comments here.

Here’s mine: unfortunately, a rolling stone gathers no moss. Unbelievable that he’s looking to set up shop in another town to do the same thing again.

Well, at least a simple google search will let people know what they are getting into.

The last article written said he was going to pay everyone back that he owed. He named 77 people in his Chapter 7 bankruptcy. There are probably even more that he can’t remember! That Chapter 7 wipes his debts clean. If he was truly going to pay everyone back, he would have filed a Chapter 13. You don’t rack up debt like that because you are doing the right thing, let’s get serious here. He also didn’t lose in court , with multiple fraud charges, because he’s innocent. Kudos to those who went to the mat to fight this guy… Read more »

Fascinating how the Romanos want to start over by moving. Meanwhile Salomonsky’s thieving self is still in Richmond, still involved in multi-million dollar developments, and people are still willing to work with him. Humans can suffer from some serious amnesia. I have no doubt Romano will bounce back. Less than ideal situation, but hustlers will keep hustling.

Is this Justin French 2.0? Too bad he won’t go to jail for scamming all these people. I like how he states “it’s been a tough year for my family and I” as if it hasn’t been tough for the 75+ creditors that he left out in the cold. Although on a positive note, maybe he will get a TV show after all, but instead of being on “Richmond Rehabbers” on HGTV, he will be on “American Greed” on CNBC.

This completely blows my mind! I’ve met Missy on numerous occasions at social and charitable events. She works hard. She’s an unbelievably giving person and has been through more in her life than you can imagine. To see that she’s been taken advantage of by this man, well, he deserves everything he has coming to him and then some. Way to go Missy and the Coombs family for not letting him get away with it!

You guys should repost all the praise comments from back in 2017(just 1 short year ago) just for the comic relief.

How this guy is not facing criminal charges is beyond me. This isn’t just poor timing or bad business acumen, this is a pattern of willful deceit.

There should be some sort of registry to keep people like this from just moving and scamming people in another state.

He got away without it because the banks aren’t creditors anymore. You also have to remember that Justin defrauded the banks (and state with tax credits) and they pushed for a criminal complaint. Romano gave the banks back the assets and I can’t see them (or any of these companies in the filing) want to deal with the headache of participating in a criminal probe. You notice no banks or lending firms in the filing. I am sure they were made whole but these firms and buyers, as someone else noted, are probably going to get nothing under the Chapter… Read more »

There were some banks mentioned in the filings. The filings look like a who’s who in Richmond real estate-vendors, subcontractors, former employers and employees, hard money lenders, attorneys, CPA’s, the list just goes on. Romano deceived a lot of hardworking, decent people. Two lawsuits didn’t bring him to his knees for him to file for bankruptcy. When there are 75 creditors, don’t blame 2. You brought this all on yourself. Blame the person who looks back at you in the mirror. That is the person who caused all your problems.

Sad because it seemed like a local success story. For a time they put out a quality product that energized several neighborhoods in Richmond. They presented an image of a family business, that image was used to defraud people. They did a lot of business in northern va before coming to Richmond. Perhaps they’ll go back up there. Cmon Richmond real estate community, ya’ll would open your arms to Justin French if he showed up again. Some of you still speak about him with stars in your eyes. Most of the people who were in business with him bought the… Read more »

From what I’m reading, this guy stole money from 75 different people. The Coombs, he stole their deposit money and Ms. Bass, he sold her a money pit that needed $115,000 worth of repairs? His excuse is that he grew too fast. No, you are a Thief. It’s plain and simple. Greed is a powerful drug. I’d be curious about hearing from Lloyd Poe since he did employ him and was also listed as a creditor. Also, I can’t help but wonder why no one has contacted the City of Richmond Building and Planning on how Ms. Bass’s house passed… Read more »

Wow! A friend forwarded this article to me and I can’t believe this guy. Just like she beat cancer a few years back, Missy conquered another Cancer. Good for her! Knowing what a laid back person she is, I’m sure she gave this guy every opportunity to make things right before she had to go to this extreme. Proud of her and the Coombs for doing what needed to be done. Sorry this happened to all of you, it’s truly a shame.

What a piece of work! No business sense and no soul. Just shaking my head in disgust

Charleston, SC is next. I’ve got it on good authority Josh has been making trips down there.

Actually, he is in my neighborhood acting like he doesn’t owe people money. Help!