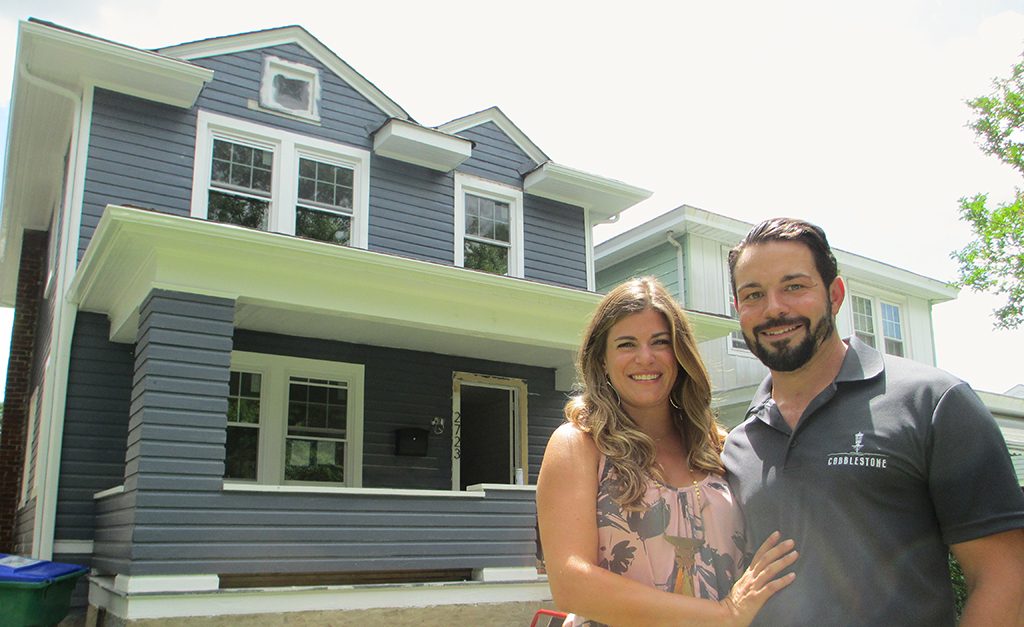 Breese and Josh Romano in front of one of the homes they restored in Richmond’s Northside. A different house in Battery Park is the focus of the episode they filmed for HGTV. (Jonathan Spiers)

UPDATE: The pilot episode is scheduled to premiere May 7 at noon on HGTV. An encore showing is scheduled for May 31 at 1 p.m.

Breese and Josh Romano are about to get their close-up.

The husband-and-wife team behind local home renovation and construction firm Cobblestone Development Group recently wrapped filming on an hour-long pilot episode for a show that’s set to air on HGTV.

If received well by viewers when it premieres this spring, the locally filmed show, called “Richmond Rehabbers,” could be picked up as a 13-episode series. The Romanos said they have agreed to a full season if HGTV elects to continue with the show.

“It was a lot of fun,” Breese said. “It’s easy to make a show if you’re doing something that you love to do and you do it every day.”

Comparable to HGTV’s “Fixer Upper,” the episode follows the Romanos and their crew during a four-month house renovation in Richmond’s Northside. The featured house – a two-story Foursquare built in 1919 – is located in Battery Park.

The couple, licensed real estate agents with Richmond-based One South Realty Group, worked with a family relocating here from Georgia who agreed to be featured in the episode. After being shown several options, the clients tell the Romanos what work they want done to the house they selected while working within a budget.

Clips show the Romanos shopping for materials at local architectural salvage depot Caravati’s, discussing the project with their team and providing their own commentary. The show also shines a spotlight on Richmond, with footage of Carytown, the city welcome sign along Interstate 95 and other local landmarks shown throughout the episode. 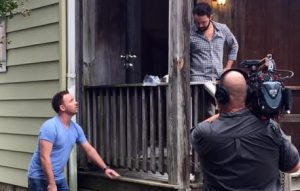 Josh Romano discusses the deck to be removed with a crew member during filming. (Courtesy Breese Romano)

Screaming Flea also produces the A&E show “Hoarders,” whose host, Matt Paxton, is married to a friend of Breese, the Romanos said. Paxton, a Richmond native who recently launched a new startup, suggested the couple to HGTV, which reached out to them for an interview over Skype, they said.

A four-minute teaser was filmed over four days, and the Romanos said theirs was one of two from among 100 or so submitted that the channel selected to film a pilot. The Romanos said they received compensation for the show but did not disclose details.

Josh, who started Cobblestone five years ago after starting out with Trustworth Properties, said he is looking forward to the exposure the show will provide his business, as well as local subcontractors and vendors that he and Breese, the designer on the team, work with on projects. He said Cobblestone worked with more than 100 local businesses in 2016, including Surface Architectural Supply, Wellborn + Wright, Shades of Light and Caravati’s.

“We intentionally went above and beyond to try to showcase Richmond and make that the forefront of the show,” Josh said. “That’s the goal, if and when we go to series, is to incorporate other small businesses and figure out ways to bring them into the mix and really focus on what’s happening here in Richmond.”

Added Breese: “When we first got news that we were going to do a pilot, one of the first things we said was, ‘This is going to be so awesome for Richmond.’ We both love this city.”

They said the Battery Park house presented several challenges. Nearly a century old, the structure was stripped down to its studs and enlarged with a two-story addition, and a deck was demolished. The Romanos said their clients wanted an open floor plan and asked them to focus on the kitchen, their daughter’s bedroom and their master bathroom.

When it came time for the big reveal, Josh said the buyers were happy, and tears were shed.

“It was intense. It was a really great experience for all of us,” Josh said.

“It also refueled our passion for doing the houses, because we were more involved than we have been in the past, because we’re trying to build a business. It actually brings you back into the fold, and you see what the guys are up against and it makes you appreciate the guys who are out there in the field day in and day out.”

The Romanos said they’re hopeful that the show will be picked up for a series when the episode airs, likely sometime around May. Josh said the episode would air multiple times over the course of several weeks.

While the show wasn’t something the Romanos sought out, they said they’re excited about the opportunity for Richmond as much as their business.

“We hope that it will showcase the amazing things that Richmond has to offer,” Breese said.

While the first to be featured in their own show, the Romanos are not the only local real estate professionals to appear on HGTV. Several episodes of the channel’s “House Hunters” series have featured Richmond real estate agents showcasing local homes, including Cabell Childress of Glen Allen-based Cabell Childress Group and, most recently, One South’s Alexis Thompson, who appeared on the show last fall.

Congratulations on the pilot and best of luck for the series.

when will this air ??

In May, I believe.

We met Josh several years back when he was just “getting his hands dirty” with one of his first renovations. As renovators and new home builders ourselves, it was refreshing to meet someone new in the business with so much passion and drive. Josh has been a great friend ever since. Once he was lucky enough to meet, fall in love with and partner with Breese, we knew they would be a force of nature. Josh and Breese are a most genuine, sincere couple who really do have a love for historic Richmond, and are dedicated to delivering high quality… Read more »

Congrats Josh. Can’t wait to check this out when it airs.

Josh and Breese, looking forward to the show! Congratulations! 🙂

Way to go, you two! This is awesome! I would definitely say you two have that ‘Chip and Joanna’ fixer upper love….but it’s so legit and super trendy too that it speaks for itself! Congratulations and so looking forward to seeing where this takes you and Richmond! And anything my husband and I can do to support, let us know! Again, congrats! Blessings abundant, The Coleman’s

Thanks for bringing the spotlight to RVA! Congrats!

Can’t wait to see! There is also American Rehab, Virginia, in Northern Neck Warsaw area featuring a plantation that has been handed down through the generations. I love this couple! I don’t know them but have a home in the area.

So exciting to see these neighborhoods brought back to life. This kind of activity is such a boost to not only homes and neighborhoods in the way of human capital, but also a significant economic driver. Great job Josh and Breese!

It would be interesting to see the appraisal on that home. Definitely a value outlier in Battery Park area.

From all of us at Savoy Properties congrats on your new show. Hope it goes well for you. Give me a call when you need balusters and I’ll turn them for you. Savoy Properties is also a historic restoration contractor and would love to contribute to the show. Thank you, Bill Pangburn 804-241-1955

Love this new show!! Is this Richmond va?

Wish you all the luck in the world!

I was watching HGTV and was surprised to see a show called Richmond Rehab. I remember Josh and his Dad from Loch Bramar where he grew up. MY boys grew up there too. Small world, Congrats on your success. Great Show

I lI’ve in Williamsburg, but am proud to call Richmond my homrtown. Love the history and the old homes that Richmond has to offer, also it has become a happening place for young professionals. I loved the show and Josh and Bresse, they seem to love what they do!

On my way to church this morning, I saw that your show was going to be on. I knew that it would be great because Richmond has some of the most beautiful old homes. If someone does not save these homes, they will be gone forever. Thank you so very much for saving our heritage and the beautiful homes that go along with it. I loved, loved your show!!

I am interested in possibly seeing if my company, A & J Spray Foam, could bid some of your spray foam insulation projects? Please give me or or my partner, Andrew Bailey (804) 386-2805 a call to discuss the options.

Jennifer, commenting on a 2+ month old post might not be the most effective way of contacting a business prospect. My advice would be to call or email them directly if you would like to pitch your services.

From the entire team of Network and Nibbles and Restaurant 6335, we support everything you do. We are so proud of you and keep doing all of that good work in your community.