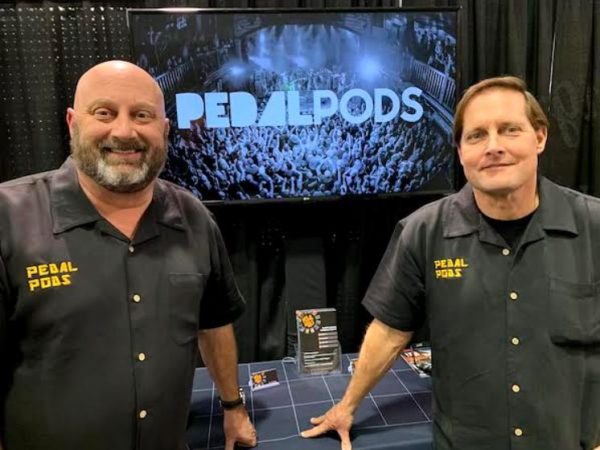 After hashing out the idea aboard one of their boats, a couple of local guitar enthusiasts are looking to make waves of another sort – soundwaves included – with their musician-minded invention.

Where traditional pedalboards require guitarists to mount and wire each of their effects pedals in place, Calder and Garrett said Pedal Pods are different in that they allow players to wire and mount each pedal to individual consoles, or “pods,” that can be easily swapped in and out to form personalized pedalboards. 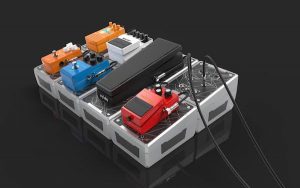 A rendering of an assembled pedalboard using Pedal Pods.

Garrett, whose family owns Garrett’s Marina in Tappahannock, has been playing guitar for over 35 years, while Calder’s been in the consumer electronics industry for about that long. The two met about 15 years ago when Calder brought his boat to Garrett’s Marina.

Garrett said he got the idea for Pedal Pods three years ago when he was in his basement, frustratedly swapping out pedals on his pedalboard.

“I had a new pedal but my board was full, so I wound up having to take one of my favorite pedals off,” Garrett said.

“I was sitting there and my daughter had left a bunch of Legos on the floor, and the idea hit me to build a board that’s interconnected so you can make your pedalboard larger or smaller at will, without having to restructure everything every time.”

Garrett brought the idea to Calder and they talked it over on Calder’s boat. Calder was in, and he suggested to not only make the pedalboard pods interlocking, but also to have each pedal readily wired for easy power connection.

Calder bought a 3D printer to design and create prototypes, and the two worked on the designs for two years.

“Rick’s the beauty and I’m the brains of the operation,” Calder said, laughing. “It’s been fun to work with someone you have fun being around.”

In January, Garrett and Calder took their product to the National Association of Music Merchants’ trade show in California, confident enough in their Pedal Pods to take them to see how critics, musicians and other manufacturers felt about their work. 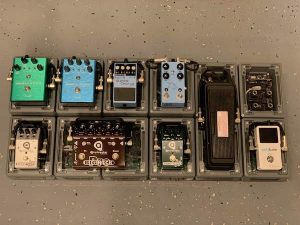 “Some people were coming (to our booth) kind of like people who watch NASCAR just for the wrecks. They wanted to see if we could do this,” Calder said. “But it was an overwhelming success, people loved the way it worked, how it could be reconfigured and they were surprised by the sound quality.”

Garrett and Calder said they are finalizing the designs and are aiming for an April launch. Calder said they’ve applied for patents on the technology and their application came back uncontested, so they hope to get finalized patents soon.

Upon launching, Pedal Pods will be available for purchase via a website for between $35 to $55 per pod. Garrett and Calder said they’re targeting guitarists such as Garrett who “play the county fair and down,” as Calder put it.

“People who play covers, at church and at bars. We still believe that will make up the bulk of our customers, but what surprised us at (the trade show), was interest from some sophisticated and well-known artists,” Calder said.

Garrett said they received interest at the show from two national music retailers, but they haven’t signed any deals.

“We also haven’t made any determinations for the manufacturing. We’re still evaluating where and from whom we’ll be getting them made,” Calder said.

Calder and Garrett mostly self-funded Pedal Evolution, with some other investors pitching in as well, they said. They did not disclose a startup cost.

The duo joked that the business’s headquarters are their garages, though they hope it reaches a point where an office is necessary.