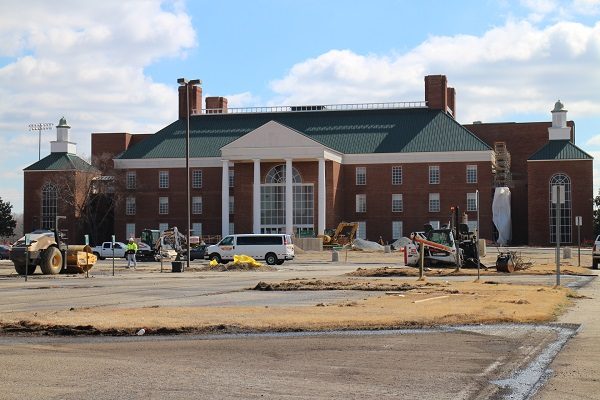 Crews were busy at the Colonial Downs site this week. (Photos by Jonathan Spiers)

The group behind the reopening of Colonial Downs in New Kent County is entering the homestretch of its push to bring horse racing back to the track.

Billboards and other ads promoting the track’s scheduled reopening this fall have started appearing around town courtesy of Lewis Media Partners, which is managing the marketing efforts of Colonial Downs Group, the investment group coordinating the $300 million effort to open the track along with four of five planned off-track horse-betting parlors across the state.

The group invited reporters this week to tour the Colonial Downs facility, where workers were busy resurfacing parking lots, laying flooring for an indoor smoking section and installing range hoods in the kitchen for Rosie’s Gaming Emporium, the brand of betting parlors that includes a location at the track. 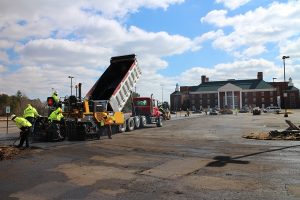 Work at the site started in October and is on track to wrap up in time for races to resume at Colonial Downs starting on Aug. 8, kicking off 15 days of racing scheduled through September.

Aaron Gomes, COO of JNB Gaming, which makes up Colonial Downs Group along with Los Angeles-based Peninsula Pacific Entertainment and former principals of the now-defunct Revolutionary Racing, said $150 million of the $300 million committed has been spent not only on Colonial Downs, but also the off-track parlors that are under construction simultaneously.

Those include the Rosie’s Gaming Emporium planned for the former Kmart property at 6807 Midlothian Turnpike, which broke ground in November and is scheduled to open in June. Other sites are underway in Vinton and Hampton Roads, and plans call for another site in Virginia Beach at a location that has yet to be determined.

Gomes said Colonial Downs will employ 400 employees by the time of its August opening, while the facility along with the Rosie’s locations are projected to employ 800 workers total. 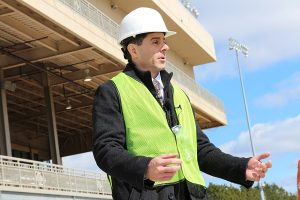 Marshall said the dirt track, which opens to horses July 25, is second in size only to Belmont Park in New York, while the turf track, at 180 feet in width, will be the largest in North America.

The Rosie’s gaming facility at Colonial Downs, where patrons can wager on live horse racing across the country, is slated to open in mid-April, and live racing at the track will include the return of the Virginia Derby on Aug. 31. Marshall said the facility could host additional events through the year, such as concerts. 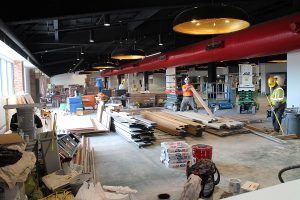 The Rosie’s gaming facility at Colonial Downs is scheduled to open in mid-April.

‘This is who we are’

Matt Smolnik, economic development director for New Kent, said the return of racing at Colonial Downs will benefit the county in more ways than one.

“This is who we are. I like to think of us as a rural locality with the horse tracks, the wineries, the golf courses – it’s our way of life. This business is going to generate the revenue to build our fire stations, expand our schools and provide the services for a growing population.”

Smolnik said the racetrack’s revival also is expected to spur further economic development, making up for lost revenue since it closed in 2014. He said the first year after the closure resulted in $440,000 in lost revenue for the county, but subsequent years’ budgets were adjusted accordingly. 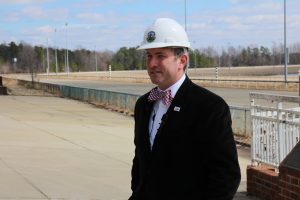 “We made do with (the closure) in lean times the last three or four years, but going forward, the things that this can bring is just amazing,” he said. “I think this is going to spur a lot of other development also – the retail, the restaurants, and to help those businesses who have survived the last four years without Colonial Downs here.”

Looking ahead, Smolnik said the return of Colonial Downs is the start of other big things to come for the county. Among them, he listed VCU Health planning a freestanding outpatient facility, and the county’s fourth winery, Jolene Family Winery, anticipated to open later this year.

“We’re looking for the big industrial development, we’re working on those, but we thrive on tourism,” Smolnik said. “For a county with 22,000 people to say it’s got a horse track, four wineries and four golf courses, that’s pretty good in my book.”