Dubbed in planning documents as “Project Isaac,” the development is being fast-tracked through the Henrico planning department.

The development would rise on about 73 acres fronting Portugee Road, with 50-foot buffers between QTS’ existing 1.3 million-square-foot facility to the north and the Facebook data center campus that’s under construction east of the site.

An interior rendering highlights about 17,000 square feet of office space in each of the buildings, with the remaining dedicated to several data halls – large open spaces that house a variety of computer server storage and network systems.

A tenant, or multiple users, for the facility were not disclosed in the planning documents. Neither a timeline for construction nor an investment estimate for the project was available.

QTS is a publicly traded data center operator that owns and maintains several facilities across North America and Europe, and one in Hong Kong.

The company’s White Oak Technology campus at 6000 Technology Blvd. caters to federal government entities, according to its website. The complex sits on 210 acres and has the capacity to expand by up to 1.4 million square feet.

In an interview last month with “Henrico Now,” a newsletter compiled by the Henrico County EDA, Snead said the county has been “attracting increasing interest as a connectivity hub” because of its proximity to Northern Virginia’s data center market, and its connection with the Virginia Beach Cable Landing Station – where the Telxius cables connecting data centers in South America and Europe come ashore.

Plans for QTS’ expansion in metro Richmond come as the firm makes sizable gains in Northern Virginia – one of the top data center hubs in the world.

That growth appears to be funneling southward, as White Oak continues to capture the attention of several data center facilities – the biggest being Facebook. 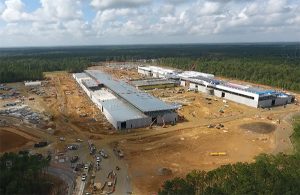 With QTS’ plans for a new complex underway, White Oak Technology Park soon will have more than 4.4 million square feet of data center space – the highest concentration of such space in metro Richmond.

Aside from QTS and Facebook, White Oak already is home to Hewlett Packard, Lumber Liquidators and Bank of America.

It’s not the property tax that was “slashed.” It was the machinery and tools tax ! That’s one of the reasons that Facebook is building at White Oak.

The decision was a game changer for Henrico County !