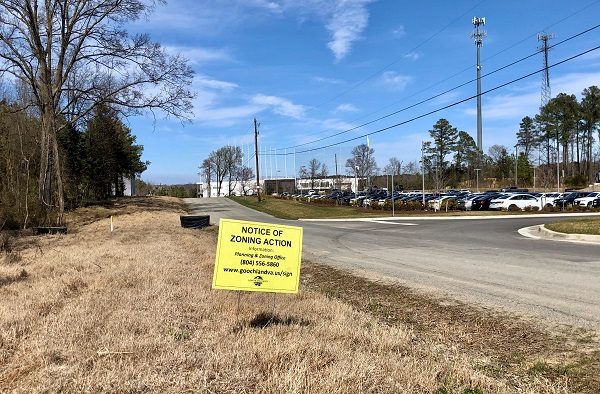 Larry Page, owner of the Page Auto Group, is seeking to rezone a 3.34-acre parcel at 1610 Three Chopt Road in Goochland County to a designation that allows for more height of commercial development. (Photos by J. Elias O’Neal)

Looking to capitalize on continued Short Pump spillover, the owner of a local auto group is in talks to potentially line up a hotel on land next to his Goochland Audi dealership.

Larry Page, owner of the Page Auto Group, held a community meeting Tuesday night at his West Broad Audi location at 12592 Broad Street Road, during which attendees were told of serious inquiries Page has received from hoteliers and developers to build on one of his neighboring parcels.

Jennifer Mullen of law firm Roth Jackson, who is representing Page in its rezoning of the property in question, said there is interest from those groups in constructing a six- to eight-story hotel on the site, or a mix of commercial uses that include a midrise hotel and some retail. 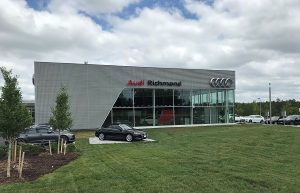 The 3.34-acre site is part of the Audi Richmond property Page assembled about two years ago. (Submitted)

With those ideas in mind, Page is seeking a zoning change and conditional use permit for 3.34 acres he owns at 1610 Three Chopt Road in Goochland County.

While Mullen and Page would not disclose many details about what groups are interested in the site, Page said they were enough to get the site rezoned.

“It presents a great opportunity for economic development for the county,” Page said. “We want to work with the county to get this done.”

Page acquired the rectangular property, which is bordered by Route 288 to the north, Three Chopt Road to the south and Broad Street Road to the west, in 2017 as part of his plan to build the Audi dealership and other commercial property.

Mullen said the group is seeking to rezone the site to B-3 — a commercial interchange designation that provides flexibility for building height along the Interstate 64 and Route 288 corridors. She added the group also is seeking a conditional use permit for a 0.56-acre parking lot formerly owned by the Virginia Department of Transportation at the corner of Broad Street and Three Chopt roads. The lot would provide parking for the Audi dealership and is included in the overall zoning request. 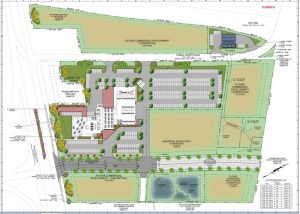 A site plan for the Audi Richmond redevelopment. Click to enlarge.

Mullen said the firm is working with Page to submit their request in the coming weeks.

The requests then must concurrently go through a series of public hearings with the Goochland County Planning Commission and Board of Supervisors.

If the Board of Supervisors approves Page’s request, which could occur this summer, it would be the first time a B-3 zoning would be granted since the county created the designation in 2007.

The site is currently zoned B-1 — a use that allows for a variety of commercial uses such as retail stores, service stations and office buildings by right, said Tom Coleman, the Goochland County principal planner who’s been assigned Page’s rezoning request.

Goochland County continues to capture commercial development along the Broad Street Road corridor, as developers follow the rooftops and high-income residents flowing into the county of nearly 23,000.

Those are the demographics Page was looking for when establishing his dealership in the vicinity a few years ago and when he set aside the 3-acre site for future commercial development. 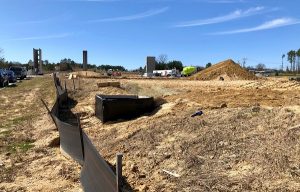 Work continues on a 130-bed Residence Inn by Marriott hotel that will anchor The Notch at West Creek retail development along West Broad Street Road.

Page has held on to more than 2 acres, mostly fronting Four Rings Drive, for additional retail development – although there are no immediate plans to rezone or develop the property.

Since he opened his Audi dealership in the county, the surrounding area has had a surge in new commercial development.

Work continues on the three-story, $25 million Drive Shack golf facility just east of the Audi property. Also, construction is ramping up on a new 130-room Residence Inn by Marriott hotel that is set to anchor 55,000 square feet of retail in The Notch at West Creek development across Broad Street Road.

Would this hotel be on Henrico county sewer and water or Goochland?