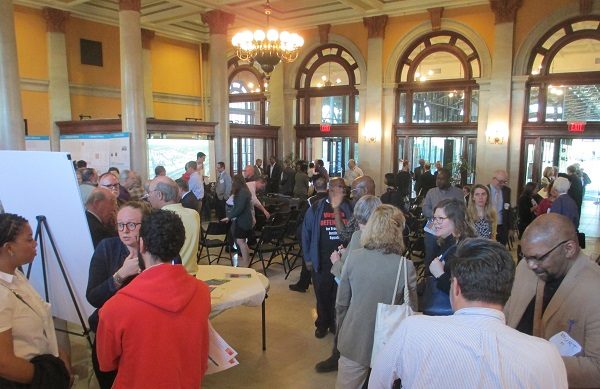 The group, consisting of city staffers, community members and preservation consultants, is tasked with guiding and implementing concepts and recommendations from past and present Shockoe planning efforts, including those aimed at memorializing the area’s history as the second-largest slave-trading hub in the country.

The initiative stems from last year’s visit by a team of city planners, developers and consultants who provided land-planning assistance through The Rose Center for Public Leadership, a joint program of the National League of Cities and Urban Land Institute. That group provided recommendations aimed at creating a “shared vision” for the Bottom that were likewise presented at the historic train station. 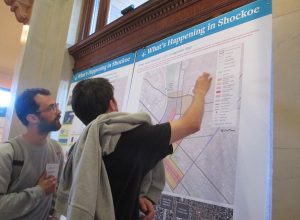 Attendees were invited to meet with consultants and review planning materials during the event.

Suggestions from that effort last year included using Main Street Station to house a previously discussed slave heritage site or museum, locating a school in the area with an urban agriculture curriculum and assigning a full-time city staffer to help implement those and other recommendations.

Members of that group are represented in the Shockoe Alliance, which also includes representatives from the city’s Slave Trail Commission, the Sacred Ground Historical Reclamation Project, Preservation Virginia, Shockoe Neighborhood Association and Shockoe Business Association. The group also plans to work with the city’s History and Culture Commission on recommendations and implementation.

As part of the initiative, the city planning department is working with the group to implement in the area the city’s Pulse Corridor Plan for development along the GRTC Pulse bus rapid transit corridor, which runs along Main Street and includes areas around Main Street Station. The new plan also would pull from the Richmond 300 master plan and past studies of the area.

Called the Shockoe Small Area Plan, the effort will involve at least three more planning sessions, dates and locations for which are to be determined. More information is available via the planning department’s web page.

“The new plan also would pull from the Richmond 300 master plan”?? How can this plan pull from, or build upon, a Master Plan that still does not have draft goals or strategies?? The Richmond 300 site says those draft goals will come out in the fall 2019. Richmond 300 will be adopted sometime in mid-2021. This is the 4th or 5th initiative by the third Mayor in the last 15 years and we are still “planning.” My applause to Sacred Ground who despite having a great vision ignored are still working with the City.