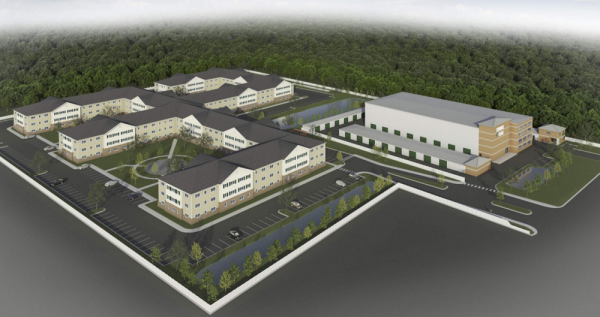 Kemps Village will include up to 245 age-restricted apartments and an additional storage facility. (Renderings courtesy Youngblood, Tyler & Associates P.C.)

A hybrid development is in the works to bring hundreds of senior apartments and even more self-storage units to a stretch of Hull Street Road.

Virginia Beach-based Kemp Enterprises has proposed to develop as many as 245 age-restricted apartments and a 175,000-square-foot self-storage facility on about 12 acres at 5336, 5348 and 5400 Hull Street Road, just west of Warwick Road.

The development, called Kemps Village, would be targeted to residents aged 55 and up, with the storage units available to both apartment dwellers and other area residents and businesses. The storage facility would be separate from the apartments but included as part of the same development.

The planned storage facility near the development.

Kemp Enterprises, tied to Virginia Beach-based GBK Builders, has owned the three parcels that make up the acreage since around the turn of the century. City property records show it paid $140,000 for one of the parcels in 1999.

That parcel includes a dilapidated structure along the street, while the rest of that land and the other two parcels are unimproved and wooded. The site is adjacent to the Meadow Creek Apartments to the east and single-family neighborhoods to the north and west.

George Kemp serves as president of both Kemp Enterprises and GBK Builders. Attempts to reach him for comment were unsuccessful.

Kemp is working on the permit application with William Gerwitz of Youngblood, Tyler & Associates, a Mechanicsville-based engineering firm. Gerwitz could not be reached for comment. Richmond-based RenderSphere created renderings for the project.

Plans submitted to the city show the apartments will be housed in three- and four-story buildings that would fill the bulk of the property, while the four-story storage warehouse closer to the street would include both climate-controlled and unconditioned units, elevators and three single-story perimeter buildings with additional units accessible from outside. Up to 300 parking spaces would be included on-site.

The documents state the apartments would house one or two residents each, with floor plans ranging from 675 to 972 square feet. They do not indicate rent rates for either the apartments or the storage units.

The project adds to other signs of investment in South Richmond. About a mile away, Colonial Downs Group is developing one of its Rosie’s Gaming Emporium locations at the former Kmart site at 6807 Midlothian Turnpike.

That’s an ambitious project for an area of the City that needs a shot in the arm. Few age restricted apartments take on more than 150 units at a time. But welcome to Richmond George Kemp! We look forward to your success.

Interesting marketing scheme. When you downsize you can still take all your junk with you!