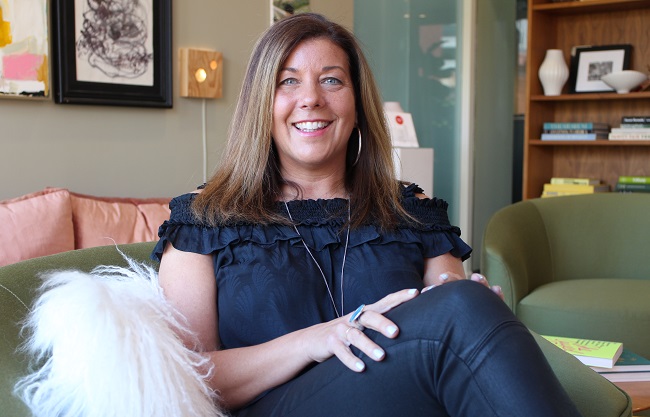 Kristen Cavallo in her office at The Martin Agency. (Photos by Jonathan Spiers)

When Kristen Cavallo was named CEO of The Martin Agency in the midst of a #MeToo scandal in late 2017, the marketing strategist and 25-year industry vet had less than 24 hours to wrap her head around the idea, let alone come up with a game plan or entrance strategy.

Happy in her job as chief strategy/growth officer with fellow Interpublic Group agency MullenLowe, which had allowed her to work from and remain in Richmond after an earlier, 13-year stint at Martin, Cavallo said she was hesitant for a moment but then jumped at the challenge – just as her military father, who just recently passed away, had effectively trained her and her siblings to do.

Her handling of that crisis and steering of the agency through the past 16 months, in which time it not only retained clients but also picked up new ones, have garnered Cavallo a string of industry accolades.

Trade publication Ad Age recently named her its Executive of the Year for 2019, on top of naming Martin one of the year’s standout agencies. And locally, she shared Ad Person of the Year honors from the Advertising Club of Richmond with chief creative officer Karen Costello, likewise the first female named to that role in the agency’s 54-year history. 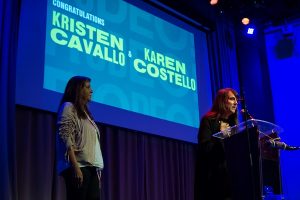 A self-described Army brat who settled in Richmond during her first stint at Martin, Cavallo sat down with BizSense to discuss her sudden return to the agency, her approach to the gig in light of the circumstances, and how she balances creativity with her role on the business side of the company. The following is an edited transcript:

Richmond BizSense: Congrats on your recent accolades. Have they given you pause to reflect on the past year and a half? What do they represent to you?
Kristen Cavallo: We’ve done so much that I don’t think it’s any one thing that’s landed us in this spot. I think it was a cumulative effort by a lot of people doing a lot of different things. Mostly, to me, it’s a reflection of courage and risk-taking, but also about trust and reconciliation. All of that was hard-fought for.

This past year and a half has been the highlight of my career. Not the award, but the work, and the opportunity. It was even more so because I was not gunning for it. I was not interviewing for it. I had no plan. I knew only about 21 hours before where I was going to be.

I am proud of myself, actually, and I am very proud of the people here and the team we have built and the openness with which they received me and embraced all the changes that we went on to make and decide together. It’s been a real team effort. There were no heroes in this. That’s the hard part about accepting a singular award, because there is nothing in advertising that is gained or won by yourself.

RBS: You said you didn’t have a plan, but how did you end up approaching the job and situation?
KC: My dad – maybe it’s military, or maybe it was just my dad – he taught my brothers and me to take accountability and to recognize that we could make an impact. There’s always been strains or threads of accountability, service, courage, that were weaved into us, and we were taught to run towards problems and not away from them.

I think there was a part of me that just naturally kicked into gear. I have not experienced a lot of management during crisis. In most of my years in advertising, there has been certainly change, but not crisis, so it would be the first time I would be able to apply those skills in that setting. But I think the same skills that enabled me to thrive at a company during dramatic growth were also used here: having stable legs on unstable ground; learning that when things get tough, you don’t jump out of the boat, you paddle harder; trusting your gut instincts on things and moving quickly. 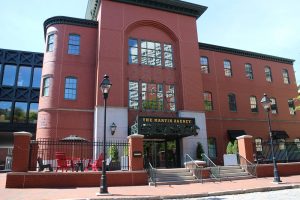 The other thing I found, and this would be in retrospect: Coming into a crisis situation, I would have thought that people followed vision, and I found that people followed availability more than they followed vision. I think vision sometimes feels very 30,000 feet in the air. People were feeling real anger and pain and fear, and they were feeling those things in their heart and in their head, and those are pragmatic little bastards. You’re not going to reassure or comfort or inspire something that pragmatic with something that removed.

I decided to fight those pragmatic things with humanity. I made myself extremely available. I told everybody in the agency that I would be available for coffee over the holidays – I started a week before the holiday break. And I will tell you, so many people took me up on it. I was so jacked up on caffeine, I don’t think I slept for a month.

I think that approachability and accessibility and humanity, I would hope, created a trust very fast, and I think they could also see that I was hustling hard. We had to save every client; we had to try to pitch and win; we had been dropped out of a number of pitches. There were some, though, that called us during that time, and we had to make sure that we won more than our fair share of them, because we didn’t know if we were going to lose any clients, and we wanted to show strength and momentum.

RBS: Having previously worked at Martin, what was your reaction to the reports about what was happening at the agency? Did it upset you? Did it sound familiar to you? When you were here before, did you see a culture needing to be changed?
KC: No. It was a surprise. Honestly, I didn’t spend a lot of time thinking about what had happened, other than there were opportunities for us to change some things and burn some bridges so that we didn’t walk back over them. From the moment I’ve been here, I have had my line of sight facing forward.

RBS: One of the first decisions you made was appointing Karen Costello as chief creative officer (replacing Joe Alexander, who was dismissed in response to multiple reported accusations of sexual misconduct). You were able to assemble the team that you wanted, but as far as letting other executives go, were those your decisions or was IPG making those calls? 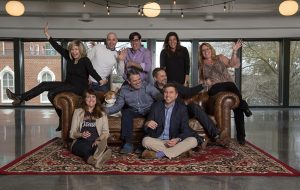 KC: That was IPG, and it happened before I got here. It happened before or simultaneous, so I didn’t have to make any of those choices and they were already made when I was factored into the equation. It wasn’t a discussion with me at all. The day I hit the ground running, I knew I had to assemble a team, and I kept some of the team intact from their leadership. I think stability is important in a time like that.

I would prefer that the story not be about the crisis, because we had a really great year, and we had a really great year compared to any other agency in the country. We beat some of the best agencies in the country for new business, we held onto our clients, we did great work, and it minimizes the impact of what this company has been able to do if we always reference it from a place of crisis. That moment (that) December is a defining moment, because it was a moment where we could pivot, but it is not a moment that defines us. It was not emblematic of who we were or who we are.

I don’t want to be the poster child of #MeToo. There’s this part of me that feels like if we could be the poster child of progress, I would be all over it, because what we’ve done didn’t actually require a crisis. Any company could do what we’ve done. The hard part is most companies won’t. All the stats about diversity in leadership leading to a better bottom line are fact, and it’s been true in every single Fortune 500 company that has put diversity in their leadership, by gender or by race, that they have outperformed their peers. And yet, not enough are doing it. There are 24 female CEOs in the entire Fortune 500.

RBS: How is your role as an executive shaped by the creative realm in which you work? Does being in a creative industry shape how you make business decisions, or vice versa?
KC: I think the answer is both, because I not only have to work to inspire and motivate and guide my staff of creative people, but I have to work equally as hard to motivate and encourage strategic risk-taking and trust with my clients, who often do not work in “creative” environments.

I have to do both, because if I’m only good at this side and not good at that side, it won’t work. I walk into every meeting feeling like I have 20 minutes to try to convince someone else to back my judgment with their money. I suspect that if I was a lawyer, I would probably say the same thing. If I lose people in the first 20 minutes of my opening argument, my odds of success are low. If I’m a startup company and I’m trying to get capital, they probably have less than 20 minutes. I think we all have to be persuasive. I think there are common threads.

RBS: How do you keep your own creative juices flowing, in the spirit of not getting too detached or involved in the business side? How do you remain part of the creative force here and foster that in your workforce?
KC: I travel. My kids and I have done all seven continents. We finished the seven when my daughter had just turned 15 and my son had just turned 22. But there are so many places we still have to go. My favorite question every year with the two of them is “Where next?” I am inspired very much by travel.

RBS: If you had the chance to ask anyone one question, who would that person be and what question would you ask?
KC: The question I would ask is do you believe in God and why. The belief is not as important as the reasons why, to me. I want to know if they trust in things they can’t see. I want to know if they can take a leap of faith, if they’re narcissistic, if they’re myopic in their point of view, if they feel gratitude. I think so many things can come out of a question like that, when you decide if the world revolves around you or something else.

I wish I could ask that question of all the people with whom I invest in, whether they be clients or staff or friends and family. I think it’s hard because religion is so loaded. I just think it tells you a lot about how they make decisions and what guides them.

RBS: What are your priorities for the next 16 months? What work do you feel still needs to be done?
KC: I want this agency to be a leader in progress and what it’s like to have a modern, progressive internal and external culture. I want the people that work here to develop ideas that they are proud of and that our clients prosper from and people talk about. I want the good guys to win.