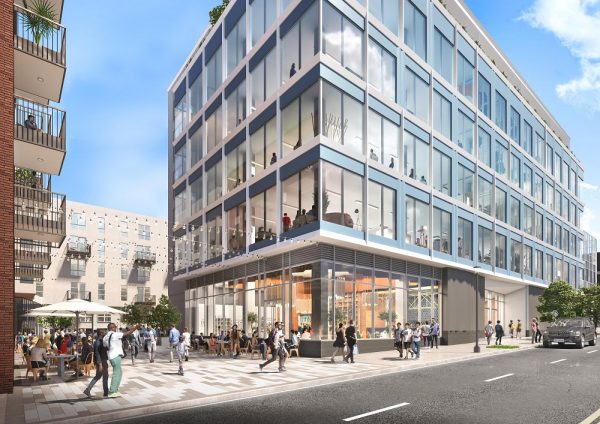 View of The Current development in Manchester via Hull Street. Lynx Ventures is set to break ground on the project $68 million in June. (Renderings courtesy Hickok Cole)

Now larger than originally planned, one of Manchester’s most ambitious mixed-use projects is preparing to break ground in June.

Richmond-based Lynx Ventures is moving ahead with The Current, a planned $68 million, two-building office, retail and residential project on a 2-acre surface lot at 400 Hull St.

The latest iteration has added size and height to the office portion of the plan compared to what Lynx announced last spring. What was envisioned as a five-story, 40,000 square-foot-office building rising near the corner of Fifth and Hull streets on the property instead will be a six-story, 70,000-square-foot structure.

A second five-story building near Fourth and Hull streets that will house 215 apartments on four levels above 10,000 square feet of ground-level commercial space remains part of the team’s plan. The Current will set aside about 20 percent of those units as income-based residences. 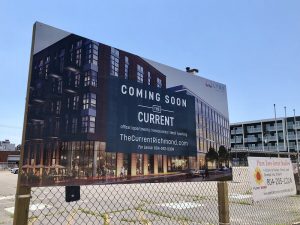 “At the end of the day, we are trying to do more than just build new apartments,” said Lynx co-founder Rick Gregory. “There is a bigger vision for The Current, which is why we decided to re-evaluate the project and make it attractive to investors.”

Also still part of the plan is 4,400 square feet of dedicated public courtyard space linking Hull and Fourth streets, as well as a four-story parking garage with up to 323 spaces, including 50 electric car charging stations that will connect the two buildings in the middle of the development, with access via Fifth Street.

The estimated cost of The Current, estimated to be between $50 million and $60 million originally—has risen to $68 million. It will be funded in part with the help of a new federal Opportunity Zone program that some local developers are scrambling to employ.

Lynx said The Current would use the Opportunity Zone program as another funding mechanism. 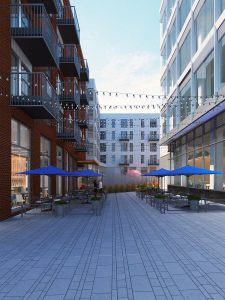 The program, which was created by President Donald Trump’s 2017 tax package and is overseen by the U.S. Treasury Department, reduces capital gains taxes for investors that help finance real estate projects in about 8,700 census tracts designated as Qualified Opportunity Zones across the U.S. and Puerto Rico.

State economic leaders mapped out the zones about two years ago, choosing about 25 percent of its low-income areas they deemed eligible for the designation by using a complex federal formula factoring in income and poverty levels.

“There were two schools of thought on how you nominate zones,” Gregory said. “One school would be to pick your most depressed and the other would be to find the zones that are up-and-coming areas. The state mainly took the latter.”

About 212 Opportunity Zones were created in Virginia, according to the Virginia Department of Housing and Community Development. While the program was created to help economically depressed areas, the Virginia zones chosen include several increasingly popular neighborhoods across Richmond such as Manchester, Church Hill, Scott’s Addition and Jackson Ward, as well as some that are beginning to grab the attention of developers such as Blackwell, Clopton and Maury.

Lynx’s Opportunity Zone fund for The Current is the first of its kind to be used in Manchester.

Lynx is using outside firms to raise equity for The Current, but Lynx partner Bernard Harkless would not disclose the firms involved. He said much of the development would be funded from equity raised in the Opportunity Zone fund, with the firm securing a construction loan to launch its groundbreaking.

Meanwhile, the federal government continues to update its guidelines for what types of projects qualify for the tax benefit, and what information fund managers must provide to investors and government officials. 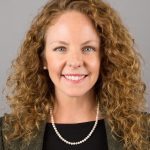 Kate Robertson, Lynx Ventures development manager overseeing components of The Current, said the office building would not be constructed on spec. She would not say if any tenants have signed on.

She said the apartment and office buildings would be built simultaneously.

Lynx has hired JLL to help it lease up the office and retail sections.

The Current is slated for completion around either the end of 2020 or during the first quarter of 2021, Harkless said.

Richmond-based KBS Inc. has been secured as the project’s general contractor. Hickok Cole is The Current’s architect and Kimley Horn is providing landscape architectural services. 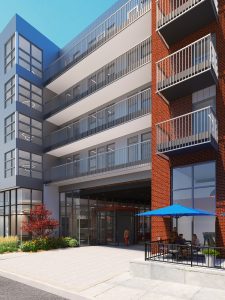 A proposed entry way to The Current via Fourth Street in Manchester. (Courtesy Illustrate My Design.)

With The Current being added to the mix, a four-block stretch of Hull Street between East Seventh Street and the Mayo Bridge is set to add nearly 220,000 square feet of office and retail space to Manchester in the next three years.

Demolition work is underway at the 3.74-acre site at 111 Hull St., as KBS construction crews ready for phase one of South Falls: a 14-story, 255-unit apartment building, which Vickers-Smith said would be ready for residential occupancy by 2020.

Once office projects are completed at The Current and South Falls, they will represent the highest concentration of new office development in South Richmond.

“It truly is a transformation happening in Manchester,” Gregory said.

The Current is the largest new construction project Lynx has undertaken since it was launched last year by Harkless, Gregory and his son John Gregory, adding to the company’s running tab of investment in Manchester and the surrounding area. 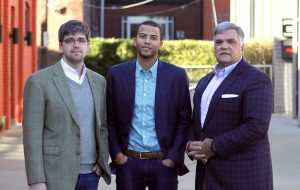 The company is overseeing the $14.4 million addition of 104 residential units at New Manchester Flats, a multiphased development it first launched with Fountainhead at 915 E. Fourth St. in southern Manchester.

“This is a fully economic development project with a focus on job creation,” Gregory said of Clopton Site Works. “We’ve got 700,000 square feet of commercial warehouse space that we’re developing into workspaces for medium-sized companies. Our goal is to create 500 jobs at that site … We’re only a third of the way in rehabilitating those properties and have over 250 jobs created, which is a huge thing for a neighborhood that’s been passed over for the past five decades.”

Other communities are noting Lynx’s push for job-creating projects.

Gregory said the firm is preparing to enter into a development agreement with the city of Winchester, Virginia, to redevelop Cameron Square, a downtown commercial promenade, with more retail and residential units.

“We were approached by Winchester because of the work that we are doing here,” he said.

The Winchester site also happens to sit in an Opportunity Zone.

“Our goal is to find those areas and give them that spark that’s needed to redevelop and rejuvenate,” Gregory said. “The Opportunity Zone is another tool to help facilitate economic development.”

Manchester will be home to the three biggest ground -up apartment deals in recent Richmond City history. Rivers Edge is just being completed and leased as WVS begins its larger tower down river four blocks. Liv Dev will soon break ground on another huge project on 6 acres of riverfront next to the Lee Bridge. Manchester is growing up in a big way.

I need to make that four, counting The Current

South Falls I looks like a 80s housing project with its tall, flat, white facade, and the CVL landscaping looks comparable to Short Pump Mall. I hope this isn’t indicative of the vision of Richmond’s future developers, absent of any Richmond character.