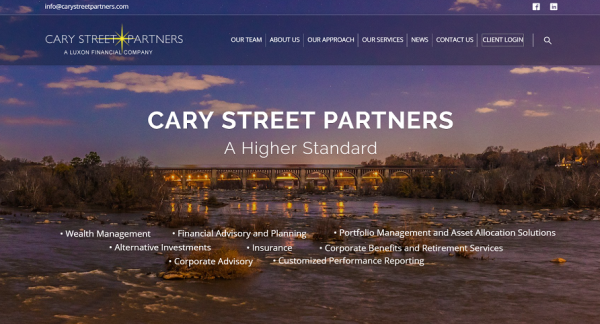 A downtown financial firm has signed its latest acquisition.

Tradition brings with it nearly $700 million in client assets under management – bringing Cary Street Partners’ total to around $3.5 billion.

Terms of the deal were not disclosed. Tradition partners Benjamin Halliburton, Michael Provine and Chris Trompeter, who founded their firm in 2000 out of Brundage, Story & Rose, now have an equity stake in Luxon.

Tradition brings about 20 employees who are now part of Luxon and Cary Street Partners’ roster of 110 staffers in 15 offices in six states. Those include its Richmond headquarters on the 10th floor of the Riverfront Plaza West tower, as well as an Innsbrook office it took on with its 2017 acquisition of Rafalko Advisors.

The Tradition brand will change as part of the deal, taking on the name Tradition Asset Management in the near term. Eventually it will adopt the Cary Street Partners brand.

Luxon CEO Joseph Schmuckler told BizSense last month that the firm will continue to search for deals and has a “healthy pipeline” of prospects in various stages of discussion.