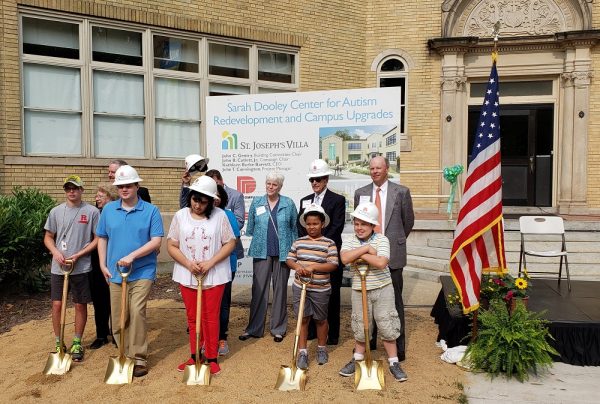 Students broke ground Wednesday for the upcoming redesign of the Sarah Dooley Center for Autism at St. Joseph’s Villa at 8000 Brook Road. (Photos by Josh Cozine)

Students of the Sarah Dooley Center for Autism at St. Joseph’s Villa donned hard hats and raised shovels Wednesday morning, breaking ground for a reimagining of their current building at 8000 Brook Road.

Elsewhere, at the Faison Center near Willow Lawn, a ribbon-cutting was held May 21 to open the new Flo and Tony Guzman Community Center for use.

The redesign of the 24,000-square-foot Sarah Dooley Center has a budget of roughly $9 million, which comes from a pool of more than $19 million raised through the school’s RiseUP capital campaign with the help of hundreds of donors.

The building, which has long served as a center for autism, was not originally designed to be used as such. The new redesign will allow for a safer space tailored specifically to the needs of autistic students.

Adam Dreyfus, director of the Sarah Dooley Center for Autism and autistic behavior specialist, has been working on plans for redevelopment for five years. He spoke at the groundbreaking, nearly choking up toward the end of his speech while sharing his hope for the redesign of the center.

“If you build it, they will come,” Dreyfus said, addressing a crowd of hundreds of students, parents, Sarah Dooley staff and community members. “Our location will make it easier for anyone interested in how to educate anyone with autism to come visit with us, partner with us and share with us. We can take this message across the nation as we manualize our approach so that all public schools can benefit from the work that we’re doing here.”

Kathleen Barrett, CEO of St. Joseph’s Villa, spoke further on the idea of operating the new Sarah Dooley Center as a guide for schools nationwide, and put the timing of the project into context.

“There’s going to be a tsunami of (autistic) students coming into the school system,” she said, citing the Virginia Department of Education, which reports that the number of students on the autism spectrum has increased drastically in the past 15 years. 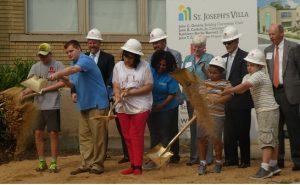 The Sarah Dooley Center for Autism serves 96 students a year on its campus.

“It will (act) like a ripple effect,” Barrett said, foreseeing the new Dooley Center working with other schools that then will reach out to even more schools.

The new Sarah Dooley Center builds on St. Joseph’s Villa’s mission to serve children dealing with developmental disabilities, mental disabilities, homelessness and other challenges. It serves more than 3,000 students a year on its campus through 20 different programs spread across its 82-acre campus and 16 buildings. 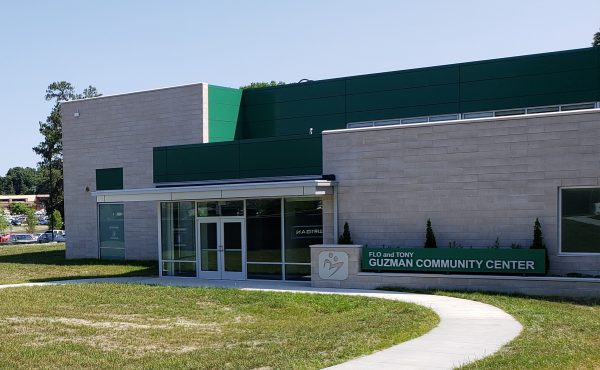 The new facility will serve as an indoor recreational facility for Faison Center students as well as a community center.

At the Faison Center, The Flo and Tony Guzman Community Center held its ribbon cutting on May 21, a year to the day after it broke ground on the 10,000-square-foot building. The facility now serves as both an indoor recreational facility for Faison Center students, along with serving as a large venue for community events.

“It allows us to focus on their physical health and well-being,” said Brian McCann, president of the Faison Center. 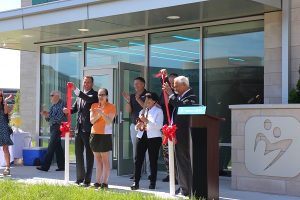 McCann noted that while there was a lot of focus on the mental health side of autism, there was less emphasis on the physical health aspect. Autistic children end up overweight and obese at nearly double the rate of the average population, he said — a statistic they hope to curb with the new center.

Consisting of a large open gymnasium-like area equipped with drop-down basketball hoops, the community center also boasts 10-by-10-foot projector screens for community events and can seat up to 400 people. Surrounding the large room is a number of smaller conference rooms that can be used to facilitate smaller events, or serve as a place for the Faison Center’s autistic students to escape to if they become overwhelmed in the sometimes large groups of exercising students.

McCann declined to disclose the total cost of the project, which was built by Hourigan. He said that the project’s donors preferred to remain anonymous. 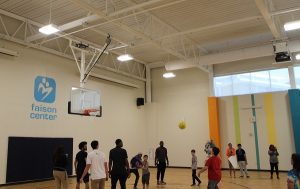 The new Faison Center consists of a large gym-like area that doubles as a space for community events. (Mike Platania)

McCann hopes that using the area as a community center will bring in people with no connection to autism into the Faison Center, which then can be used as an opportunity to educate more people about autism.

“We really want to bring people on to our campus that wouldn’t normally be here,” McCann said.

Faison also recently broke ground on another building that will replace its early education center with a larger facility that can serve twice the number of autistic students – from 16 up to 32 – and as young as 6 months old. The center also will help to accommodate students from nearby Westhampton Day School, which brings in students to help acclimate Faison’s special needs students to groups of other children. These visits help the Faison’s Center ultimate goal of being able to get students comfortable enough to fully transition into public schools.

“Thirty percent (of autistic children) may not need services by age 5 if we can get them in early enough,” McCann said, citing the Journal of Development and Behavioral Pediatrics. “That’s a big number. We want to help as many as we can make that transition.”

The new early education center will be the fifth building on Faison’s campus, bringing its total square footage up to 144,000, serving 350 students at capacity.