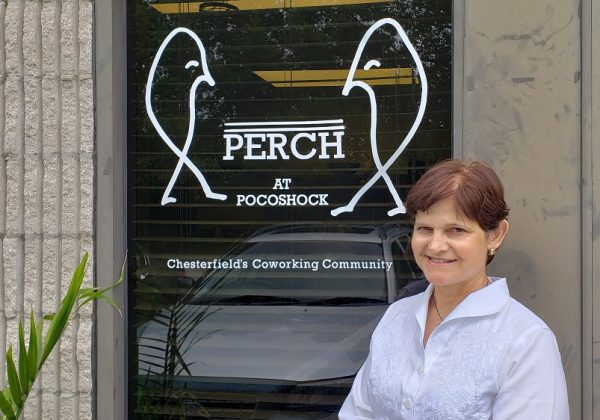 Coworking concepts have been catching on in Richmond in a big way, but so far they’ve been mostly concentrated in the downtown area.

Marni Pilafian is hoping to change that with the recent opening of her Perch at Pocoshock, a shared office venture in a commercial condo unit at 7617 Pocoshock Way in northern Chesterfield.

Pilafian said she got the idea to open a space in Chesterfield after talking with parents in the neighborhood who work from home but said they were worried about too many distractions.

“I asked them, ‘Why aren’t you going to Richmond to use their co-working space?’” Pilafian said.

She said many parents told her downtown Richmond was too far away from their kids if an emergency pops up. 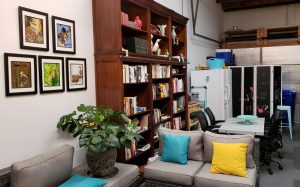 “So I realized there was a need for this kind of thing in Chesterfield,” she said.

Perch at Pocoshock sits in the middle of the Pocoshock Trade Center, surrounded by other businesses like printing, electronics repair and landscaping services. She sees the location as a convenient midpoint between the communities of central Chesterfield, downtown Richmond, Midlothian and Bon Air.

“At first I thought this was kind of a remote place, but I have found that there’s just as many people who can access it,” Pilafian said. “Some people told me, ‘Oh no, you need to be near (Chesterfield Towne Center), you need to be near the courthouse,’ but actually this is very accessible from all different angles.”

Pilafian, who has a background in real estate and property management, held a ceremonial grand opening for Perch on June 7 after months of renovations to spruce up the suite and make it more inviting. Previously, the space had been owned by Bastionpoint Technology — an IT company that focuses on small- to medium-sized businesses — before its recent move to 1617 Hull St. in Manchester. 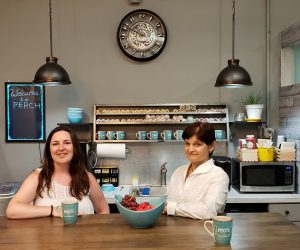 Pilafian and office assistant Cheralyn Potts behind the coffee and tea bar.

“It was dark with cubicles. Lots and lots of cubicles, and we took all the cubicles out and made offices as well as a large co-working space,” Pilafian said. “One of the first things we did was move the door of the bathroom to the other side so that it wasn’t the first thing that greeted people at the door.”

While renovations took several months to complete for the entire space, some of the offices were ready sooner, and Perch at Pocoshock had its first tenant two weeks after it was purchased. By the time of the grand opening, six offices, two conference rooms, a coworking flex space, a shared lounge and coffee and tea bar were all ready to go, and most had already been rented out with a few offices left available for June. All offices are now set to be rented out for the month of July.

Currently, conference rooms cost $25 per hour to rent out after a $199 per month membership fee that comes with two free hours a week of access to the coworking flex space and lounge area. Hourly scheduling for the conference rooms and coworking space is first-come, first-served to anyone paying the membership fee. Private offices run $512 a month, and parking is free.

The name, Perch at Pocoshock, was inspired by Pilafian’s pet parrot, who she always thought looked more attentive and like it was listening more to its surroundings when it was on its perch. She hopes that by bringing people together in the same space more people will have the chance to listen to each other, become inspired by one another and collaborate more together.

For the time being, the offices are mostly occupied by political groups, specifically democratic candidates for the upcoming 2019 election, as well as the chairperson for the Chesterfield County Democratic Committee. Democracy Summer — a fellowship program dedicated to helping democratic candidates win elections in swing districts — also recently signed up to rent out an office and several hours’ worth of conference room space. 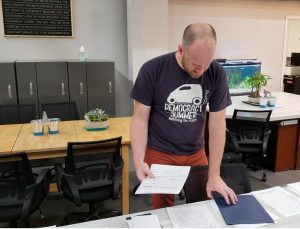 Matt Slaats, head of the Democracy Summer fellowship program, said the coworking space at Perch was ideal for the program’s needs, and has rented a private office as well as four hours of coworking space four days a week through Aug. 4.

“Before, when we’ve done the program, it’s been in gyms,” Slaats said.

Pilafian said that while this current election cycle has brought democrats to her doorstep, she’s happy to work with anyone who needs both private space and collaborative space.

Correction to the article above: for conference room space only, $25 an hour will secure Conference Room B. Please call for additional information. 804-477-5085