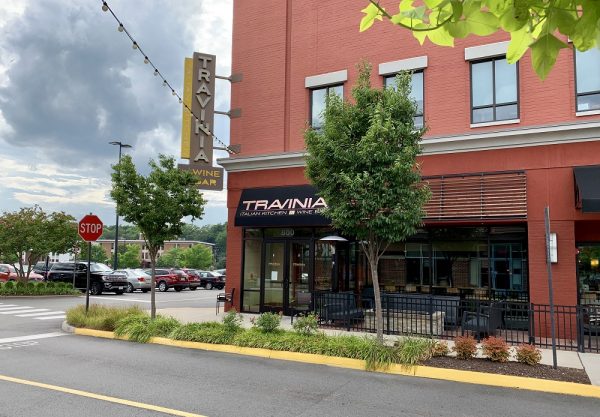 A restaurant chain’s five-year run at Willow Lawn has come to an end, prompted in part by the company’s recent bankruptcy filing.

The Travinia Italian Kitchen & Wine Bar location at 1601 Willow Lawn Dr., Suite 800 ceased operations at 8 p.m. Saturday, according to a sign on its door.

“We would like to thank all of the loyal guests who have made our location a great success,” the sign stated. “The staff and management will sincerely miss our Travinia family.”

The closure of the 7,000-square-foot Willow Lawn outpost coincides with Travinia’s ongoing Chapter 7 bankruptcy, which was first filed in March in South Carolina federal court. 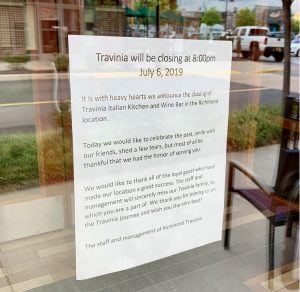 A sign in the door thanked customers for their patronage.

Court documents detail a process by which the firm agreed to sell off its three remaining Virginia outposts in Richmond, Charlottesville and Leesburg for $738,000.

Travinia first opened the Willow Lawn outpost in August 2014, boasting 50 wines by the glass, along with a variety of pasta and Italian dishes for lunch and dinner.

It was one of several new locations the South Carolina-based chain had opened in Virginia, along with spots in Newport News, Charlottesville, Leesburg and Woodbridge. It also had restaurants in North Carolina, South Carolina and Florida; and had planned to expand into Washington, D.C. area and Philadelphia.

The chain still lists three locations in Leesburg, Charlottesville and Lexington, South Carolina on its website. Each of those was still open for dinner service when reached Sunday afternoon.

What a shame, their carbonara was excellent! Plus it was a nice place to take clients in that part of the city.

That area seems to have issues keeping restaurants going. The Oyster Company is new, the sports bar at the corner seems to turn over a bit, and Travinia seemed like the anchor.
My thought would be that Willow Lawn might want to select a local chain or restaurant group, they don’t seem to have great luck with bigger chains.

Travinia has been a tremendous partner to Tee Jay Vikings Fund in our efforts to achieve our mission of supporting students & staff at Thomas Jefferson High school in Richmond, Virginia. We’re sorry to see that partnership come to an end. We continue to seek partners with a passion for our community. Visit teejayvikingsfund.org for more info.