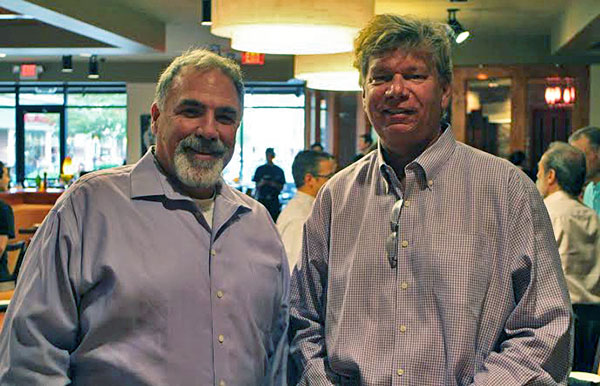 Co-owners Kevin Cox and Mark Craig are opening the Willow Lawn Travinia today after a soft opening for family and friends over the weekend. Photos by Michael Thompson.

Another new restaurant at the Shops at Willow Lawn is ready to pop the cork.

Travinia Italian Kitchen & Wine Bar opens today at 1601 Willow Lawn Drive. It’s the third restaurant to be added to a stretch of the shopping center that’s been redeveloped as a restaurant row.

Travinia will have more than 50 wines by the glass, along with a regular wine list and a reserve wine list for bottles. The restaurant serves dinner and will eventually add lunch. Travinia serves a range of Italian dishes, and pasta dishes on the dinner menu range from about $13 to $20.

“We came to Richmond because we think it’s a great market,” Travinia CEO Mark Craig said “We’ve had good luck in Virginia.” 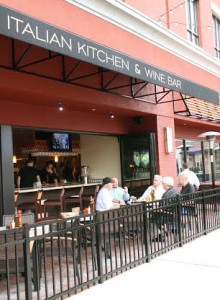 Travinia has indoor, bar and outdoor patio seating and is in the same group of storefronts at Zoës and American Tap Room.

Travinia has three other Virginia locations in Charlottesville, Leesburg and Woodbridge. There are nine other restaurants in North Carolina, South Carolina and Florida. A Newport News location is planned for the fall.

The 7,000-square-foot Willow Lawn restaurant joins the American Tap Room and Zoës Kitchen in a string of new eateries at the shopping center.

“There are so many restaurants in Short Pump it kind of seems over-built,” Craig said. “We like being closer to older parts of town.”

Duck Donuts, a doughnut chain based in the Outer Banks, will soon open a franchise at Willow Lawn.

Craig said he originally hoped to open in March but the date got pushed back when the HVAC unit proved difficult to install, and Travinia had to redraw its architectural plans for the space.

The wine bar also won’t be able to serve alcohol until Aug. 17 due to some paperwork issues.

It cost $1.75 million to open in Willow Lawn, Craig said. The venture was financed with a combination of tenant improvement money from the landlord, equity, and debt. The company banks with North Carolina-based West Town Savings Bank.

The restaurant will next look into open locations on the Maryland side of greater Washington, D.C.

With ‘Wine Bar’ in the name of my business, I probably would have held off opening until I could serve the wine.

Hopefully they will not have the same poor service and lackluster food issues as their new neighbor American Tap Room. Just read the reviews on Yelp….

When American Tap Room opened they didn’t have beer. Now a wine bar with no wine. Gotta start making back that 1.75m.