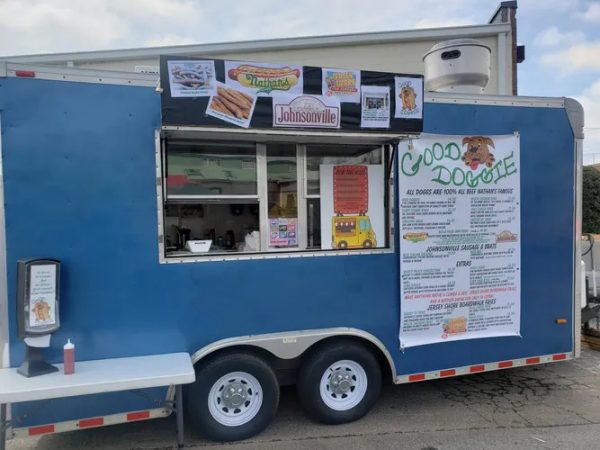 The Good Doggie food truck can be seen around the Richmond area, where it caters to special events and celebrations. (Courtesy Good Doggie)

After stalling foot traffic at their Chesterfield location set them off in search of a new home, the owners of a local hot dog shop have landed in Carytown.

Good Doggie, owned by Paul and Jenny Hook, is prepping to open next month at 3425 W. Cary St.

The Hooks launched Good Doggie as a food truck business nearly three years ago, before expanding with a brick-and-mortar spot in December of last year at 11552 Busy St. in North Chesterfield, near Chesterfield Towne Center.

They had initial success with the stationary storefront, drawing business from workers at surrounding construction sites. But once construction started to slow, they said foot traffic — their primary sales driver — slowed as well.

“We were on a hidden street across from the mall, and it kind of dried up when all the construction workers and electrical workers were done,” Jenny said.

“This kind of business depends on people and foot traffic,” Paul said. 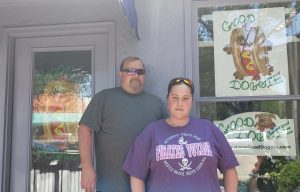 Paul and Jenny Hooks outside the new location for their brick and mortar iteration of Good Doggie in Carytown. (Josh Cozine)

Not to be deterred, the couple started looking for a new storefront. Regulars to Carytown, they knew the area was heavy with the kind of foot traffic they were after and started searching for open spaces in the area.

In early June, a friend of a friend of Jenny’s, commercial real estate broker Graham Sheridan of S.L. Nusbaum Realty, turned the couple on to the vacant 1,600-square-foot location. It previously had been occupied by Elements Beauty Shop & Elements of Carytown, which moved across the street into the Carytown Collective at 3422 West Cary St. in March of last year.

They ultimately signed a five-year lease for the location, got the keys in mid-June and began renovating immediately. They officially closed their Chesterfield location on June 15, and plan to have their Carytown grand opening coincide with the Watermelon Festival, Aug. 11, with a soft-opening a few days before to work out any kinks.

The couple would not disclose their lease cost and are doing all of the renovations themselves. Paul said he’s bringing a handful of employees with him from the old location to the new one and also plans to start hiring to build a team of five or six employees.

The Hooks each had spent decades in the restaurant industry in varying roles prior to starting their own brand. Paul put in 25 years in the management and food services side through Aramark, Pepsico and Yum! Brands. Jenny has been a food photographer for social media sites for other private companies, most recently UberEats. With Good Doggie, Paul handles most of the business side of things, while Jenny handles the company’s web and social media presence, and customer relations.

With four kids of their own, the Hooks say their main objective with Good Doggie is to be family friendly, especially in their prices. They plan to stick to what they called a tried-and-true business model upon arrival in Carytown.

“A lot of restaurants you’ll see that also have food trucks, they’ll charge one price for their food at the restaurant and another for their food truck depending on the neighborhood,” Jenny said. “We don’t do that. Our prices are our prices.”

And rather than increase prices to recoup moving costs, and cover the higher rent and food tax in Richmond compared to Chesterfield, the couple say they instead hope to lower their prices by selling more in Carytown.

“We’re taking our restaurant concept in the opposite direction of most,” Jenny said.

I used to visit the Dunkin next door to their Busy Street location pretty frequently. I would say, “I really want to try this hot dog shop!” every single time I went. The only problem? I never tried their shop because never ONCE was it open. The hours were odd and they were even closed when they were supposed to be open. I then started saying, “This place will be shut down soon.” And alas, here we are. I can now assume the limited hours was a result of no business which is a shame. Wish them all the best… Read more »

This is right around the block from my house and I’m pretty excited about the new addition to Carytown. With the new Publix going up, and all the new shops that are to come along with it, the western part of Carytown should be quite vibrant. Now if someone would open a good wing place we’d be set!