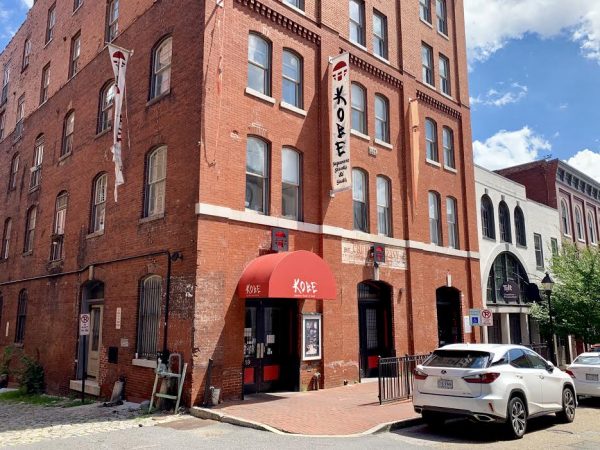 Kobe Japanese Steaks and Sushi closed earlier this week in the Shockoe-Cary Building at 19-21 S. 13th St. in the Slip. (Photos by J. Elias O’Neal)

It’s sayonara for a longtime Japanese steakhouse in Shockoe Slip.

Kobe Japanese Steaks and Sushi closed its location in the Shockoe-Cary Building at 19-21 S. 13th St. in Shockoe Slip after dinner service Tuesday.

A note taped to the door said the restaurant was permanently closed. 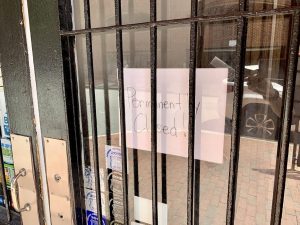 A note stating the restaurant is permanently closed.

Kobe was established in 2003 by restaurateur Ron Bloom in the five-story mixed-use building, which was a saddle-making warehouse until the 1970s.

Later owners included businessman Tadashi Yamaguchi, who owned Kobe in 2005; and Ian Sun, who owned and operated the restaurant in 2007.

Neither Sun or Yamaguchi could be reached for comment Thursday afternoon.

Kobe’s closure leaves a large commercial vacancy in the building that has had several owners since being redeveloped 16 years ago.

The building, which dates to 1877 and includes 16 apartments, was foreclosed upon in June 2016 after business entity Shockoe-Cary Building LP defaulted on a $2.7 million loan at the time. Northern Virginia-based 1877 Ventures LLC bought the building for $2.3 million in January 2017.

Vishal Tulsian, the registered agent of 1877 Ventures, could not be reached for comment.

Kobe was a longtime favorite for lunch, but the last three times my colleagues and I visited, we couldn’t even get seated. The last time, we stood around for 10 minutes as employees ignored us until we left.

Too bad. Kobe was a Shockoe Sip institution. Sadly, it was probably overshadowed by newer eye-catching restaurants. Richmond is littered with restaurants who never marketed their business and then closed when the general public forgot about them. Love it or hate it, everyone needs to advertise.

I would also say rent was likely a factor. If it sold as recently as 2017 to a NoVa company, I’m sure they’ve been asking top price to lease and if Kobe was already struggling with income due to their (recently) poor customer service, it all could have added up to this point