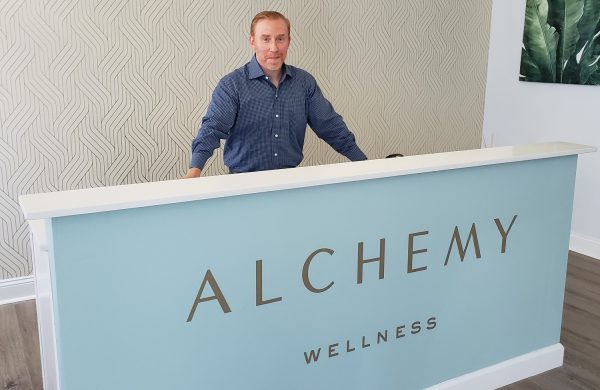 Emergency anesthetic-turned-1990s party drug, ketamine is now gaining traction as a way to combat treatment-resistant mood disorders. It’s also helping give rise to ketamine clinics in the Richmond area, with the latest entrant to the market launching last month in Henrico County.

Alchemy Wellness opened at 8639 Mayland Drive in mid-June. It offers intravenous ketamine infusions for mood disorders such as depression, PTSD, OCD and extreme anxiety as well as for chronic pain conditions such as fibromyalgia, phantom limb syndrome and other types of neuralgias.

Another ketamine clinic, Mind Peace Clinic – RVA, at 110 N Robinson St., across from Retreat Doctors Hospital in the Fan, opened in July 2017 after the success of its first clinic in Arlington the year before. It offers treatments on a part-time schedule Tuesdays and Thursdays, with the same intravenous services for mood disorders and chronic pain syndromes.

Dr. J. Randy Frederick at Alchemy Wellness, and Dr. Patrick A. Oliver at Mind Peace, shared similar stories of frustration at being unable to treat certain patients as their reasons for opening their respective clinics.

“As an ER doctor, I would see people in psychiatric crises all the time, and we can’t really do much for those people in the emergency room,” Frederick said. “It’s really just medical clearance then let the psychiatrist decide, and it’s not very satisfying.” 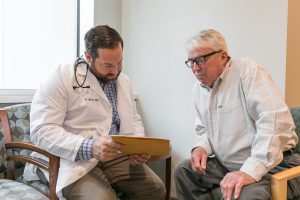 “I was really frustrated in the emergency department,” Oliver said. “Certain patients would come in, specifically suicidal patients, majorly depressed patients, and truthfully we weren’t really doing much if anything for them. We were just a holding place for them for the psychiatric ward, and even when they got there they were given pills that wouldn’t work for six to eight weeks. And these people were suicidal now.”

Known as both a safe and easy-to-administer anesthetic in emergency medicine since its discovery in the ’60s, ketamine was designated as a schedule III drug on the Controlled Substances Act in 1999 after recreational abuse was seen to cause health problems, including bladder diseases and cognitive issues.

Ketamine still is used daily in emergency rooms across the country. In the early 2000s, medical journals started publishing articles showing its effectiveness for treating mood disorders quickly and since then, it has been gaining acceptance for use off-label — that is, to treat a condition for which it has yet to be officially approved.

Frederick leased his 1,200-square-foot suite, formerly belonging to Tectonic Engineering Consultants, from Parham Park Properties through broker Lindsey Barden with Dark Horse|CRE. He designed the initial floor plan himself, adding three rooms for ketamine infusion, and enlisted the help of ENV Design and Nicole Rutledge Design in order to finalize the clinic and give it the spa-like appearance he envisioned to make patients feel more relaxed and welcome. 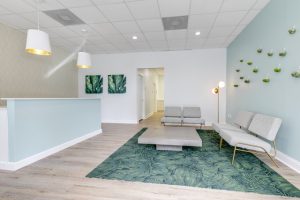 Alchemy Wellness was designed to have a spa-like feel to help patients feel more relaxed and comfortable.

Brain regrowth and the ‘ketamine experience’

While some of the science behind ketamine’s effect on mood disorders and chronic pain is still unknown, both Frederick and Oliver likened its effect on neurobiochemistry to an analogy of a tree regrowing its branches. Only instead of trees and branches, it’s brain cells (neurons) and their branchlike connections in the brain that are often damaged in people with these mood disorders or chronic pain syndromes.

“It regrows neural connections,” Oliver said. “If these brain cells are injured, whether it be from emotional trauma or physical trauma or something like that, we have found that ketamine can regrow their branchlike connections, just like a tree would regrow a branch in the spring.”

The way that ketamine does this, Oliver explained, is by blocking certain receptors in the brain, called NMDA-receptors, and activating other receptors, known as mTor-receptors. This blocking and subsequent activating of specific receptors in the brain then causes a release of certain proteins, known as growth factors, which causes the cells to regrow the connections. With the repaired branches, other chemicals in the brain, specifically Glutamate and GABA, are brought into a better balance, resulting in improved mood, decreased anxiety and more normal functioning overall. 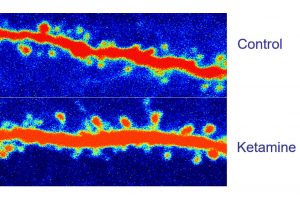 Two different images of neuron cells in lab rats show the before-and-after effects of ketamine treatments. After the treatments the cells can be seen to have more neural “branches.” (Courtesy Ronald Duman, PhD, Yale School of Medicine)

Frederick said another component of the treatment is ketamine’s known mind-altering responses.

The dosage levels administered in the clinics are well below the dosage typically used as an anesthetic, and patients remain conscious throughout the treatment. Remaining conscious allows patients to undergo what Frederick calls “the ketamine experience.”

This experience varies greatly from person to person, but is almost always mind-altering in some way, he said. For some it can be an out-of-body experience. For others it may cause a distortion of the senses, while still others may experience a feeling of “oneness with the universe,” Frederick said.

The experiences, Frederick said, can help people see their lives from a different point of view, which can help people break the cycle of being stuck in habitual negative thought processes, especially in depression.

Both follow the current industry standard for ketamine treatments, which for mood disorders is an initial series of six treatments over two to three weeks, followed up by the occasional “booster” treatment as needed. The “as needed” part will vary from patient to patient and depends on the affliction, but can range from every two weeks to several months. 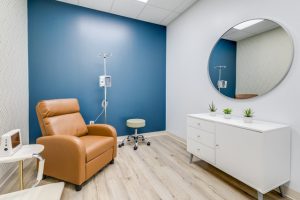 At the moment, no current health insurance providers cover ketamine infusions for non-anesthetic purposes, and costs at both clinics run $495 per one-hour infusion, meaning a standard course of mood disorder-related treatment will run around $3,000 before booster treatments, and the chronic pain syndrome course will cost between $4,000 and $5,500 before boosters.

For chronic pain syndromes, the infusions last longer at four hours each and run $1,350 at Alchemy Wellness and $1,750 at Mind Peace, and generally call for a series of three treatments in close proximity with boosters that tend to follow every two to three months.

To help alleviate some of the cost burden on patients, Alchemy Wellness offers 14-month, no-interest financing, while Mind Peace offers 0 percent interest financing through the Advance Care Card, a third party program that functions as a credit card for health expenses.

While ketamine itself is a relatively cheap, generic drug, both physicians cite overhead costs such as insurance, equipment costs, leases and staffing as what forces up the price. Both clinics employ qualified nurse practitioners to oversee each treatment, which also includes anywhere from an additional half-hour to an hour after the infusion is complete to make sure patients are fully recovered from any possible side effects before leaving. The most common side effect mentioned is nausea, which the clinics help treat onsite.

Both doctors said that none of the more dangerous side effects seen in high-dosage recreational use have been exhibited by patients receiving the lower-dose intravenous treatment, and both cite statistics of ketamine being effective for nearly 75 percent of patients, many of which previously did not respond to other treatments.

“We haven’t really had such a breakthrough in mental health treatment in more than 30 years,” Frederick said. “And that made it just amazing to me. And so I dug deeper, and it compelled me to act on it, so I opened Alchemy Wellness.”

Very thorough research for a business article (thank you Josh). I hope these doctors also have a method of determining if a patient is a potential ‘addict’ since ketamine has become easier to obtain on the street, and the disassociative effect of larger doses is (for some) a very sought-after ‘high’. My friend was prescribed ketamine capsules for chronic nerve pain associated with lyme disease, but he said the pain returned when the drug wore off. I hope that is not a trend, as it seems unmonitored use of this drug can have tragic consequences…

$3,000 – $5,000 for initial visit and then a couple of thousand a year or more in boosters. This is not covered by insurance because it is not FDA approved approved to actually treat you for depression as the article mentions. The nasal spray recently approved by the FDA that is derived from the drug, and you can get it from your doctor for much less with insurance, might be the better route first. And Sid is right very in depth article.

It isn’t covered by insurance because ketamine is a generic drug, so it can’t be patented. Because it can’t be patented, there is no profit incentive to pay for FDA trials, which cost millions to perform. Ketamine is a stereo-isomer, meaning it is composed of two mirror images of the same molecule. Esketamine, the FDA approved version (Esketamine = S-Ketamine, one half of the mirror image that is Ketamine), has performed more poorly in all trials so far, but isn’t a generic drug. Since it can be patented, there was profit incentive to go through the trials. This is an… Read more »