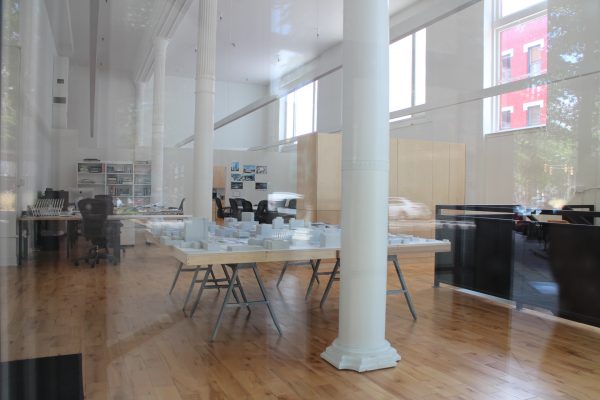 The studio at 1 E. Broad St., as viewed from the sidewalk. (Photos by Jonathan Spiers)

The details of what’s proposed to be the biggest economic development project in city history are being drawn up in the bowels of a downtown Richmond building.

As preparations for the planned Navy Hill redevelopment pick up steam at City Hall ahead of a formal proposal, the Coliseum-anchored project’s master developers have committed locally to the effort by setting up a Broad Street office, where one of the firms has relocated its West Coast headquarters.

Future Cities, the Michael Hallmark-led urban design firm that’s sharing master developer duties with Northern Virginia-based Concord Eastridge, has moved its home base from Los Angeles to Richmond via a studio the two firms have set up at 1 E. Broad St.

The nondescript storefront at the corner of Broad and Foushee streets contains desks, tables and what appears to be a 3D-printed mockup of a section of downtown, as well as wall-posted printouts of renderings that have been used to visualize the project in presentations and on Navy Hill’s website. 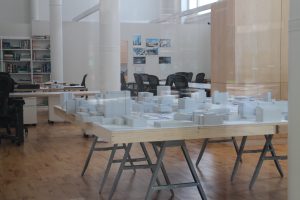 A 3D-printed model of what looks to be a section of downtown is displayed in the space.

The firms have occupied the space since last summer, signing a three-year lease as Capital City Partners, the LLC that the companies created for the project. Hallmark, who had been based in L.A. since founding Future Cities in 2000, said he has been residing in Richmond since 2017, the year the LLC was formed.

“We decided early on that it was necessary to have a physical presence here in Richmond, to be part of the community and to work with the local architects, contractors, brokers and existing businesses that know the city well,” Hallmark said in an email.

“From a personal perspective, and having now lived here for two years, we love the City and are confident that when we are finally able to share the full Navy Hill vision, that Richmond will love the plan we’re putting forward,” he said.

Future Cities’ website lists the Richmond address on its “contact” page, and Hallmark’s bio on the site acknowledges the firm’s relocation last year, describing the purpose of the move as “ … to lead a development team in the North of Broad project, a $1.4B mixed-use development that will transform that City’s urban center.” “North of Broad” is another name for the Navy Hill project. 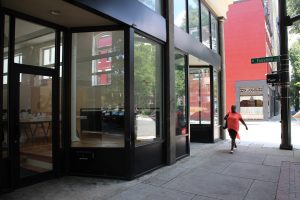 The space is at the corner of Broad and Foushee streets.

Totaling 1,900 square feet, the street-level space includes access to a 2,000-square-foot basement, which appears to be used as part of the studio. The space is housed in an apartment building owned by an LLC tied to Birck Turnbull, a local real estate broker and developer who owns and leases out several properties around town. A call to Turnbull was not returned.

The location is in a part of downtown shared by other design firms, such as Price Simpson Harvey next door on Foushee, Architecture Design Office a block east on Broad and Cornerstone Architects a block west. Walter Parks Architects and ArchitectureFirm are nearby on North Adams Street.

Plans presented by NH District Corp., the local group led by Dominion Energy CEO Tom Farrell that’s pushing the project, call for redeveloping that area with a new arena and a mix of uses to include 2,800 new housing units and a 23-story, 527-room Hyatt Regency hotel.

Plans also call for preserving and redeveloping the old Blues Armory building with a 20,000-square-foot food court plus entertainment and event spaces, replacing the GRTC transfer center along Ninth Street, and re-use of sites filled with outdated city buildings.

Late last week, rezoning applications to accommodate those plans were filed with the city planning department, setting the stage for those requests to be processed in time for a formal proposal to City Council. An introduction of ordinances would be followed by public hearings and reviews by the Planning Commission, as well as by an advisory commission recently appointed by council.

One of the Navy Hill renderings designed by Capital Center Partners. (Courtesy navyhillrva.com)

The applications seek to rezone 13 properties to the Coliseum’s CM zoning district. The Planning Commission is looking to update that classification to accommodate the project, having declared its intent to do so in December – a month after the project was publicly presented with an endorsement from Mayor Levar Stoney.

Future Cities and Concord Eastridge were retained as the project’s master developers a year earlier, when an investigation by BizSense revealed the project was in the works. As Capital City Partners, Hallmark said the firms are tasked “to conceptualize, finance, design and manage the redevelopment project, should it receive Council approval.”

A project description on Future Cities’ website notes the proposal to finance Navy Hill through a tax-increment financing (TIF) district, in which real estate tax revenue from new development in the district would be used specifically to pay for the project. Negotiations said to involve the TIF funding model have been ongoing between NH District Corp. and the city for months.

Plans have called for the TIF district to cover areas beyond the 10-block project area, spanning a chunk of downtown bordered to the west and east by First and 10th streets and to the north and south by Interstate 64-95 and the Downtown Expressway. The expanded area includes the new Dominion Energy tower under construction on South Sixth Street and the site of a planned second tower nearby.

Future Cities’ website describes the firm as “specializing in urban development and the programming and design of complex public/private sector sports and entertainment projects.” Its portfolio includes several arena-anchored projects, including the Golden State Warriors’ Chase Center in San Francisco, and a master plan and study for a new stadium development for Arizona State University. Hallmark also was the principal architect on the Staples Center in downtown L.A.

Concord Eastridge, led by CEO Susan Eastridge, has a track record as master developer on mixed-use projects involving conference centers, hotels and higher education facilities as an anchor. Past projects have included large-scale work for the University of Mary Washington, Virginia Tech and George Mason University.

Using the term “bowels” to identify the source of the Navy Hill project seems very fitting.

Are the big windows meant to give an allusion of transparency to this project?