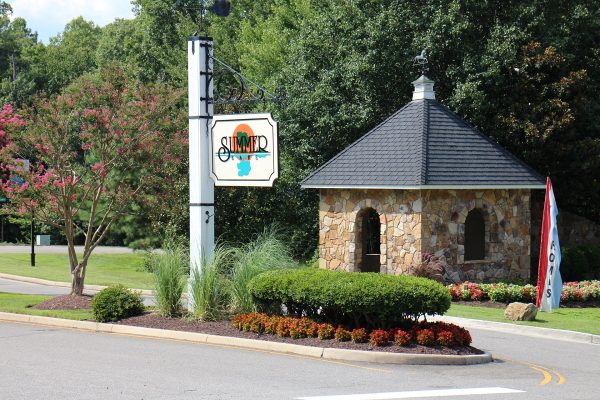 The entrance to Summer Lake off Otterdale Road. (Jonathan Spiers)

A years-long dispute between former business partners behind a residential community in Chesterfield County has returned to the courtroom.

Smith – who now goes by Dale Smith Martin and is a real estate agent with Joyner Commercial – alleges that, in the years following a falling-out with Camp in 2006 that involved previous lawsuits, Camp violated a settlement agreement by, among other things, creating two new similar-named entities in an effort to wrest control of and solely profit from Summer Lake’s development.

The suit seeks upwards of $20 million in damages.

Camp, whose other developments in the area include Chesterfield’s Chesdin Landing, has yet to formally respond to the suit, which was filed June 28 and served this month to Camp and Base Camp Holding LLC – the business entity behind Summer Lake that also is named as a defendant. Reached Friday, Camp would not comment on the record about the lawsuit for this story.

According to the suit, Camp and Smith shared ownership in that LLC, with Camp holding a 51 percent interest and Smith holding a 49 percent interest. The entity was created in 2001 to take title to the land that would become Summer Lake, which was divided into 14 tracts and planned to total about 645 lots.

After their falling-out in 2006 that resulted in legal action, Smith was dissociated as a member of Base Camp’s realty arm and entered into a settlement agreement with Camp, who it was agreed would continue to manage the companies for the sole purpose of completing Summer Lake. Future net profits from home sales were to be distributed quarterly between Camp and Smith as the LLC’s two members.

The suit alleges that Camp instead created two new similar-named entities “with the intent to usurp the Summer Lake project” from Base Camp Holdings, the LLC he shared with Smith, “to benefit himself at the expense of Smith and BCH.”

The suit states that Smith to date has not received any distributions as stipulated in the settlement agreement, despite the bulk of Summer Lake’s lots having been developed and sold. In 2012 – the same year Summer Lake hosted the regional Homearama showcase – a third party valued the remaining development profit at $20.68 million, according to the suit.

“It has become apparent that Camp is conducting operations of BCH, as well as the operations of his other business entities, in a manner to benefit only himself, to the detriment of Smith,” the suit states, adding that Camp has refused to provide the business’s books and records to Smith and has failed to provide notice of draws from its bank account.

Smith further alleges that BCH’s debt has exceeded $1.5 million after being reduced last year to about $200,000, and that Camp is using proceeds to finance other business interests unrelated to Summer Lake. The suit states “it is clear that Camp has misappropriated in excess of $401,000” from BCH credit lines in the last three years and diverted those funds to other business interests.

The suit also states that Camp has unilaterally rejected offers from builders to purchase lots, such as an offer from Schell Brothers in 2017 for “a significant number of lots” that Camp allegedly refused to sell because he was unable to secure a listing agreement. The suit states Camp sold only eight lots the same year through his solely owned realty company, to which he had transferred the BCH realty arm’s exclusive listing agreement.

Summer Lake’s website lists Biringer Builders, Covenant Building & Design and Ray A. Williams Custom Homes as firms actively building in the development today. Homes listed on the website as being for sale range from $475,000 to $636,000.

It seeks at least $20 million in damages, removal of Camp as manager and a member of BCH, dissolution of that company and an award to Smith of her pro-rata share of the fair value of the company. The suit also seeks a restraining order and injunctions preventing Camp from transferring any funds from the company’s bank account during the case.

Smith is represented by Williams Mullen attorneys William “Bill” Bayliss and Joseph Blackburn III. Bayliss would not comment on the suit without permission from his client. Camp is represented by Alan Wingfield with Troutman Sanders.