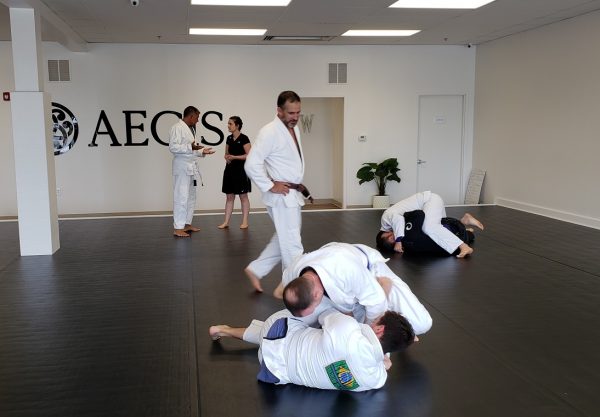 Students sparring at Aegis Jiu Jitsu while instructors watch and talk with other students. (Photos by Josh Cozine)

Started by married couple Dave and Christine Kenworthy, along with Richmond restaurateur Brett Scott, the school offers classes throughout the day, taught by black belt-level instructors, with a focus on self-defense. 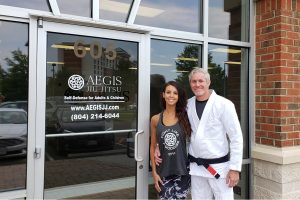 Dave and Christine Kenworthy outside of Aegis Jiu Jitsu in the Short Pump Towne Center.

“It had large open windows that let in lots of light and fit in with our design,” Christine Kenworthy said of the space. “We were striving for this bright and clean, and classy vibe.”

She serves as managing partner for Aegis and also does all of the company’s graphic design.

The group invested around $64,000 into renovations of the space, including furniture, equipment, rebuilding and other costs, not counting leasing. They hired contractor Brian Walton, who is one of Dave’s students and who works out of Ironhorse Builders Construction, to make over the interior into their bright, vibrant, spa-like vision.

“We didn’t want people to feel like it was a fight club. We wanted it to be a place people enjoyed coming, and felt more zen and calm,” Dave said.

Dave has studied Brazilian Jiu Jitsu for 16 years, achieving a black belt, and has been teaching it for seven years. He also has a background in business, owning Innsbrook-based recruitment and employment agency Cornerstone RPO, where Christine works as well, and where they first met.

“There’s just something about (teaching),” Dave said. “It’s almost like being a parent. When the kids do something well, you enjoy it almost more than your own personal accomplishments.”

He spoke about his motivation for learning and teaching martial arts.

“My mother was abused when I was a young child and it really scars people to witness that — so I always had the desire growing up to be able to protect myself and my loved ones,” Withrow said. “I want to give (students) the tools to protect themselves.”

Most Brazilian Jiu Jitsu takes place on the ground. Withrow explained why: Most fights end up on the ground, either by a person’s design, or by lack of balance, so to learn how to defend yourself on the ground is very crucial,” he said.

Brazilian Jiu Jitsu, according to Dave, differs from Japanese Jiu Jitsu, by focusing more on the functional aspect of self-defense moves, such as the rear naked choke and the arm bar, which can be used to stave off even much larger individuals than the one being attacked.

With that in mind, Aegis offers specialized classes for kids and women in addition to its open-to-all self-defense and adult jiu jitsu classes. The kids and women’s classes, Christine said, are scheduled side by side so mothers can come in for a lesson and their kids can learn at the same time.

Aegis has signed up 25 people for classes so far.