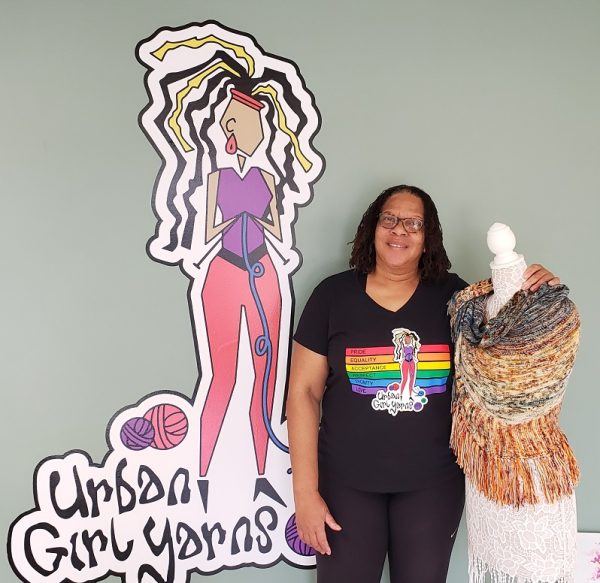 Shelia Anderson was being overtaken by yarn hanging from her doors and chairs, littering all her tables. She realized it was time to take her business out of her home in Jackson Ward.

Anderson recently decided to rent commercial space at 10962 Richardson Road in Ashland for her brand, Urban Girl Yarns, which dyes yarn in colorful, creative patterns, and resells it online and to specialty yarn shops.

Always a city dweller, hence the Urban Girl name, Anderson grew up in Chicago’s South Side, where her love of yarn started in the 1960s at age 7 in a park recreation center.

“I could hear people chattering and laughing, and being a nosey little kid I peeked through the window and these older ladies were playing with (yarn). I didn’t know it was called knitting back then. They saw me peeking and told me to come in,” Anderson said. “They showed me a basic stitch and I took to it, and they were all cheering for me.”

“They sent me home with a registration form for a knitting class, and that began the journey,” she said. “I think (my mom) paid like $15 for it. That was a lot of money back in the day.”

As she grew older, Anderson joined the Navy and gained her master’s degree in urban regional planning from VCU. But she always came back to knitting. After moving to Richmond for college, the owner of a now-former Richmond yarn shop, The Knitting Basket, suggested Anderson try dyeing her own yarn. 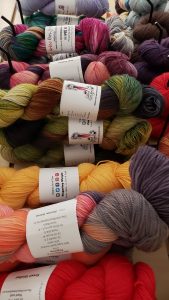 Anderson sells the yarns she dyes to other other eastern U.S. yarn stores as well as online.

With a lot of advice and research, she purchased some yarns and dyes. However, on her first attempt, she accidentally dropped the yarn, causing the colors to bleed together.

“It was the most beautiful color, and I became intrigued so I just kept going and kept going,” she said. That was nearly five years ago, and Anderson said she hasn’t stopped dyeing yarn since.

She sold her yarn at fiber festivals around the country and then online through Etsy. In March this year, she formally started her brand as a business.

Eventually, the yarn took up too much space in her home in Jackson Ward. Anderson started looking nearby to open a studio. She enlisted the help of broker Veronica Wiles with Sperity Real Estate Ventures and created a list of her studio requirements — first floor loading and unloading access, storage space, good ventilation, a deep sink and the right price.

“She said, ‘How about Ashland? It’s not too far,’” Anderson said. “Then she showed me this wonderful space.” 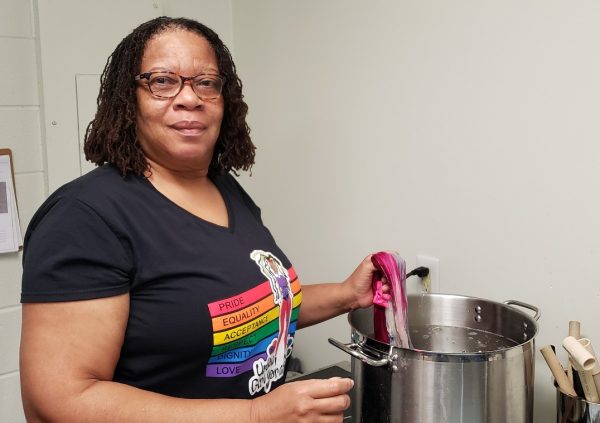 Anderson heating up some yarn to prepare to dye it with more colors.

Anderson got the keys for her new studio, in the 1,400-square-foot F suite of the 10962 Richardson Road building, July 1. After renovations by building owner A. D. Whittaker Construction, she dyed her first yarn there July 26.

She would not state the leasing costs, and said Whittaker covered the renovation costs as the last tenant, a cash register selling company, had been there 20 years and the building would have to be renovated anyway. She estimated she’s put in around $8,000 in equipment and materials.

“The investment is in materials to make sure that I have ample supply and availability of different types of yarns for people. A kitchen dyer does four to five skeins of yarn if somebody wants something special. I’m doing production, so that’s where I have to spend,” Anderson said. 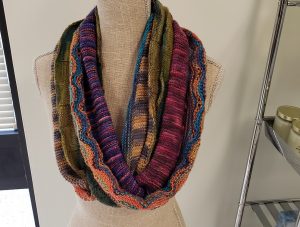 A display of of what a finished product knitted with one selection of Urban Girl Yarns looks like.

Anderson sells her yarn for $26 to $34 per skein depending on the material used, 90 percent of which she said comes from wholesale suppliers in Pennsylvania, Tennessee and Wyoming. The rest comes from specialty vendors with special fibers she can’t get in the U.S. In the last 18 months, her sales have grown from 100 skeins to between 500 and 800 a month.

Once everything is operating smoothly, Anderson said her next step is to partner with a local shop she sells to, Center of the Yarniverse in Ashland, and start teaching dyeing classes in the studio.

Just beautiful! Is your shop open to sell yarn or does one need to go to another retailer?