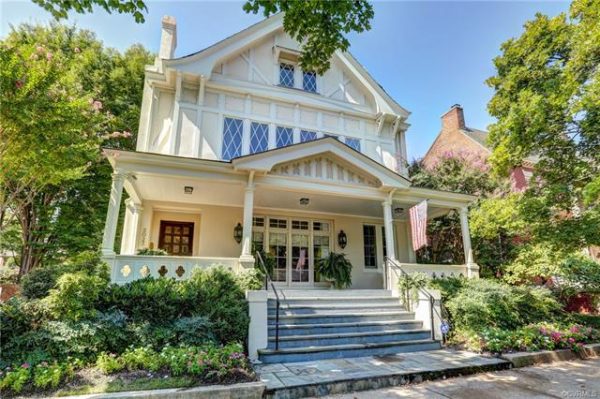 Two decades after it was spared from neglect, a restored Monument Avenue house is set to cash in on the fruits of its owners’ labors, hitting the market with an assessed value nearly 10 times its previous purchase price.

The century-old, Tudor Revival-style home at 2023 Monument Ave. was put up for sale last week with an asking price of $2.59 million. Anne Chewning with The Steele Group | Sotheby’s International Realty and Jill Davenport with Joyner Fine Properties are sharing the listing.

Totaling 7,800 square feet of finished floor space, the five-bedroom, 5½-bathroom house is owned by Mary and Thomas Horton, who purchased the then-deteriorated house in 1995 for $165,000, city property records show. 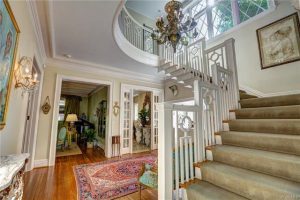 A staircase with balustrade highlights the main floor.

Nearly a quarter-century later, after an extensive renovation, the latest city assessment put the house’s value at $1.63 million.

“It’s a real gem,” said Chewning, who said the Hortons are moving to a smaller house in the West End. Thomas Horton is managing partner of Monument Restaurants LLC, a chain restaurant franchisee. Mary Horton’s involvements include serving on the advisory council for the Richmond Ballet.

Chewning said she and Davenport are both friends with the couple, hence their co-listing. She said the scenario is not uncommon, even with their affiliation with different brokerages.

“She’s friends of them and I’m friends of them, so they’re nicely using both of us, instead of picking one friend. It happens all the time,” Chewning said. She added that she and Davenport would split the commission on a sale. 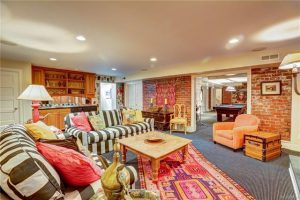 The full basement includes a billiards room and media room.

Built in 1908, the 2½-level house was designed by noted architect Claude Howell. According to a history prepared for the listing by Christopher Novelli, an architectural historian, the house is the earliest Tudor Revival built on Monument and one of the first Tudor-style houses ever built in Richmond.

The restoration, conducted in the mid-1990s, involved local architect Jay Hugo, now managing principal with Manchester-based 3north, as well as downtown architecture firm SMBW, according to Chewning and local write-ups on the project.

The upstairs includes a master suite with dual bathrooms, while the main floor is highlighted with a staircase with decorative railing. The full basement includes a wine cellar, rec room, kitchenette and bathroom. A two-car detached garage and patio areas round out the 0.19-acre property. 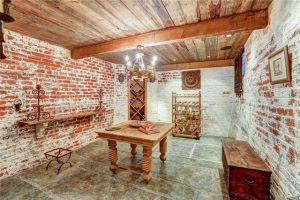 The wine cellar and tasting room.

Since listing the house last Thursday, Chewning said she and Davenport have received interest that resulted in multiple showings, but no offers yet.

“It’s going to take a while,” she said. “A lot of people are away. But we’ve had a great reception.”

The listing adds to an active season for Monument Avenue in recent months. In May, a 4,500-square-foot house at 1811 Monument Ave. sold for $1.25 million, marking a second consecutive month that the avenue claimed the top local home sale. The top sale in April, 2021 Monument Ave., topped the $2 million mark.

great house, but I wish they would paint it like a Tudor or craftsman, the cream thing doesn’t work

Well put. If they don’t like the (normally brown) timbers, they should cover them, and not use “Tudor.”