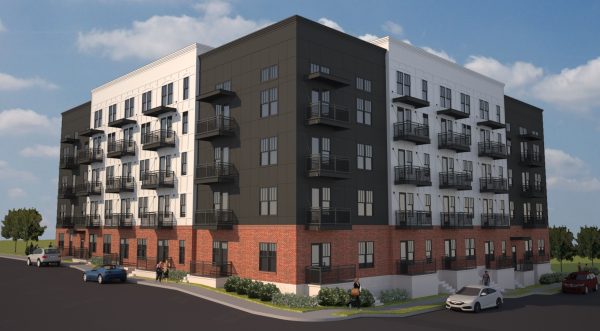 The Riviera at Semmes will be a collection of several buildings from the former Muse Buick dealership, including a five-story, 66-unit building at 1429 McDonough St. (Poole and Poole Architecture)

A group of seasoned developers is stepping on the accelerator in a reinvention of a former Southside car dealership property.

The Monument Cos.’ Chris Johnson and Tom Dickey, along with Howard Kellman of The Edison Co., have switched gears from their original plan to redevelop the former Muse Buick site property at 1414 Semmes Ave. in phases and is instead looking to complete the entire project in one fell swoop.

Dubbed the Riviera at Semmes – named for Buick’s luxury vehicle once sold at the Muse dealership – the $25 million project will bring 190 one-, two- and three-bedroom apartments to the 2.7-acre city block bounded by Semmes Avenue, West 13th, West 15th and McDonough streets. It’s expected to be completed by the end of 2020. 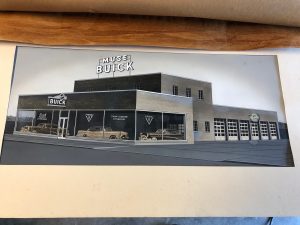 The Muse Buick dealership was one of several in the Manchester area. (Monument Cos.)

Johnson and Dickey said the group had plans to phase in the project, starting with the redevelopment of several historic structures on the site. But a hot streak in regional apartment leasing, and the promise of a new restaurant debuting on the site, prompted the group to move expeditiously on the entire project.

Kellman said the group is finalizing a lease with an undisclosed restaurant tenant to take over the one-story, 1,325-square-foot building at the corner of Semmes Avenue and West 14th Street.

“We do have an interested, experienced tenant who has shown great interest … in adding another restaurant,” Kellman said. “They own multiple, multiple restaurants.”

Johnson said the group has filed an amendment to its original application with the Virginia Department of Historic Resources to take the corner building from residential to commercial.

Remaining plans call for two new apartment buildings to rise on the site: A five-story, 66-unit, L-shaped structure near the corner of McDonough and West 15th streets at 1429 McDonough St., and a five-story, 83-unit building set to front West 14th Street at 400 W. 14th St. on the property. 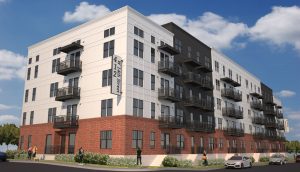 A second five-story, 83-unit apartment building is slated for the Riviera at Semmes development. (Poole and Poole Architecture)

Dickey said the Riviera at Semmes’ amenity package, which includes a pool, fitness center and leasing office, will be constructed into its future apartment building at 1429 McDonough St.

The group bought the Muse site last winter for $3.1 million. It sits at the Semmes and Cowardin Avenue intersection, which is having some of the most intense multifamily development in metro Richmond.

Across Semmes Avenue from the Riviera at Semmes redevelopment, Alabama-based LIV Development is building a seven-building, 289-unit community on 15 contiguous parcels totaling about 7.3 acres near the Lee Bridge at 1400 Railroad Ave.

Richmond-based Harper & Associates has cleared out several old warehouses at 1802 Semmes Ave. to ready the site for a mix of 106 townhomes and about 4 acres of commercial space.

Meanwhile, Ohio-based Brickhaus Partners is planning to construct its $40 million RiverHaus development that will bring 21 for-sale townhomes and up to 140 apartments to a 2.2-acre tract on the west side of Cowardin Avenue at the southern end of the Robert E. Lee Bridge.

With all this residential development on the intersection of Semmes & Cowardin, I don’t understand why there’s no plan in the works for a grocery store next to the Mini Price Storage. The community has been begging for a grocery store in this area for a while. Where are all the existing and future residents of this neighborhood (and surrounding neighborhoods) supposed to buy groceries? A grocery store right there could even attract customers from the other side of the bridge. It seems like a no-brainer!!

As a resident the closest grocery stores to me are in the bottom, the college campus or in Cary town. If I need a quick item it’s not really worthwhile to run out for one item. A grocery store in this area would be useful because then I can actually get food on my way home from work without risk of anything frozen thawning or other cold things warming up in the stop and go traffic of the area.

Please give us a grocery store.

And I’ll say it again. Not enough residents. To make it more clear about 7500-10,0000 people live in downtown area and they got a little Farm Fresh. Plus MCV and Church Hill are next to them. Manchester is pushing 5000 residents. And remember Food Lion, Publix, and Aldi (along with Target and Wal-Mart (are just 5 miles from you too) along Forest Hill. Your 3 miles from Farm Fresh and Kroger. Both distances but you in those stores service areas. I think once you all get over 10,000 maybe Trader’s Joes, Lidl or Aldi might move in but they will… Read more »

Michael, can I ask where you are getting your information about population? I’m just curious.

So, in the meantime, “let them eat cake?”

Does your 5,000 estimate include Blackwell, Oak Grove, Old Town Manchester, Maury, Swansboro, etc? Between all of these neighborhoods, we barely even have a decent gas station, let alone grocery store. The term “food desert” hardly hits the surface of what’s going on south of the river. We need something store-wise!

Carmen Vasquez It’s frustrating to have to drive five miles for half and half, or garlic. I feel like church hill and other areas of the fan have versatile options with numerous smaller markets that carry common essentials. Maybe I’m wrong, it’s been a long time since I lived over there. But I don’t ever remember half and half being a hassle before living in this neighborhood. A few options have opened recently, like Camden Dogtown and Outpost, but they don’t carry cream and have very limited (but quality) produce options. I have been longing for a closer grocery store… Read more »