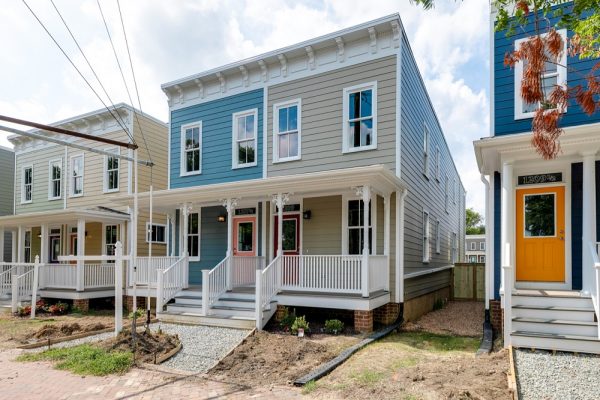 Project:Homes held an open house Thursday for the cluster of homes it completed this week in the 1200 block of West Leigh Street.

Called Solar Row, the project is a collaboration between Project:Homes, the City of Richmond’s Economic and Community Development department and Richmond Redevelopment and Housing Authority, with donations from the Community Foundation for a greater Richmond and Wells Fargo. 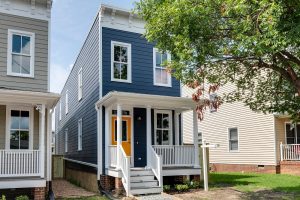 The row of seven homes includes one detached unit.

Project:Homes is a nonprofit that provides housing to those making below the area median income level. Its newest units on Leigh Street will be sold to families making 80 percent or less of the median income — about $46,000 for an individual in Richmond — for $185,000 each. The cost of the entire project was just over $1 million, said Madeline Petrie, Project:Homes grants and marketing coordinator.

RRHA previously acquired the land and partnered with Project:Homes to develop it, and the City of Richmond provided grants and funding for construction.

The seven homes consist of three pairs of attached units that share a wall, and one detached unit. Two more detached units, facing Catherine Street behind the Leigh Street homes, are also planned and are estimated to be finished by the end of 2019, which would mark the completion of the 20-year-long Richmond’s Neighborhoods in Bloom program for the Carver district. 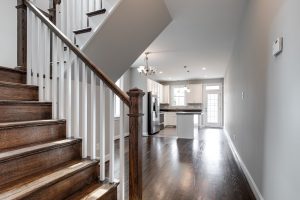 Each floor plan is based on a 13-foot width to fit as many houses on the lots as possible.

Each unit follows a similar floor plan with a 13-foot width, to fit as many houses as possible on the same lots while still providing space on the block for backyards and off-street parking. They come out to around 1,200 square feet each, with two bedrooms and 2½ baths. The half bath is on the first floor and each bedroom on the upper floor has its own bathroom.

Architect David Winn designed the houses off an initial design idea from Project:Homes.

Setting these units apart from most of Project:Homes’ other projects is the inclusion of rooftop solar panels that will save the low-income residents money by offsetting their electric bill each month. The solar panel additions were made possible by a $75,000 grant from Wells Fargo through its Priority Markets Program, and with $26,000 through the Community Foundation’s donor-advised funds.

“Basically, these houses are designed to generate as much electricity as they consume,” he said. 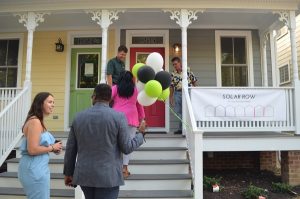 An open house for the homes was held Thursday.

“You get up in the morning and start turning lots of stuff on and using a bunch of electricity, and then you leave and go to work and turn everything off. So, all day, the solar panels are soaking up sun, and the meter runs backwards because the house isn’t using a lot of electricity,” he said. “You get home in the evening, start turning stuff back on, the sun goes down and the house starts to consume electricity, so the meter runs forward. The idea is at the end of the day, it has run backward as much as it has run forward.”

Along with air sealing each house and using blown fiberglass insulation along each wall, the rooftops are covered in a white PVC membrane that reflects heat from the sun away from areas not covered by solar panels. The houses come equipped with all-electric Energy Star appliances.

Cake said it may not eliminate all electric costs – for example, on dark, cloudy days – but on bright, sunny days, more electricity than is used can be generated and put back into the grid, earning energy credits for times when it’s dark. Integrated Power Sources of Virginia installed the solar panels.

The open house showed off the units and celebrated the completion of the Carver district’s Neighborhoods in Bloom program. Hometown Realty Group GeorgeRVA will sell the homes.

Taxpayers should not be subsidizing the future owner of a $185,000 home –or any home, for that matter. Of course, if Wells Fargo wants to engage in virtue signaling, that’s up to them.

@Jonathan – I have always opposed the mortgage interest deduction, as it is beneficial to the group which least needs it. Likewise, I am against such regressive taxation as taxes on groceries. But you are merely deflecting. All you really needed to say was, “I am in favor of government subsidizing those with lower than average incomes.” See — was that so hard? And now you sound magnanimous! (Well, magnanimous with other people’s money, which is so easy for our elected officials to be nowadays.)

It’s a shame that none of the units are designed for Seniors, with a first floor bedroom, and the elimination of stairs from the street.

Why are we still replicating these 1910 low-quality rowhouses?

They look like nice homes, and I’m glad to see the continued transformation of Carver. Kudos to Project:Homes and RHHA. And kudos to Wells Fargo for the solar contributions. What a blessing for those home owners to have an affordable home that is affordable to maintain.