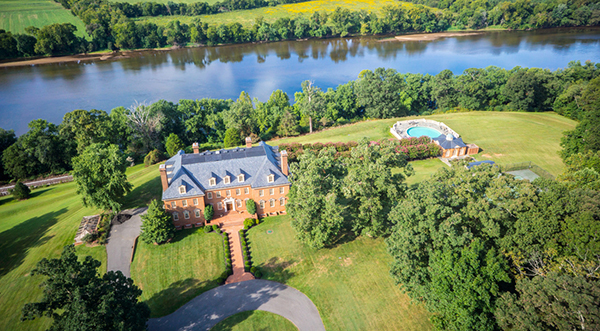 A Goochland County mansion is a step closer to becoming the region’s newest event venue.

The new use is driven by two married couples who are under contract to purchase the 60-acre riverside estate: Doug and Tamra Adams, who host weddings at their Goochland-based Adams International School, and Andrew and Kim Moody, who own wedding-planning company Kim Moody Design and would reside at the venue, to be called “The Estate at River Run.” 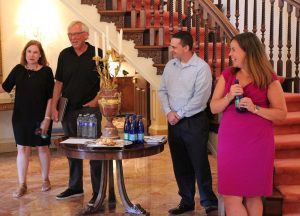 Tamra and Doug Adams are collaborating on the plan with Andrew and Kim Moody, pictured from left. (Photos by Jonathan Spiers)

While the permit clears a regulatory hurdle, another matter remains to be resolved before the new use could go forward, relating to a recently discovered covenant on the deed that restricts a home-based business from operating out of the house.

Kim Moody said the property was believed to have been released from the restriction when the Masseys built the house in the 1980s, but the covenant showed up on a title search and was brought to their attention by a neighboring property owner.

A meeting with neighbors who have a say over the covenant was held last week, and Moody said they’re waiting to hear if the neighbors sign off on a change to the document.

“It’s between them and the current owners, so we just have to wait,” Moody said. “The attorneys are doing the title work, and we hope to close later this month.”

Of the permit approval, Moody added: “They genuinely listened to the concerns of the constituents, and we’ve made concessions to try and be good neighbors and make everybody comfortable. I’m from a rural area as well and would have the same concerns as our neighbors do, so we’re empathetic to that and we want to be great neighbors to them.” 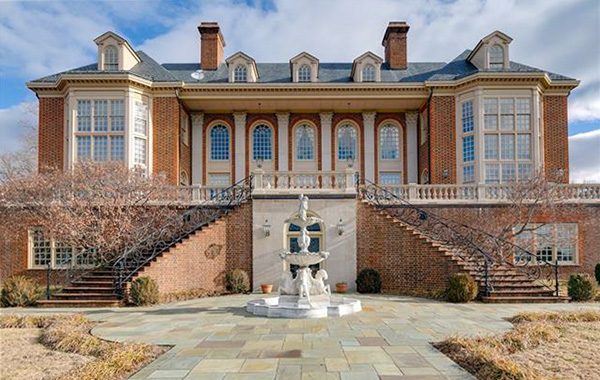 The back of the house facing the river. (CVRMLS)

The permit approval comes with several conditions that were hammered out since the hearing, in which the board heard from 20 speakers who were evenly split in support or opposition of the plan. Among the concerns that opponents voiced in the hearing were the number of events allowable per year, event hours and noise impacts.

The conditions limit the number of events that can be held at the venue to 40 per year, with no more than 299 guests allowed per event. Up to two related accessory events of no more than 85 guests are allowed if the larger event is booked over three consecutive days.

The conditions also call for a minimum of 75 parking spaces and an overflow lot to be designated on a development plan. Fireworks are prohibited. An event booking schedule must be supplied to the county annually, and a traffic impact analysis is required after a year. The permit is good for a period of five years and would need to be renewed.

The number of events allowable per year falls in line with the roughly three dozen wedding events that the group has said it expects to book. At a community meeting with neighboring property owners and county residents in June, Kim Moody said they also would like to host charity events and corporate functions in the off-season. Short-term rentals separate from events also are planned.

The group also is in talks with Philip Carter Winery of Fauquier County to open a tasting room and, eventually, a vineyard on part of the property. The tasting room would be located in the lower level of the house, with a setup in the property’s pool house as well. 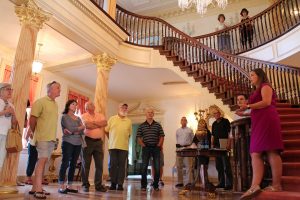 A community meeting was held at the mansion in June.

The permit approved this week does not address the winery use, which is allowed by-right and would be regulated by county ordinances already on the books. Winery CEO Philip Carter Strother has said he would likely open the tasting room daily from 11 a.m. to 6 p.m. Sundays through Thursdays and to 10 or 11 p.m. Fridays and Saturdays.

It’s unclear when either use would get going on the property, and a development plan is required before site preparations could get underway. Pending a decision on the covenant, Moody said they would like to start hosting events by December, with weddings and the winery starting in the spring.

“I think we came to a determination that works for pretty much everybody that’s involved,” Moody said of the conditions. “There’s still a couple of concerns, but obviously at a neighborly level we hope to be able to handle those.”

Five years on the market

The Moodys and the Adamses put an offer on the property in June though an LLC named after the manor. County property records did not reflect a sale as of Wednesday.

The hillside estate overlooking the James River most recently was priced at $3 million. The latest county assessment valued the property at $5.28 million. 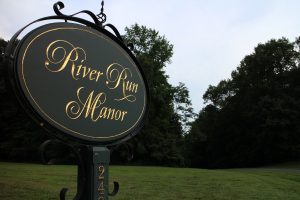 Signage at the entrance to the property along River Road in Maidens.

The property for years was the priciest residential listing in the Richmond market. It originally hit the market in 2014 with a price tag of $7.9 million and, despite several price reductions through the years, remained the highest-priced listing until 2018, when The Steele Group | Sotheby’s International Realty took over the listing.

Totaling eight bedrooms and 11½ bathrooms, the Georgian Revival-style home was built in the 1980s by the late William B. Massey, a longtime coal executive whose grandfather founded A.T. Massey Coal Co., more recently known as Massey Energy. William B. Massey died in 2014, and the property is now owned by his four children.

What happens when they hear gunshots from people hunting on the other side of the river in Powhatan?

Same thing that happens when anyone hears gun shots out in the rural parts of the counties. Nothing.

What exactly are you getting at?

I own a wedding venue in King William. There are gun shots all the time. No one bats an eye. If you want to go to the country, then the country is what you get.

Yes, this may seem like it’s in the middle of nowhere to some folks–and who cares about whether or not this matters to anyone? But there are people nearby who live and carry on their lives just like everyone else in less natural settings. We can wave to the Massey property from our property across the river in Powhatan. The local residents–both in Goochland and Powhatan–have every right to be concerned about the permit. This house was constructed as a private residence. The number of events allowed (so far) per year at 40 along with the number of guests at… Read more »

What on earth are you talking about? Yes, there will probably be a slight impact, but Matt and I didn’t mention anything about these impacts. We were only referring to the gun shots you mentioned, which already go on all over the place no matter what happens with River Run. I don’t really see how this winery would be any different than Licking Hole Creek or Courthouse Creek Cider that already operate just down the road. They aren’t opening Kings Dominion. I don’t think it will be that noticeable. How many people can Tanglewood Ordinary seat? Want to shut them… Read more »

If the amplified sound is that loud, the gunfire will be happening 700 feet from the Wedding Ceremony! I promise!

Did you really just use your real name and make a threat about shooting your gun? It is threats like this that give responsible gun owners a bad name. I guess the police will know where to start when anything goes wrong around there.

David, I agree with you on your comment regarding appropriately worded comments. Let me clarify my initial question at the start of this thread . If there’s a quiet event outside and people hear gunfire from across the river, how will they react? Will they really accept it as just another hunting day in the field? or will they panic? Then, willl they insist that Powhatan shut down all hunting activity on that side of the river? This hunting noise, that I mention, has probably stayed steady for years. However, many people who attend the functions at the Manor may… Read more »

Quite honestly I think you are overreacting a bit regarding your thoughts about them overreacting to gunfire (unless you are hunting with automatic weapons). For one thing, if it is in Powhatan then that is under different jurisdiction than the facility. Powhatan would have to restrict your ability to lawfully hunt in some fashion, which realistically they are not going to do for many reasons. One simply being that it would likely cause such a firestorm nationally that they would never hold office again. My advice to you if you are worried about them “growing” the business is to document… Read more »

We live 700 feet away. We will hear everything that happens outside , just like we did when the Massey’s held events and fund raisers for the symphony, the opera, and numerous local charities. The only differences are there will be more of them and that they will be hosting events for their profit.