Note: See correction at the bottom of the story.

A group of out-of-state developers with a focus on commercial and mixed-use projects is planning what it calls “Chesterfield’s new downtown” in the heart of the suburban county.

Documents submitted to the county show a mixed-use development with a hotel, 400,000 square feet of retail and office space, and hundreds of new homes planned for 122 acres southeast of the Route 288-Iron Bridge Road interchange, on undeveloped land between the interstate and Courthouse Road east of Iron Bridge.

Courthouse Landing will include 400,000 square feet of retail and office space. (Cuhaci & Peterson)

Called Courthouse Landing, the development would consist of 350,000 square feet of retail space, a 65,000-square-foot medical office building, 65,000 square feet of additional office space, a 150-room hotel, and up to 650 multifamily homes – half of those apartments, and the rest townhomes and condos.

The project is a joint venture between Dunphy Properties, a Florida-based firm primarily active in that state, and Atlanta-based Shuler Properties, whose retail developments in Virginia have included the Bed Bath & Beyond-anchored Towne Crossing shopping center at Courthouse Road and Midlothian Turnpike.

The firms are working on Courthouse Landing with Atlanta-based investment group Batson-Cook Development Co. and NAI Dominion, a commercial real estate brokerage based in Hampton Roads and Richmond.

Some of the planned retail units. (Cuhaci & Peterson)

A marketing flyer posted with a project overview on Dunphy’s website describes the development as Chesterfield’s “new downtown” and “downtown destination.” Plans filed with the county describe the mix of uses as “providing residents and customers a sense of Urban Living in a Suburban setting.”

The group is seeking a rezoning with conditional uses through an entity called 29:11 Chesterfield LLC, which lists Dunphy’s Florida address as its principal office. The case was set to go before the county Planning Commission at its Oct. 15 meeting, but it’s being deferred to Nov. 11, said Andrew Condlin, a local attorney representing the group in its application.

Condlin, a partner with Roth Jackson Gibbons Condlin, said the group requested the deferral to meet with area residents who are interested in the case but were not able to attend or weren’t notified of a community meeting held two weeks ago.

Reached Friday, Dunphy principal Jim Dunphy declined to comment on the project beyond written statements provided by Condlin. Condlin said the project is designed around the surrounding road network, existing wetlands and a sizable gas line that runs through the property.

A rendering of an office building. (Submitted)

“These features dictated in large part the design of the project,” Condlin said.

“We are proposing a mixed-use project with a focus on common gathering spaces, public spaces and pedestrian connections,” he said, adding that design guidelines submitted with the case detail “the integration of the commercial areas and residential sections by use of connecting streets, common spaces, open areas, public spaces and walkways…”

The group is under contract to purchase the land, which is mostly vacant except for a closed gas station along Iron Bridge Road that would be replaced. The eastern portion of the site wraps around part of Gates Elementary School.

Located just north of the Chesterfield County courthouse and government complex, the site consists of three parcels, two of which are owned by the county. The parcel closest to the interstate is owned by an entity called WSWL Properties LLC.

The latest county assessment valued the LLC-owned parcel, totaling nearly 65 acres, at $2.33 million. The other parcels are included in multi-parcel assessments involving county-owned land not involved with the site.

The site would be accessed by three entrances off Courthouse Road and a right-in-only entrance off Iron Bridge Road. Plans show office and retail uses would be located closer to Iron Bridge, while residential buildings would be centrally positioned. Open space with walking trails and recreational uses would wind through the property and around two stormwater retention ponds.

Renderings show a proposed self-storage building, a gas station and various multi-story office buildings. Three-story townhomes would include front-loaded garages, and “two-over-two”-style condos stacked in four-story buildings would have rear-loaded garages. The plans do not mention price ranges for the for-sale homes or monthly rents for the apartments. 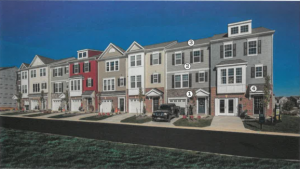 The townhomes include front-loaded garages. (Submitted)

Community amenities would include a central pavilion area called The Landing and at least five of a variety of options listed in the plans, including a multipurpose lawn, fitness stations, a wetlands footbridge, birdwatching areas and dog stations.

The apartments would include a 5,000-square-foot clubhouse with fitness center and at least four of other amenities such as a pool, fire pits, outdoor grills, and bike racks and storage. The townhomes and condos could have a playground, dog park, pond overlook and community gardens, while amenities in the commercial area could include walking trails, plazas and picnic shelters.

The plans do not specify an overall cost for the project. 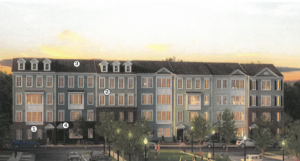 The group is working on the project with Cuhaci & Peterson, an Orlando-based architecture, engineering and planning firm. Richmond-based CiteDesign is handling landscape architecture and conceptual planning, while Midlothian-based Townes Site Engineering is handing civil and environmental engineering. Green Light Solutions of Mechanicsville is the traffic engineer.

Courthouse Landing is the second large-scale mixed-use development proposed in Chesterfield in recent weeks. Last month, Swift Creek Station – a 230-acre development proposed for nearly 800 homes south of Brandermill – went before the Planning Commission and was recommended for approval. That project now goes to county supervisors for a final vote.

Correction: The overall assessed value for the project site could not be determined because the two county-owned parcels are included in multi-parcel assessments involving other county land. An earlier version of this story incorrectly attributed those multi-parcel assessments as the value for the two individual parcels that make up part of the site.

Nothing says “Downtown” like out parcels and parking fields in front of buildings.

The tax assessed value of $52M looks way too high and does not represent the acreage they are buying per the conceptual site plan. The assessment used in that figure for one of the county parcels also pulls in more land and buildings in the complex that I’m sure they are not buying. The value per acre of the non-county piece is more in line with what the value might be. Makes it sound like they might pay $52M for this land which I’m sure they are not paying anywhere close to it.

We need more traffic on route 10 like we need a hole in the head. Please leave some areas alone. I have come to hate living in this area, if i wanted to live in a city i wouldn’t have left New York.

So you moved here from New York, but no one else should be able to? Also, people moving from New York with possibly more disposable income haven’t increased the market for retail?

Lisa,
Please do not explain your frustration on here. The majority of the people commenting are investors and builders that more than likely don’t even live around the areas that are being effected. They could give a rat’s ass about green space, wildlife, and the devastating impacts of suburban sprawl. They’ll care when the land runs out!

I’ve lived in the county for 63 years and paid taxes here my entire adult life. I’m neither an investor nor a developer.I love people who want to suggest what others’ do with their land. It is retirement for some landowners. Should they throw away the land that they invested in? If someone wants to preserve others’ land they are more than welcome to purchase said land and donate it as they wish. Is there any other personal property of others that one should control in order to suit there own wishes? People should talk to their representatives or run… Read more »

Not a Downtown…nor is this a Mixed Use community. The uses are grouped, just as have been done throughout the history of zoning. Mixed use implies a stacked uses and pedestrian orientated. Let’s just throw in every kitsch word in development to make it sound cool. So Bad.

If they threw in “cloud based” and “Block Chain” I could have filled in my buzz word bingo card.

Brett, wouldn’t a mixed us “development” just suggest that commercial, office, retail and residential is all within the “development” as opposed to a single use of any of those alternatives. I agree that the uses may not be a new concept, but the single developer is relatively new compared to 10 years ago. At least the potential residents will have a better idea of what else is proposed for the immediate vicinity, which would help those affected like others in this comment section.

Mixed-Use used to mean vertically mixed uses, such as apartments/condos over commercial. Or at least having the uses more integrated with each other such as Libbie Mill or West Broad Village where uses change block by block. This proposal is essentially a strip mall with separate townhouse and apartment developments nearby. Just because you have multiple uses on a zoning application doesn’t really mean it is “mixed-use”. Otherwise all larger developments, Wyndham, Twin Hickory, Brandermill, etc., would be considered mixed-use and then the description is overused and really does become meaningless.

David, I was just distinguishing between the terms “development” and “Community”, but your examples are accurate. I do agree with your conclusion.

I think it makes sense to develop this particular spot, but this is some of the most uninspired suburban nothing I have seen lately.

So…they’re building a strip mall with town houses and apartments next to it. Does that make the entirety of Broad Street and the 2-3 streets behind them “mixed use” as well?

Calling this a “downtown” style project is like putting out small bowls of boiled chicken, potatoes, onions, tomatoes and butter beans and calling it Brunswick stew.