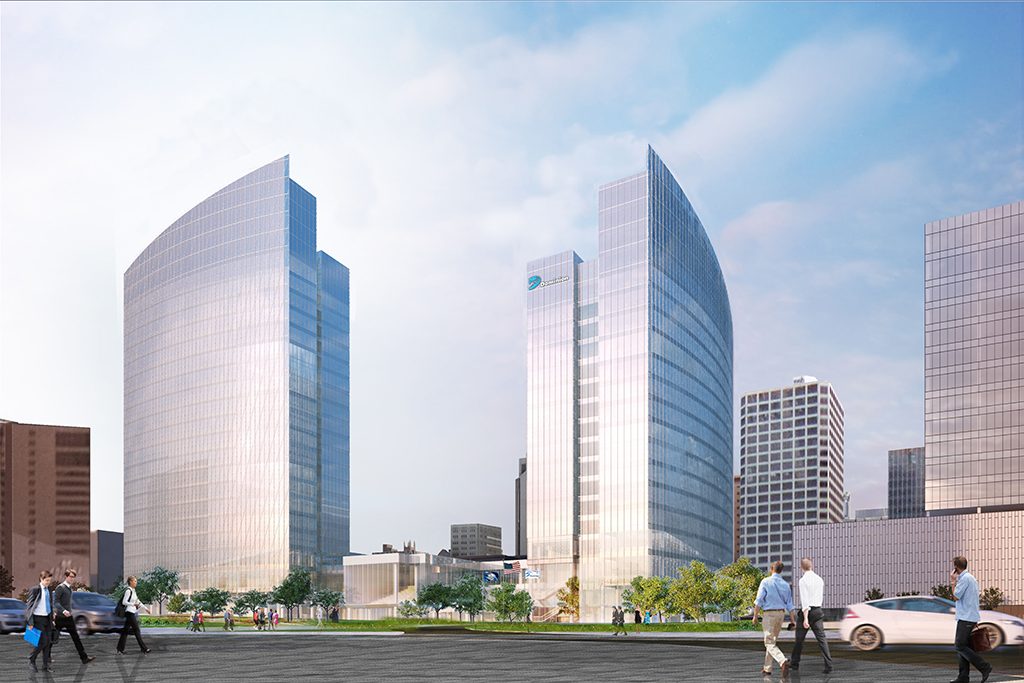 A rendering of the two towers, showing the now-completed 600 Canal Place to the left and the potential second tower to the right. (BizSense file photo)

With its shiny new office tower up and running downtown, Richmond’s resident utility giant Dominion Energy is moving forward with plans to demolish a neighboring building while it mulls construction of a potential replacement.

Employees have been vacated and fencing has gone up around One James River Plaza, the company’s 21-story building at 701 E. Cary St.

The 1970s-era building will be toppled via implosion, a process expected to occur in the first quarter of 2020.

Razing the One James complex is made possible by the completion of 600 Canal Place, the company’s glassy 20-story, 1-million-square-foot tower at 600 E. Canal St.

It was completed earlier this year and is now occupied by more than 1,000 Dominion employees, including employees that had worked in One James.

Dominion previously announced it was considering building a second tower on the site of One James complex or renovating the existing building. The company still isn’t ready to say a new tower is imminent, even with demolition prep underway. 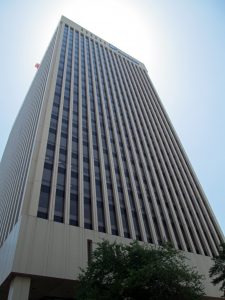 “After carefully assessing our options regarding One James River Plaza at 701 E. Cary Street, we have decided to demolish the building,” the company said in a prepared statement Friday. “The company is evaluating our future downtown workplace needs and developing plans for the property that could include a new office tower. A final decision regarding those plans will be made in the coming months.”

It already has filed plans with the city for the second tower, dubbed 700 Canal Place. It would rise 17 stories and hold more than 900,000 square feet. Its design would mirror that of 600 Canal, albeit slightly shorter. The two towers would be connected via a sky bridge over South 7th Street.

Plans show Richmond-based Hourigan and Chicago-based Clayco – the two companies that built 600 Canal – as the general contractors for the second tower. Houston-based architecture firm Kendall/Heaton Associates has been selected as the architect of record, and the Timmons Group is the civil engineer, plans show.

Dominion spokesman Ryan Frazier said the company is in discussions with potential contractors to carry out the implosion.

In addition to vacating the building and erecting the fencing, prep work for demolition involves cutting off all utilities, removing all equipment and furniture, and a physical inspection of the structure to see how best to bring it down.

Dominion Energy donated the unneeded furniture and office supplies to local schools, the Richmond Public Library, and charities and nonprofits.

The process of demolition and subsequent cleanup would take about a year. Should the company then decide to build anew onsite, Frazier said that new tower would be expected to be completed by the end of 2023.

He said it’s too early in the process to discuss cost estimates. 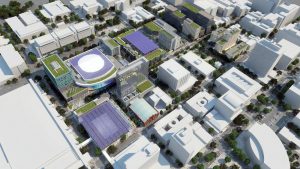 An aerial rendering of the proposed new arena and surrounding buildings. (Courtesy navyhillrva.com)

The company’s weighing of options comes as negotiations continue between the city and a group led by Dominion CEO Tom Farrell over the so-called Navy Hill project, a massive development anchored around a new arena that would replace the Richmond Coliseum.

One point of contention in the negotiations is the size of a proposed tax-increment financing district, which the developers and the mayor say is needed to help fund the $1.5 billion project.

The boundaries of the TIF district were initially proposed to span the 10-block area around the Coliseum. The proposed scope has since been enlarged to span much of downtown and would include Dominion’s 600 and 700 Canal sites.

The TIF would draw real estate tax revenue solely from new development and increased assessments within its boundaries to help pay off the bonds for the arena. Critics of the project are skeptical about the inclusion of Dominion’s properties, in part due to Farrell’s involvement.

Frazier said the Navy Hill negotiations and timing of Dominion’s decision on the second new tower are not related.

“Our decision on whether or not to move forward with the new tower will be made on our future work place needs in downtown Richmond,” Frazier said. “Whether we go or not has nothing to do with Navy Hill.”

The ultimate scope of and boundaries of the TIF are “up to the city to decide,” he said.

Why does VEPCO need another monolithic eyesore?

Are you implying the current building is a piece of architecturally brilliant design? It’s hideous. A vacant lot would be an improvement.

It’s a 50 year old building that won international recognition for landscape architecture in an urban setting. It was also a solid example of Functionalist architect, born in the 1950s. So for the late 1970s, yes, it was a celebrated design.

Given that you still refer to them by the state utility and not the diverse national energy company that they are, I assume you would prefer a rustic cabin over either tower?

The construction of the 2nd tower will be an improvement whose tax value would count toward the available revenue to pay of the bond…..no they have nothing to do with each other. Cause if the deal collapses, why would you want the city taxpayers to benefit from the new building’s tax revenue since it would NOT be paying for your pet project but will be general fund revenue for schools and roads. This is part of mafia like business deal. You want the new tower, fine approve Navy Hill. No Navy Hill you have a vacant lot in the heart… Read more »

It’s just a matter of waiting for their announcement, because Dominion knows what they’re doing, per their master plan. Their plan involves selling two larger holdings in the city: Their properties along Grayland Ave near The Fan/Robinson St. and their 8th and Main building. In order for that to work they need more office space downtown. The question is how much space do they need and let’s just hope the Scana purchase doesn’t mean we end up with a smaller building here.