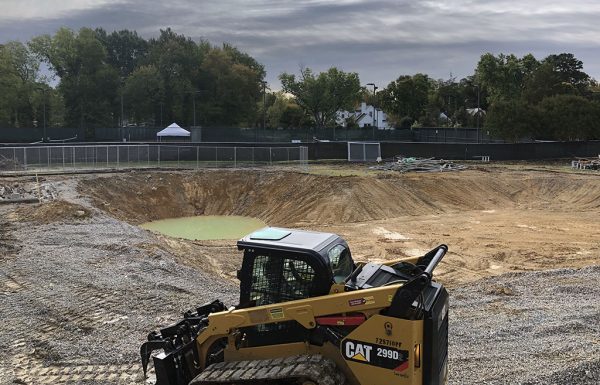 A pit is all that’s left of Westwood’s decades-old pool after crews began demolition ahead of construction.

Bulldozers are humming amid the pop of tennis balls at a West End country club as it begins the second phase of a planned three-part renovation to its grounds.

The Westwood Club at 6200 W. Club Lane recently dug in on $3 million worth of construction to transform much of its outdoor spaces, highlighted by tearing out and replacing its 54-year-old pool.

Beth Lane, longtime Westwood member and president of the club’s board of directors, said the work began last month and will include construction of two new pools, including one with eight lap lanes and a family pool with a “beach” entry.

Also on the drawing board is the installation of a sports court for basketball, pickleball and wall ball, as well as renovations and enlargement to the club’s outdoor bar area to make it usable in some of the colder months.

Lane said this is part two of a three-phase project the tennis-centric club has dubbed “Westwood 2020.” Members approved the plan several years ago and agreed to fund it with a combination of member assessments and a loan from Chesapeake Bank. 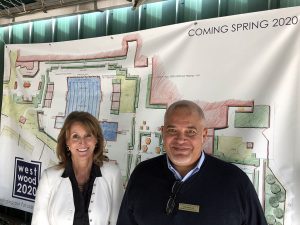 Westwood Club board president Beth Lane and General Manager Dan Moscar showing off the layout of the club’s renovation plans.

Phase one was done in 2016-2017, and involved a mix of indoor and outdoor improvements, including converting an area above the squash courts as a viewing area, installing more outdoor lighting and more than doubling the club’s child care area.

Phase two is expected to be ready for next summer’s pool season. RVA Construction is the general contractor. Siska-Aurand Landscape Architects designed the new outdoor layout.

Lane said the upgrades are aimed at retaining its existing 1,000 members and attracting new ones, in an age when country clubs are evolving with the times.

“The club has been around since the 1920s,” Lane said. “There have been a lot of changes over the years.”

What is now known as the Westwood Club began as a public golf club in 1927. It transitioned into the Westwood Supper Club in the late 1930s, evolving once again in the thick of World War II. It also at one point housed a large skating rink.

After shedding golf and focusing on tennis, it became the Westwood Racquet Club until 1994, before taking its current name. In 1970 the club hosted a tennis tournament won by a young Billie Jean King. It was called the Virginia Slims Invitational, back when cigarette brands could put their names on such things.

Now with 21 courts, Westwood hosts the Thalhimer Challenge, a tennis tournament that pits the best players from area country clubs.

While tennis has been its hallmark, Lane said the pool area was ready for a face-lift.

“The tennis facility is outstanding, bar none,” Lane said. “But our pool that we have – or had up until two weeks ago – was constructed in the 1960s.” 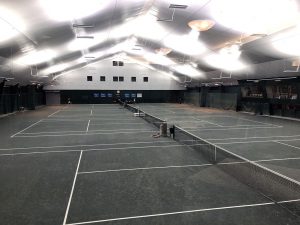 One of the club’s indoor tennis areas.

Phase three, which Lane said is expected to begin in two or three years, will continue to shed some of the club’s older features, with a focus on indoor renovations, particularly an older entryway off West Club Lane.

“There’s a very old Richmond feel in the front part of the club before you transition into the newer addition,” Lane said.

The club hasn’t set a budget for that final phase.

A goal with all three phases, and particularly with phase two, is to continue attracting younger families interested in the pool amenities who may eventually convert to full tennis members, which is the club’s highest tier.

Dan Moscar, the club’s general manager and COO, said full membership including tennis is $320 per month. Lower-tiered social memberships are $100 per month. Those tiers also require a food and beverage minimum. The club does not offer summer-only memberships.

Moscar, who came to Westwood about 18 months ago after a stint at the Dominion Club in western Henrico, said the club at its peak season employs upwards of 160 workers.

Id love to know more about this

I read pickleball court – will there be more than one and are any dedicated courts? Pickleball has exploded across Richmond, 38 new dedicated public courts have been added in the past few years (18 in Chesterfield, 12 in Henrico including the four about to open in November, and 8 in Richmond). I’ve seen where country clubs are slowly adopting pickleball as well, along with privately owned neighborhood rec centers. Would love to know where Westwood sees pickleball in their long range plans. Best of luck to them moving forward.