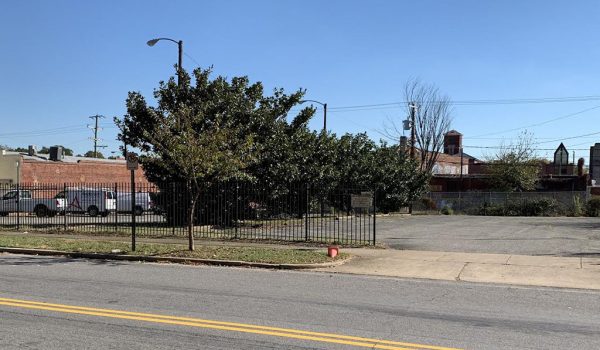 An overflow parking surface parking lot for the Manchester Medical center at 1510 will soon be redeveloped into two-story apartment building. (J. Elias O’Neal)

Ben Adamson is at it again in Manchester.

The developer, whose firm Corinthian Construction is known for infill apartment and mixed-use projects in the Southside neighborhood, is set to launch construction by year-end on a $3 million, two-story, 23-unit apartment building at 1510 Bainbridge St.

Plans call for the structure to wholly front Bainbridge Street and include a mix of 18 one-bedroom and five two-bedroom units, Adamson said. A 28-space parking lot for future residents will be placed behind the apartment building.

Adamson purchased the half-acre lot in July 2018 for $265,000, according to city property records. The property currently serves as overflow parking for the Manchester Medical Center at 101 Cowardin Ave. The seller of the land was Manchester Medical Real Estate, which is tied to a physician at the medical center.

A front view of a new 23-unit apartment building set to rise at 1510 Bainbridge St. in Manchester. (ADO)

Corinthian Construction is building the project, which should be complete by late August or early September 2020. Richmond-based Architecture Design Office handled the design work. Adamson has yet to hire a property management firm to oversee leasing.

The Bainbridge infill project adds to a growing tally of developments launched by Adamson in one of the region’s fastest-growing multifamily submarkets.

Work continues on Manchester Park, a multiphased cluster of apartments, duplexes and townhomes bounded by Perry, McDonough, West 12th and West 13th streets, which Adamson and Charles Macfarlane launched about two years ago.

Crews are plugging away at Manchester Park’s four-story, 33-unit apartment building with a 4,000-square-foot corner commercial space at 1200 McDonough St. A final phase of the development would include another apartment or mixed-use development on a 0.3-acre lot the partners own at the corner of West 12th and Perry streets.

About a year ago, Adamson and Macfarlane sold a 24-unit mixed-use section of the Manchester Park development at 1300 McDonough St. for $5.5 million. 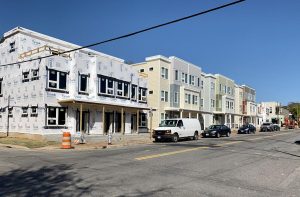 Manchester Green’s growth is turning a corner, with new townhomes completed and under construction on Bainbridge Street. (J. Elias O’Neal)

Several other noticeable infill projects are underway or nearing completion along the corridor south of Commerce Street.

Construction on Chesterfield-based RJ Smith Cos.’ River Row at 1406 Bainbridge St. is complete, said Janet King, who runs the firm with Richard Smith.

The $1.5 million, three-story development includes six two-bedroom units and three one-bedroom apartments. While the units won’t be available to tenants until Nov. 15, King said about four of the nine units have been preleased.

Chester-based CMF Properties, which owns several multifamily units throughout the neighboring Maury and Swansboro neighborhoods, is converting a 103-year-old building at 1424 and 1426 Bainbridge St. into eight apartments, a company representative confirmed Thursday.

CMF purchased the former nursing home in April 2018 at a delinquent tax sale for $308,000, according to city property records.

It hopes to complete the renovations by February 2020, with plans to rent each of the units at market rate.

They launched construction on the project about a year ago on a 2-acre block bounded by Bainbridge, Porter, 12th and 13th streets, helping transform the vacant block into one of Manchester’s largest for-sale residential enclaves.

Manchester is booming! Its unique in that it has both for-sale and rental townhouses as well as large and small new apartment communities. It also has one feature lacking anywhere else in the City: riverfront views of downtown. Hopefully soon a grocer will discover that theres a market awaiting for a new store.