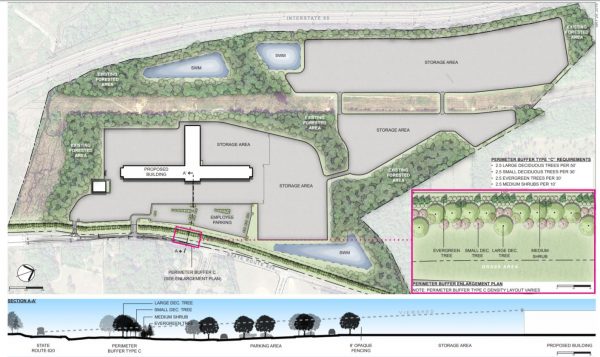 Carvana secures approval for Chester facility
Chesterfield supervisors voted 4-1 last week to approve Carvana’s proposed distribution facility near Chester after deferring a decision following a public hearing last month. During that hearing, neighboring property owners expressed concerns about noise impacts and a related proffer that they had not had time to review.

No hearing was held prior to Wednesday’s vote, in which supervisor Jim Holland was the lone dissenter.

Carvana plans a 200,000-square-foot vehicle inspection and processing center on a 183-acre site at 13504-15100 Woods Edge Road, along the east side of Interstate 95 just north of Ruffin Mill Road. The $40 million project, referred to as Project Utopia by county officials because it involves competitive state incentives, would include multiple surface parking areas able to hold 9,000 vehicles.

The center, which would not include one of Carvana’s car vending machine towers, is one of three that Carvana is aiming to open next year.

Hourigan hired to complete Goochland animal shelter
Goochland announced it has reached an agreement with Richmond firm Hourigan to complete construction on the new Goochland County Animal Protection and Adoption Center. The county issued a notice to proceed with construction Oct. 21.

Hourigan had been serving as the interim contractor since July 2019, after a delay due to the termination of the project’s original general contractor. Construction is slated to wrap up by spring 2020.

The county worked on the selection process with Selective Insurance Company of America, the previous contractor’s bonding company. Shelter operations will continue at the Central High School complex at 2748 Dogtown Road until the new shelter is completed.

Navy Hill work session schedule revised
The schedule for Richmond City Council’s series of work sessions on the proposed Navy Hill development has been revised. Two previously scheduled meetings on Nov. 12 and Dec. 9 are cancelled. Remaining meetings’ times have been changed to 3-5 p.m. on Oct. 28, Nov. 4 and 25, and Dec. 2. The Monday meetings will be held in council chambers.