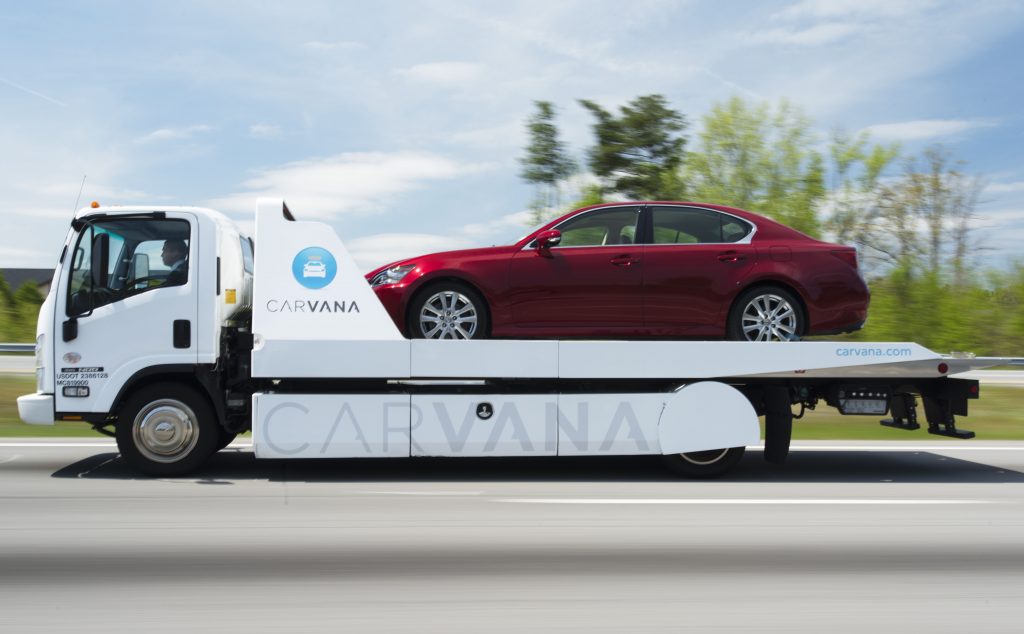 Three years after pulling into the Richmond market, a national used-car retailer is looking to rev up its local presence with a 200,000-square-foot distribution facility near Chester.

Carvana has filed plans with Chesterfield County for a vehicle inspection and processing center on a 183-acre site at 13504-15100 Woods Edge Road, along the east side of Interstate 95 just north of Ruffin Mill Road.

The $40 million project, referred to as Project Utopia by county officials because it involves competitive state incentives, would include multiple surface parking areas – enough to hold 9,000 vehicles – and the two-story, 200,000-square-foot center that representatives described as a vehicle processing facility where inventory is inspected, reconditioned and photographed for online sales, assembly line-style.

An elevation rendering of the two-story building, which would total 200,000 square feet.

The development would not include one of Carvana’s car vending machines, the 6½-story tower structures that the company has become known for and once proposed for a site near Short Pump. It also would not replace or affect the company’s existing distribution space at an undisclosed location in Petersburg, representatives said.

The development is proposed by WavyRE LLC, a Carvana subsidiary that is working locally with Roth Jackson attorney Andrew Condlin. Condlin and project manager Todd Ward held a community meeting last week with area property owners to present the project, which was received with concerns from several attendees about truck traffic and other impacts to area roads and infrastructure.

The LLC is seeking to rezone the 183 acres from two industrial designations to one, I-1 light industrial, with updated proffers through a conditional-use permit. It has the property under contract to be purchased contingent on county approvals. 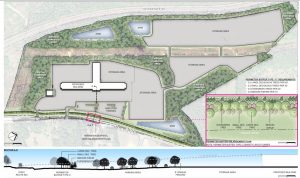 Ward stressed at the meeting that the facility – one of several the company is rolling out across the country – is intended to be discreet and not draw attention. All maintenance work at the facility would be done inside the building, and the site would not involve online sales or signage, Ward said.

“We’re not doing it from a marketing standpoint. We’re doing it purely from a distribution standpoint,” Ward said.

Plans show the site would be largely shielded from view along the interstate by existing woodlands and along Woods Edge Road by a 100-foot vegetative buffer included in the proffers.

“We try to be as discreet as we possibly can,” Ward said. “With that many cars on site, it can be attractive to all kinds of nuisance.”

Vehicles purchased would be delivered to customers’ homes or workplaces via trucks that are projected to make about 45 trips per day. The facility would employ between 400 and 500 workers over two shifts from 6 a.m. to 10:30 p.m. 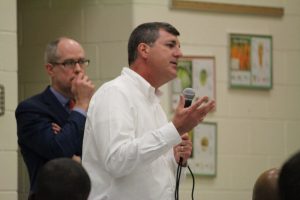 Ward said deliveries and shift changes would be scheduled to avoid peak traffic times. Two entrances off Woods Edge Road toward the southern end of the property would provide separate access for trucks and employees. Turn lanes would be installed on the road, and Ward said trucks would be routed to and from I-95, the site’s proximity to which makes it appealing to the company.

“We have really found this site to be integral to our marketing from D.C. to the coast back through northern North Carolina,” Ward said.

Responding to questions from attendees, who noted the site’s proximity across the Woods Edge Road to residential neighborhoods and Marguerite F. Christian Elementary School, Ward and Condlin noted that the property’s existing zoning was intended for an industrial park and allows for denser development that could generate greater truck traffic.

Asked about impacts to neighboring property values, Condlin said other centers the company has developed have not had a great effect, reiterating that the project would downgrade the property’s current zoning. 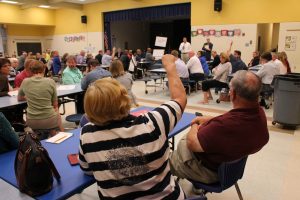 Ward said the center is one of three that Carvana is aiming to open next year. The company is working on the local project with Chesterfield-based engineering firm Timmons Group. Charlotte-based WHN Architects designed the structure.

Doing business in Richmond since 2016, the 6-year-old company is now publicly traded and has doubled its sales volume year after year. Ward said Carvana brought in $400 million sales in 2016, $850 million the following year, $1.9 billion in 2018 and is on track to nearly double that number this year.

Soon after starting deliveries in Richmond, Carvana proposed one of its car vending machines for a site along Interstate 64 near Short Pump, less than a mile from the original location of locally based competitor CarMax. The project was withdrawn months later, with the company citing an inability to make a real estate deal work for the site.

Asked after the meeting if Carvana is pursuing other sites in the area for a car vending machine, Condlin said, “No comment.”

The project adds to other investment in and around Chester that has come to light in recent days. This week, Shamin Hotels announced it will invest $125 million over three to five years in new hotels and development at two locations in Chesterfield, including property off Route 10 about a mile or so north of the Carvana site.

It would have been helpful to note the facility’s projected property tax figure.