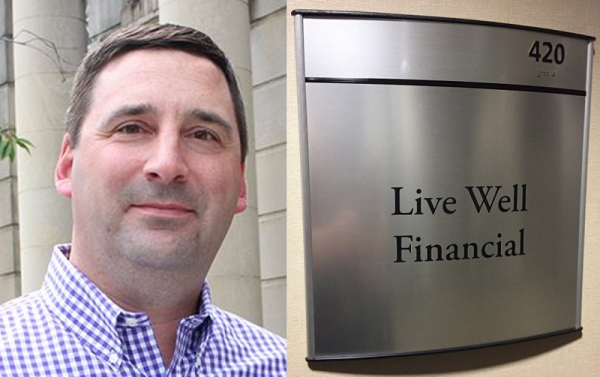 Michael Hild has until Nov. 29 to respond to the existing civil claims. (BizSense file photos)

Hild, the founder and CEO of now-defunct and bankrupt Live Well Financial, a Chesterfield-based mortgage company, had been due to respond by Oct. 29 to a lawsuit brought by the Securities and Exchange Commission alleging fraud and violations of federal securities laws.

But a last-minute request for an extension and subsequent judge’s approval pushed the date back to Nov. 29.

Hild is represented in the case by attorney Michael Rella of Murphy & McGonigle in New York, who did not respond to a request for comment.

The SEC’s civil charges, announced in early September in conjunction with related federal criminal charges, claim that Hild orchestrated a multimillion-dollar scheme that fraudulently inflated the value of Live Well’s reverse mortgage bond portfolio in order to borrow against it.

“During the 18 months following the implementation of the scheme, Live Well’s bond portfolio shot up in value from $71 million to $570 million,” the SEC claims.

The alleged scheme led to Hild borrowing tens of millions of dollars more than lenders would have otherwise allowed. The SEC claims he pocketed at least $24 million as a result, with his annual compensation increasing from $850,000 in 2014 to $10.96 million in 2018. It also allegedly left lenders in the hole by more than $80 million

The SEC complaint asks for a jury trial to force Hild to repay the allegedly ill-gotten funds, plus interest and penalties, and to bar him from being employed as an officer or director of a company that sells securities.

Rohr and Stumberger are cooperating with authorities and have pleaded guilty in the criminal case, and consented to partial judgements on the civil matter.

Hild, 44, has pleaded not guilty in the criminal case, which charges him with securities fraud, mail fraud and bank fraud.

Hild was arrested on the charges in Richmond on Aug. 29, but will remain free on a $500,000 bond ahead of a scheduled jury trial in Manhattan in October 2020. The bond required he surrender his passport and not leave the state other than for legal matters in New York.

Following his arrest in September, Hild’s attorneys said, “While Live Well unfortunately failed, every business failure is not a corporate crime.”

The businesses, the buildings in which they reside and dozens of other nearby properties on the city’s Southside are among Hild’s assets that the government has said it may look to seize if he is found guilty on the criminal charges.

When i\I saw “Hild gets more time” I didn’t the the rest of the headline would be “to respond to SEC charges”.