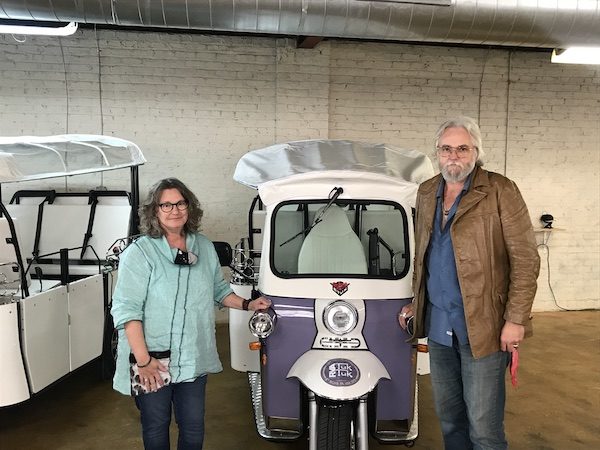 Lyndsi and David Austin with one of their tuk tuks. (Photos by Mike Platania)

“Everyone turns around and looks at ’em,” David said.

Most tuk-tuks are gas-powered; their name comes from the sound they make.

But Lyndsi, a sociologist at the Virginia Department of Housing and Community Development, and David, a local ad vet who previously owned his own agency, saw electric tuk-tuks on the streets of Lisbon, Portugal, while traveling in May and got the idea to bring the concept to Richmond.

After securing four tuk-tuks from a Holland-based manufacturer and getting DMV’s clearance (the vehicles are considered tricycles under DMV purview), the Austins leased about 3,000 square feet at 1113 W. Clay St. in the Carver neighborhood for RVATukTuk’s headquarters. 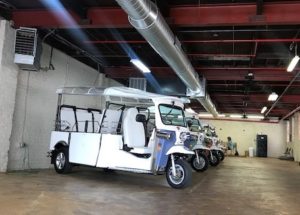 “The concept is simple: We want to use them for tours, special events and weddings,” Lyndsi said. “Now we’re working on establishing some hop-on, hop-off circuits.”

She said they’re still experimenting with the circuits, but previous weekend routes have run from Hardywood Park Craft Brewery on Ownby Lane, through Scott’s Addition, to the Devil’s Triangle in the Museum District and along Robinson Street in the Fan.

The Austins said the circuits are free to ride.

“Our ideal is that they’re free to the riders, but to do that we need to sell advertising on the side of the vehicles,” Lyndsi said. “It’s attractive for people since they don’t have to pay, but for businesses, we’re bringing customers to the door and we’re helping them circulate without bringing additional cars to an area.”

Sheppard Street Tavern is the first local business to put its logo on the side of a RVATukTuk. 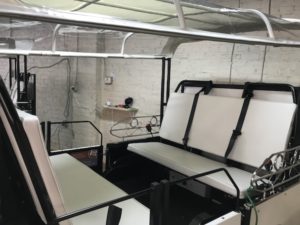 The vehicles are free to ride and seat up to six passengers.

The vehicles can seat six passengers and a driver, and have a hand throttle and pedal brake. Other amenities include heated seats, speakers and a battery life of up to six hours. They have a top speed of 25 miles per hour.

“We have had a couple of dogs go along for a ride, which we’re fine with,” Lyndsi said.

The Austins are self-funding the business with the help of a loan from Virginia Community Capital.

Typically used in developing countries with warm weather, tuk-tuks are gradually making their way to the states and have landed in cities such as Asheville, Buffalo, Chicago and Denver, the Austins said.

“We’re pretty early. There might be 200 total out there,” David said.

Hey;
do these things have some kind of flaps that come down on the side? Seems pretty chilly even with the heated seats, or is this not supposed to be a year round thing?

They do have weather guards that can quickly be put on and taken off. We’ll be. Out year round unless it’s snowing, or there is snow/ice on the streets.