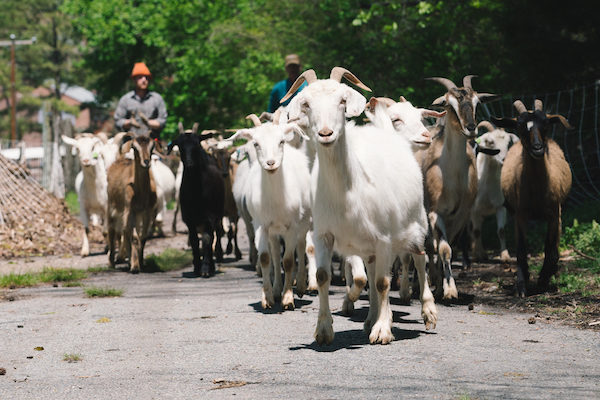 About 100 goats were brought in to UR’s campus to help eat and clear out invasive plant species. (University of Richmond)

The University of Richmond is wrapping up restoration work on the Gambles Mill Eco-Corridor, a roughly half-mile trail and creek that runs between its campus and Country Club of Virginia, and down to the intersection of River and Huguenot roads.

The Eco-Corridor is a project with four parts: stream restoration of Little Westham Creek, invasive species removal and native plant restoration, stormwater management and the creation of a multi-use trail. 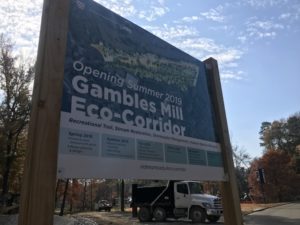 Design work began on the project in 2016. (Mike Platania)

“The Eco-corridor is a stewardship initiative,” said Rob Andrejewski, UR’s director of sustainability. “Thirteen acres of land at the university that’s part of a floodplain are being restored so there’s healthier water and less sediment going into the James River, and it’ll allow people to connect to campus from River Road and the Huguenot Bridge.”

In 2011, UR laid out a master plan that included restoring the old Gambles Mill Trail, a pedestrian trail built over an old rail line that used to cut through campus.

“It was closed off to cars about 30 years ago, and it was a well-used path but it was in disrepair. We wanted to make a corridor that was a way to access River Road and the river more easily but also provide some time in the outdoors,” Andrejewski said.

During that process it was suggested that the university restore Little Westham Creek, a creek that runs from Westhampton Lake on UR’s campus down to the James River.

“The trail-restoration project turned into a stream-restoration project, which will ultimately result in the planting of 9,000 new trees in an area that’s going to be more biodiverse, do a better job of supplying the James River and provide space for teaching,” Andrejewski said.

Restoring Little Westham Creek also included changing the flow to take a number of S-turns instead of running straight, building up the creek’s banks to be steeper and deeper. 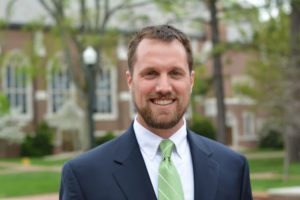 “When we’d get a big storm, instead of overflowing the banks and percolating into the land … the creek would take those things further down to the James (River),” Andrejewski said of the creek’s former state.

“(Scott’s Addition-based engineering firm) RES came in with some serious machinery and changed the entire flow of the stream and geography of the stream.”

The stream restoration began in March and was completed mid-October, Andrejewski said.

With the steam restored, UR then had to both remove invasive plant species and reintroduce native plants.

UR and RES enlisted Afton-based firm Goat Busters, which brought a herd of goats to campus to eat and clear out the invasive species.

“That got a response I never could have imagined. It became a tourist-type situation,” Andrejewski said, laughing. “There were about 100 goats here over the period of a few weeks. They ate everything. They were absolutely phenomenal.”

Grass and trees have been planted in place of the invasive species and will continue to be planted into spring 2020. 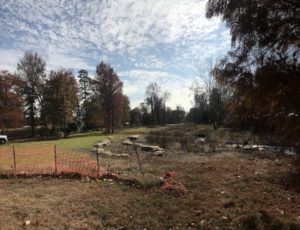 Rain gardens and other stormwater management features were added to UR’s campus as part of the project. (Mike Platania)

The storm water management aspect was achieved mostly through the stream restoration, and Andrejewski said they’ve also added things such as rain gardens around campus to help with storm water runoff.

“Part of what occurred in that is we had an old building project on campus and when we dug out the foundation, we removed a bunch of large boulders,” he said. “Those have been incorporated into the stream. To call it our own Texas Beach would be going a bit too far, but we now have a James River rock hangout area. I’m calling it Little Westham Creek Beach.”

Andrejewski said RES fronted the cost of the project, which created an environmental mitigation credit. The City of Richmond then purchased the credit from RES. Andrejewski said he wasn’t certain of the final cost.

The restoration of the 0.4-mile multi-use trail is the only aspect of the Eco-Corridor that’s not yet completed.

UR is creating a larger entryway to the Gambles Mill Trail on campus, which will be flanked by two large native trees, and an ADA-accessible crosswalk at the trail’s other end at River Road.

Andrejewski said they hope to have it completed by year-end. 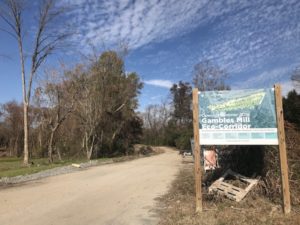 UR’s Gambles Mill Eco-Corridor will include a multi-use asphalt trail that will run from River Road into campus. (Mike Platania)

“They’re putting in hardpack (gravel) that the asphalt will go over top of. It might be open to pedestrians even before asphalt goes on,” he said.

Andrejewski said in addition to helping connect the campus to River Road, reduce sediment runoff and provide outdoor classroom space, the Eco-Corridor will be a fine addition to UR’s campus.

“I believe this project is ultimately going to be something that folks who didn’t have it come back for reunions or to visit will look at and wonder why it wasn’t here when they were,” he said.

Great addition to the West End.

Great addition to the world! So proud to be an alum.

This is great! I’d love to see more projects like this, because eventually they start connecting with other trails and they provide for a better quality of life.