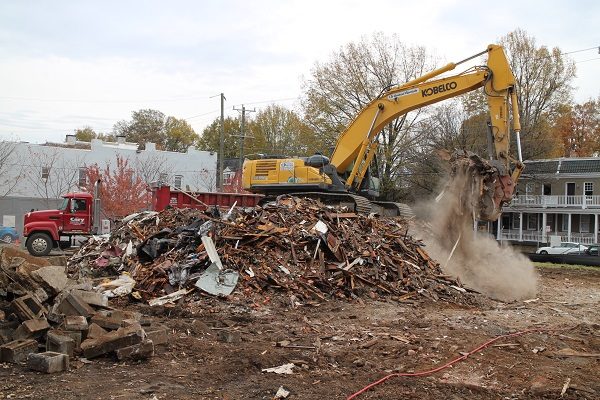 Site work started last week with the demolition of two homes that were in poor condition. (Jonathan Spiers)

An infill development underway in the Fan is set to add some modern to the 19th-century neighborhood’s housing stock.

Site work started last week on The 2200 at Cary, a cluster of 19 modern-design townhomes that will rise on a half-acre corner lot at Cary Street and Shields Avenue. 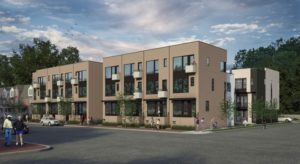 Two homes along Cary that were in poor condition were demolished to make way for the $5 million development, which will consist of two rows of three-story townhomes ranging from 1,700 to 2,200 square feet each. The three-bedroom, 2½-bathroom units will be priced in the high $400,000s to the mid-$500,000s.

All units will have balconies, and the units lining Cary will have third-level rooftop decks overlooking an interior courtyard. The units behind those will have garages accessible by an alley, and those units also will have options for elevators. Units without garages will have off-street parking spaces. Eleven additional spaces will fill a rear parking lot. 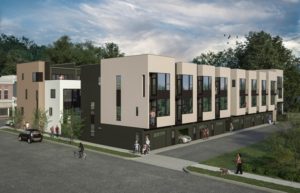 Units lining the alley will include garages. (Johannas Design Group)

Construction is scheduled for completion next summer.

The project required a special-use permit from the city to waive the lot size and public street frontage required for single-family homes in the existing zoning, R-63 Multifamily Urban Residential District. Daniel & Co. filed plans for the project in the spring, having amassed the properties involved over a span of seven years.

The townhomes will add to other new construction that has popped up along that stretch of Cary in recent years. A block east at Cary and Rowland streets, Cory Weiner’s CW Performance Group is putting the finishing touches on a new two- and three-story mixed-use building. Across Rowland from that building, another newer development houses sandwich shop Olio. 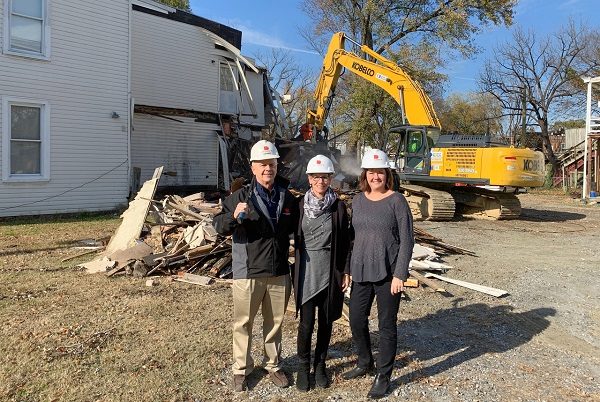 While destroying all the large trees on the property, the company’s contractors dropped a tree on my garage, ruining a gutter and creasing the roofline. I had to get the City Councilpersons office to intervene when Mr Daniel refused to answer my text messages. They’ve ripped into the neighborhood without any courtesy or respect for the neighbors or existing community. Finally fixed the gutter. Worst of the worst…

While I think there are openings for a variety of styles of architecture in a neighborhood, I still think new structures should generally follow the “form” of existing development. Going up a story is not that bad and there are many ways to handle that like setting the top story back some, but when you combine that with moving the buildings much closer to the sidewalk/street than any other structure in the area it seriously starts to erode the character of a neighborhood.

It’s a shame that the “historic” nature of the Fan will be invaded by the “modern” design of the replacement housing. The rendering s look like ugly boxes.

I don’t love the look, but I think the Fan can handle it, and it’s much better than what was there. I’m a fan of density in the city, but I confess it’s going to be interesting how they make those work.

The project is fundamentally good for the city though

While I appreciate them developing the area and bringing folks to the area. I wish the “modern” design was more indicative of the FAN and would uphold the architecture and feel of the Fan itself. Make them modern with building materials and insider with open spaces but keep the “FEEL” of the fan folks. It is important to Richmond.

I’ll be interested to see how liveable this development is. Those renderings seem to show an awful lot of unshaded glass that will have a mostly Southerly aspect. I can’t imagine life without drawn blinds will be comfortable between May and September.

Cary St frontage has been a hard sell for residential for a long time, so best of luck to these modern units. They don’t look half-bad – hopefully, they don’t pinch-pennies on the interiors.

If these fronting Cary list in the high $400’s, they will sell instantly.