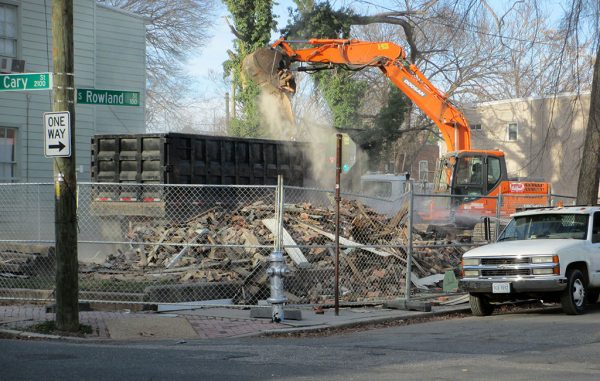 A 2,200-square-foot duplex built in 1908 was recently demolished. (Jonathan Spiers)

After buying up properties in Brookland Park and the Museum District, a local developer has turned his focus toward the Fan for his next project.

A 2,200-square-foot duplex built in 1908 was recently demolished from the double-parcel site to make way for Weiner’s project, which he likens to the neighboring building developed by David Levine of Plus Properties, A.J. Shriar and Ronnie Shriner.

Weiner said he purchased the two parcels, which have been combined to create 2100 W. Cary, with the intention of doing a similar project that renovated the existing building with a new-construction addition. He purchased the property in January 2016 for $197,000, city property records show.

“We were going to build an additional three stories to the left of it, kind of what they did next door,” Weiner said. “When we got into it, the building, it just made sense to tear it down and build new.”

Planned in its place is a two-story corner building and three-story adjoining structure that will consist of four apartments above and beside a 1,500-square-foot commercial space. The apartments will include three bedrooms and two bathrooms and range from 1,350 to 1,500 square feet. Rents have not been set. 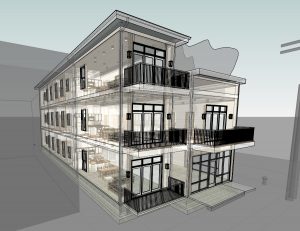 A rendering of the new construction planned.

Weiner said the corner commercial space would be ideal for retail or a small restaurant or market. He said he doesn’t have a tenant lined up for the space.

Weiner is working with Ashland-based Perretz & Young Architects on the buildings’ design. He will serve as general contractor. Richmond-based Pryor Hauling performed the demolition.

He declined to disclose a cost estimate for the project, which is being financed through Village Bank. Weiner worked with commercial loan officer Kim Wills on financing.

Once permits are secured, Weiner expects construction to last between eight and 10 months. He said he’s close to receiving a building permit for the project.

Active this year in the Brookland Park area, where he has purchased nine storefronts along Brookland Park Boulevard since April, Weiner said he wasn’t looking to purchase property in the Fan area but was alerted to the site by Jay Ashcraft with Joyner Commercial, who told him the owner was looking to unload it.

“It was a great deal,” he said. “Originally the duplex was a fixer-upper and would create some equity if I did it that way. I also saw what was going on with the bus depot with Monument (Cos.), so that was a big deciding factor, and Plus Properties was doing their stuff (next door).

“Overall, the Fan market is doing very well right now, so it made sense.”

Weiner joins others investing along West Cary Street between Boulevard and Belvidere. Cary Street Station, Monument Cos.’ $45 million redevelopment of the old GRTC bus depot, has attracted tenants including a pizza restaurant, a realty firm and a boxing chain. Other developers are fitting new homes in area alleyways.

Cary Street Station has been the game changer for every valuation between The Boulevard and VCU. Risks are being taken now along that strip that would have been unthinkable several years ago. I’m glad to see a new name has joined the parade.

Why is tearing down a 110-year old building – one capable of being restored or renovated – not prohibited? This is the way cities lose what makes them special.

Isn’t it funny how often we hear developers say they purchased property with the intention of renovating it only to demolish it at the last second? For instance, area residents were assured The Westhampton Theater was going to be renovated and then, wham bam thank you ma’am.

I’m sure one of their sycophants will be here to defend these developers.