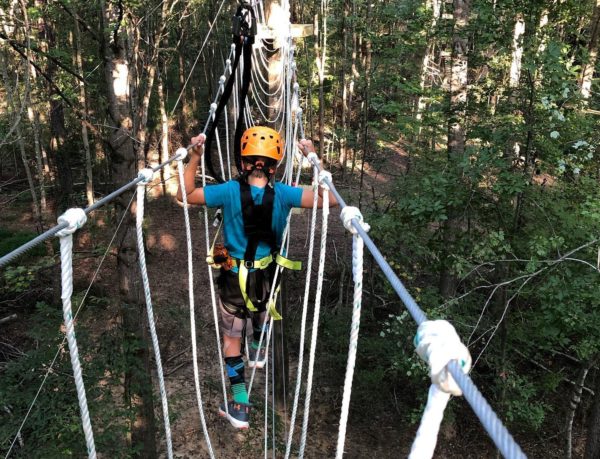 Bringing to life an idea they had on a road trip last year, Alex Van Ness and Matt Klaman have opened Canopy Adventure Park, a ropes course tucked away in the woods of Powhatan just beyond the boundaries of a local golf club.

The course, which opened in late October, covers a 300-by-200-foot area on the outskirts of Independence Golf Club.

Strung upon existing trees and newly installed poles, the park offers four courses – two sets stacked atop one another –varying in difficulty and some climbing as high as 45 feet. The park spreads out across the woods, featuring 38 elements such as bridges, ladders, floating platforms and tightropes. It eventually crosses over and above a quiet creek. Once climbers reach the end, they fly back to the start on a 250-foot zip line. 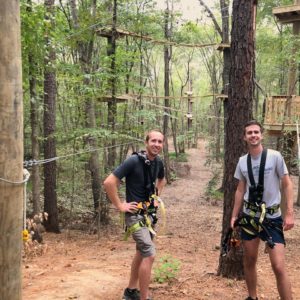 Alex Van Ness (left) and a friend at the course.

The park is currently open only on weekends and by reservation only, allowing Klaman and Van Ness to keep staffing costs down during the colder months.

“Then next summer we’ll do our grand opening, where we’re open full time,” Van Ness said.

Users get 2.5-hour time slots for $45 per adult and $35 for those age 14 and under. Discounts are available for larger groups.

The minimum age is 10 and the minimum height is 4-foot-9.

Van Ness and Klaman had the idea for the business last fall, when their wives took them to a ropes course in Rice, Virginia, near Farmville.

They scouted sites and eventually met with Independence owner Giff Breed, who’s always game for experimenting with new non-golf ways to attract folks to his club. And the club had heavily wooded excess land that was unusable for golf.

The two sides cut a deal, with Breed forgoing a traditional lease and instead setting up a revenue-sharing agreement with the park.

Construction began this summer, led by Vestals Gap Ventures, a contractor from Purcellville that specializes in building ropes courses. 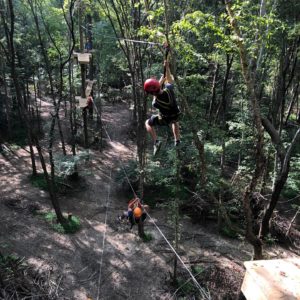 The park features elements such as bridges, ladders, floating platforms and tightropes.

Klaman and Van Ness each have an adventurous side and they sought to build a ropes course that would challenge them, while also offering something for those of all skill and strength levels.

“It’s all that we wanted,” Van Ness said. “We love doing the course ourselves and that’s basically what we wanted. The harder courses are some of the hardest you would find anywhere around. They are meant to challenge.”

The course is so tucked away, Canopy customers must drive their cars on part of the Independence cart path. The deal with Independence includes use of a nearby office for registration and staging.

They also have excess land to work with, as their deal with Independence gives them access to an 800-by-1,000-foot area.

The first likely expansion would be the construction of a lower-level ropes course somewhere in the middle of the current course to allow younger age groups to come out, likely for those age 5 and up.