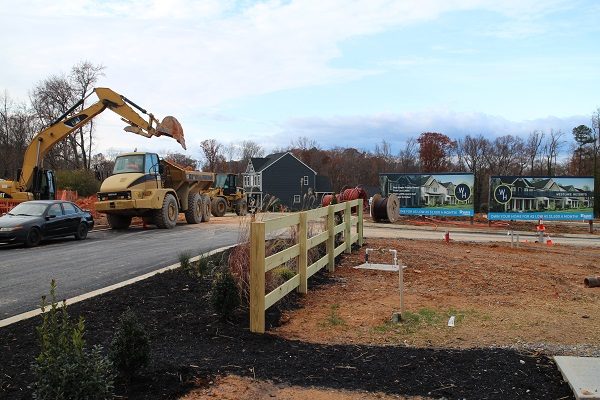 Lots are being established at Westlake Heights, a 120-home subdivision off Jahnke Road. (Photos by Jonathan Spiers)

Clarification: Westlake Heights is planned for single-family detached houses. The original headline to this story referred to a different housing type and has been changed.

Already busy on other projects throughout the region, a newer name in the Richmond area’s residential development scene is getting going on its next subdivision, on the first tract of land it purchased as a company.

Ryan has built a model home on the site, which spans 32 acres behind the recently constructed Village at Westlake apartments off Jahnke Road across from German School Road. The apartments, built in recent years by The Breeden Co. from Virginia Beach, are situated behind The Crossings at Bramblewood apartments, just west of Lucille M. Brown Middle School. 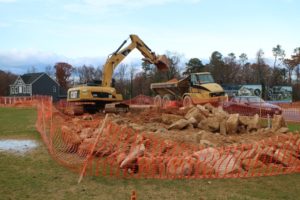 Sales started last month with the opening of the community’s model home, visible at left.

Site work on Westlake Heights started last summer and is picking up with the completion of the model home, which opened in recent weeks. Sales kicked off in mid-November, with five homes sold in five days, according to Ryan.

Legacy Land President Cindy Weinstock said Westlake Heights is the first property the company purchased since she formed it with father and daughter Bill and Tracey Johnson, who previously worked with Weinstock when she was with Atack Properties.

That development company, for decades one of the more prolific in the Richmond area, is winding down and set to close at year’s end, with its employees transitioning to Legacy Land.

Weinstock, who has served as Atack’s president since the death of founder Bob Atack five years ago, formed the new company while seeing through a five-year plan that Atack had put in place prior to his death.

Legacy Land purchased the Westlake Heights property in 2017 for $1.4 million, through an entity called Westlake LLC, property records show. The land was previously owned by Breeden, which had purchased it along with the parcels that now house the Village at Westlake apartments.

“It was zoned by a different developer (than Breeden), so it’s been in the works for a long time,” Weinstock said. “Breeden doesn’t really do single-family; they do multifamily. They went ahead and bought the whole thing and were looking for a single-family developer, and that’s how we got involved.” 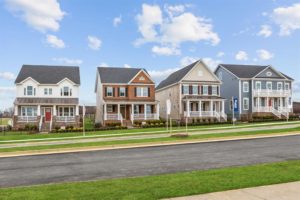 A rendering of sample homes to be built at Westlake Heights. (Ryan Homes)

Weinstock projects buildout in two or three years, keeping pace with Ryan’s target of 40 or so homes that she said the builder aims to sell there each year.

In addition to the homes, the subdivision will include a bike path connecting to the nearby Powhite Park trails.

Legacy Land has tapped Ryan as its preferred builder for all of its projects thus far, including the 24-home Pemberton Ridge subdivision off Pemberton Road in Henrico. Other projects underway include Britlyn North, consisting of 46 homes in two sections along Staples Mill Road across from Glen Allen High School. Ryan also is lined up for Legacy Land’s Middleton Place, a 23-lot subdivision at 9460 Hungary Road.

“They’re kind of our go-to builder,” Weinstock said of Ryan. “We’ve worked a lot with them in the past through Atack, although we’ve worked with a lot of different builders. They sell double the number of homes of any other builder in town, so we enjoy our relationship with them.”

Weinstock said Legacy Land continues to hunt for new sites for its next projects. She said the company is under contract on a property in Short Pump and looking for others.

Meanwhile, Ryan is keeping up its local output with other projects around Richmond. In Hanover, the company recently hit 100 homes sold since April at Giles, a 400-home development by East West Communities and local developer Willie Goode at the former Giles Farm across Atlee Station Road from Atlee High School.

that’s an aggressive price point for that location, going to be fascinating to see how the market reacts

Yeah, agreed. At that price point, it would make more sense for a family to buy in Chesterfield and get access to better schools.

Who says they are all going to be families with kids?

I thought the same thing at first, but I’m not sure the pricing is as aggressive as it first appears. Based on the numbers in the article, they’ll be selling these for somewhere around $150/sf. Homes along Hagueman and Glenvale which will share a property line with this development have been selling this year for that price/sf, if not more. One along Glenvale sold for $300k in August. If you want to be in that area, new construction at the same price point as a 50+ year old house is probably going to appeal to some people.

area wise, that’s a key if. It’s been trading as a value neighborhood.