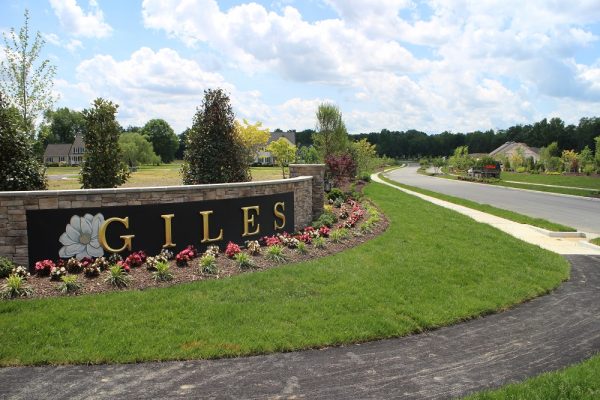 The entrance to the neighborhood off Atlee Station Road. (Photos by Jonathan Spiers)

A 400-home development more than a decade in the making is beginning to take shape in Hanover County’s Atlee area.

Roads have been paved and construction is starting at the former Giles Farm across Atlee Station Road from Atlee High School, where East West Communities and local developer Willie Goode are collaborating on a community called Giles, planned for 320 houses and 122 townhomes to be built by Ryan Homes.

The project is the first in Hanover for East West, whose Richmond-area communities include Hallsley in Midlothian and Patriots Landing in New Kent County. Daniel Jones, senior vice president, said East West had been eyeing the county for some time when the opportunity arose to collaborate with Goode, who guided the project through the rezoning process in 2011. 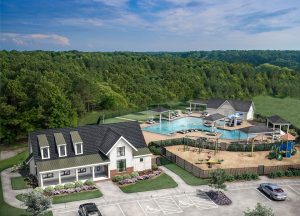 Planned amenities include a clubhouse and pool with water slide. (East West Communities)

“Hanover has been on our radar for a while and has continued to see growth both in the population and in employment base. It just seemed like a good time to try our first project there,” Jones said.

“We liked the proximity to the schools – all three are literally across the street. You also have immediate access to (interstates) 295 and 95, so you can get to Innsbrook and downtown within 15 minutes.”

Goode is developing about 42 acres along the entrance to the community off Atlee Station Road, while East West is responsible for the rest of the site, which totals 268 acres stretching to Interstate 295. Jones said both sections are part of Giles and will have equal access to community amenities.

“It just happens to be two developers for the same community,” Jones said.

Goode’s section is owned by an entity that includes his son and daughter, Eddie Goode and Sarah Kellam, who run local building firms Colonial Homecrafters Ltd. and Homeplaces Ltd., respectively. Those firms are not involved as builders at Giles, which Jones said will be built entirely by Ryan Homes.

East West purchased its portion of land from Giles Farm’s Robert Giles two years ago. County property records show the bulk of that land, a 190-acre tract, was purchased in November 2017 for $5.25 million. The Giles family plans to maintain its residence on an adjacent 7-acre tract, Jones said. 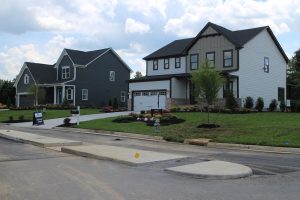 Jones said site work on Giles has been underway for about 1 ½ years. Model homes opened in late April, kicking off sales that Jones said totaled 16 homes in the first two weeks.

All homes will be constructed with HardiePlank siding, and the townhomes will include two-car garages. Community amenities include a clubhouse, pool with waterslide, playground, zipline, pocket parks, fishing ponds and walking trails.

Giles adds to Ryan Homes’ local workload, which includes 120 condos at HHHunt’s Wescott development near Brandermill and dozens of homes in Realty Ventures Group’s Tarrington on the James in Midlothian. The Reston-based builder also has been in talks to build 106 townhomes at the site of the former Manchester Town Center.

Meanwhile, another Hanover farm is being pitched for development. Earlier this year, Gustavus McCracken listed his family’s 117-acre Glen Allen-area farm with an asking price of $2.75 million.

Giles has been a long time coming. Willie has been working that area of the County since the early 2000’s. Hanover is in need of affordable housing to provide opportunities for their young when they return from college. Giles will open a few doors for them but 400 homes will be scooped up quickly.

The median house price in Hanover county is $276,000. Graduate starting salary somewhere around $50k. Add in student loan repayment etc and Hanover is not providing affordable housing anywhere, not new build nor existing stock. Even Henrico’s median price is 25k less.
This development will sell because of the proximity to the schools. Nothing else is needed.