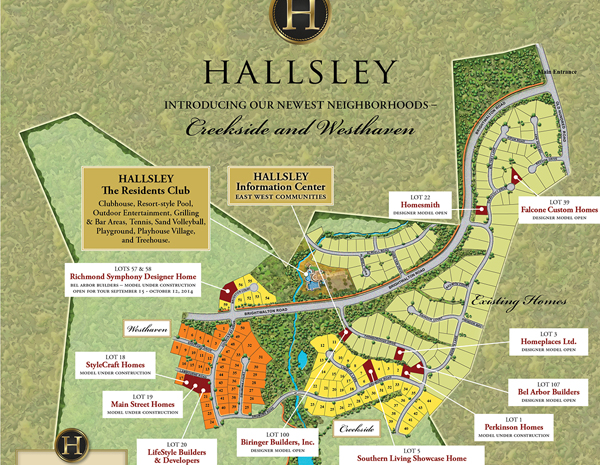 Wasting little time in building momentum, the new developer of a massive Chesterfield subdivision has an expansion in the works.

East West Communities, which bought the Hallsley development off Old Hundred Road in 2013, said it plans to add several new sections in the upscale Midlothian community this year for a total of at least 88 new home sites.

Among the additions will be new sections for Hallsley’s Westhaven and Creekside neighborhoods. It will also add Saville Park, a maintenance-provided section, and Enclave, a manicured cul-de-sac section.

Headquartered in Midlothian, East West Communities bought Hallsley’s remaining 570 acres – about 600 lots – in January 2013 for $9.5 million, said Daniel Jones, the company’s project manager. It is financing the project through Carter Bank and Trust of Martinsville.

“We were able to step in and bring some added financing and equity and some creative ideas and move forward,” Jones said.

The previous developers of the subdivision, Land First LLC and Hallsboro Development Corp., had prepared 140 home sites, and 70 houses were built there before last year’s sale, Jones said.

Hallsley was started by Chesterfield developer Mark Sowers and his brother, Buddy Sowers, who died in February. Its first section began in 2007.

Mark Sowers said many were banks involved in his development of Hallsley and the sale to East West came about after some of the lenders struggled with difficulties related to bad loans and federal regulations.

“Due to the housing collapse, federal regulations required the banks involved to call the loans at maturity, even though the loans were all current,” Sowers said in an email. “As you can imagine, trying to make a deal with one bank was near impossible. Getting seven to agree on anything was a miracle.”

Sowers said the loan balance was extremely high and, after trying to obtain other financing, he made a deal with the main lender, Franklin Federal Savings Bank, for the main part of Hallsey to be taken on by East West. 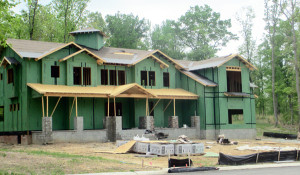 A home under construction at Hallsley. (Photo by Brandy Brubaker.)

“East West has pretty much followed the original plan and vision for Hallsley and is obviously doing a great job moving forward,” Sowers said. “It was an unfortunate set of circumstances, but you do what you have to do when times get tough.”

Sowers said he is grateful to the banks for their help “through these difficult times.”

After the sale last year, East West prepared more than 100 lots in Westhaven and Creekside for building, Jones said. The company sold 80 lots over the course a couple months during the year and, in turn, builders sold 30 houses.

Another 30 houses were sold in the first quarter of 2014, and Jones anticipates builders will pick up another 80-or-so lots this year.

“We’re trying to stay ahead of the builders,” he said. “The worst thing we can do is run out of lots.”

Four of the 50 lots in Westhaven’s first section are still available. Eight of Creekside’s 44 first-section lots are open.

The second sections will bring 24 new home sites to Creekside and 32 to Westhaven, Jones said.

Lot preparation will also begin this year in new sections called Saville Park and The Enclave.

Homes in Saville Park, which will cater to older residents, will range in size from 2,100 to 3,600 square feet, Pollard said. Prices start in the mid-$400,000s. All of the houses will have a first-floor master bedroom, while maintenance is provided for a fee through a sub-association of the main homeowners association. Twenty-three lots will be available. The property has no age restrictions.

Homes at The Enclave will be at least 4,000 square feet and will include at least $10,000 in landscaping per house. Lots in the section will be a little bigger and more private than those in some other sections. Nine lots will be available, but a few are already spoken for, Jones said.

“The Enclave is sort of upping the ante, so to speak,” he said.

East West is also working on the Residents Club at Hallsley, a $3.2-million recreational complex.

Pollard said the club includes a junior Olympic-sized pool with a water slide, tennis courts, a cabana bar, a playground, sand volleyball and miles of trails. It’s scheduled to open in the fall.

Builders working in Hallsley include Biringer, Falcone Custom Homes, Lifestyle Builders & Developers and Ray Williams Custom Homes, companies that are currently showcasing their work at Homearama in another Chesterfield development.

East West began developing in Brandermill in Chesterfield County 40 years ago, according to its website. Since then, it has developed 25 communities in Richmond, Hampton Roads and Florida.

Mark Sowers said he is currently developing other projects, including Harper’s Mill, a subdivision in Chesterfield County.