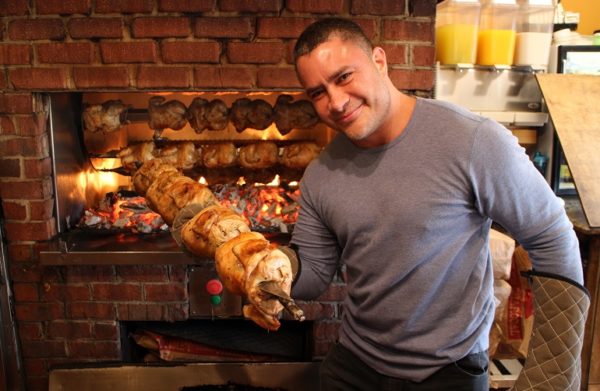 Imagine trying to lose weight while working every day at Chicken Fiesta.

That’s what owner Harold Vega puts himself through, on purpose, one or two times a year to make weight and tone up for his pursuit outside of his rotisserie-chicken-centric, Tex-Mex restaurant chain: a subset of bodybuilding known as competitive men’s physique.

The 46-year-old Colombia native got into competing several years ago, after a health scare led to doctor-ordered diet and exercise. His trainer and nephew, Sebastian Alvarez, suggested men’s physique, and ever since, Vega has taken on the occasional challenge of slimming down and bulking up to get in competition shape. It’s a feat all the more impressive given the temptations of his workplace.

“Coming here to the restaurant, you see the food and you’re starving yourself – it’s horrible!” Vega said, smiling.

“I love my food. I eat in here every single day. And when I come here on a different diet and I can’t eat nothing, just a grilled chicken breast with no side, no condiment, no nothing, it’s very tough,” he said.

That challenge is what Vega said drives him to compete, dropping dozens of pounds one or two times a year to add definition to the muscles – primarily upper-body – that are judged based on poses for such things as symmetry and proportion.

For his efforts, Vega has picked up multiple trophies and medals, placing in competitions he enters both locally and in other cities. His best pose? Vega said he gets the most compliments on one in particular:

“Everyone says I have a huge back,” he said.

While competing requires intensive dieting, Vega said he actually has gained weight since he started five or six years ago, through added muscle mass that’s taken him from 175 pounds before to about 200 pounds today.

“The most impressive thing about competition is you have to lose 30, 40 pounds in like a three-month period. And also, you gain weight so fast after competition, because when I finish is when I eat – and eat, and eat, and eat – to recover yourself,” Vega said.

“I compete one or two times a year. More than that is not healthy, because you bring your body to max to gain weight, and you lose weight,” he said.

When he’s training, Vega said he starts by eating six or seven times a day the first few months to gain weight, lifting heavy in the gym and doing cardio every morning, six days a week. After the first month, he starts cutting down on carbohydrates, gradually decreasing his portion size.

After two months, he’s eating carbs once or twice a day – and only “clean carbs,” such as sweet potatoes and oatmeal. The last 20 days before competition, he eats maybe one carb a day along with proteins such as tilapia, salmon and egg whites. The last couple days, he starts cutting down his water intake to dry out his body.

“This is the most horrible thing,” he said of that stage in the process. “The day before competing, you have like an 8-ounce water, and that’s it. The day when you’ll be on the stage, you don’t have water in your body. Sometimes they have to give me a cup of ice, because you have to be totally dehydrated to look like you’re muscle and showing the veins and everything.”

Vega’s drive to compete has taken him to events in Baltimore, West Virginia and here in Richmond, where he most recently competed in the National Physique Committee’s annual Jay Cutler Classic at the Carpenter Theatre. He’s placed as high as second in his division. But first place has proven elusive.

“I’m going next year for that one,” he said, laughing.

Having learned the restaurant business at his family’s Guapo’s Restaurant chain in Northern Virginia, Vega said he moved to Richmond at the urging of his sister, who used to live here and encouraged him to open a restaurant here. 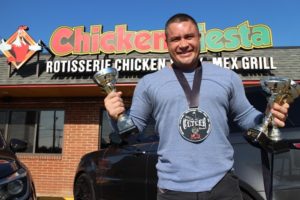 Vega outside his original location, displaying some of the hardware he’s picked up in competition. (Jonathan Spiers)

Armed with his family’s recipes, he said he sold his house in Maryland and used the money to open his first Chicken Fiesta, on Midlothian Turnpike. Fifteen years later, Vega now has four locations – three in metro Richmond and one in Colonial Heights. He is working to open a fifth, and has a property in the Southside lined up for an operations center and corporate offices.

With that growth have come challenges, however, as Vega now oversees about 100 employees across his four restaurants, while also working to further expand the business. Helping him with those efforts are his brother, Jairo, and Karen Ortiz, Chicken Fiesta’s general manager.

A few years ago, Vega said the stress and daily grind of the restaurant business had caught up with him.

“At one point, a couple of times I was in the hospital,” he said. “I had gallstones they had to remove one time, and the doctor said, ‘You have to take care of yourself. You don’t sleep well; you don’t eat well; you need some kind of exercise.’

“My cholesterol was high. The doctor said, ‘You have to do something, because otherwise you will not be here forever.’ My nephew, Sebastian, my personal trainer, he’d already been through that, and he said, ‘Let’s start lifting weights.’

“He told me, ‘Let’s do bodybuilding, let’s do men’s physique.’ I started training with him for about three years, and one day, he told me, ‘It’s time to compete.” 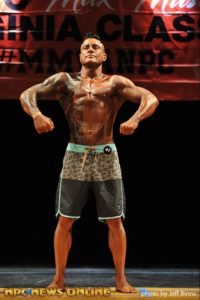 Ever since, Vega said training and competing have become a regular part of his life, helping him stay healthy and eating right throughout the year.

“I didn’t have the time in the beginning. When we’re growing Chicken Fiesta at the same time, it’s almost impossible. But right now, I take my time,” he said. “I wake up early in the morning and do my cardio, I do my meals the way they should be. I have a very good trainer. Sebastian pushes me a lot. He’s the one who wakes me up around 5:10 in the morning and says, ‘Hey, it’s time to wake up.’

Vega resides in Bon Air and is married with two daughters – one a student at VCU who some days works as a cashier at his downtown location, and the other 14 and an avid ice skater. He said his pursuit of his body’s tiptop physique – as well as that elusive first-place trophy – has helped bring balance to his personal life and work life.

Laughing, he said, “I do my advertising in the gym too. I have a sweatshirt with ‘Chicken Fiesta.’ We created a logo with the chicken with big muscles.”

As for that tattoo that covers the right side of his upper body and right arm, Vega said he’s had that since well before his posing days, inspired by his favorite pro wrestler-turned-actor.

He is one fine specimen of a man! Very easy on the eyes…

So awesome! Just makes me love the restaurant even more.