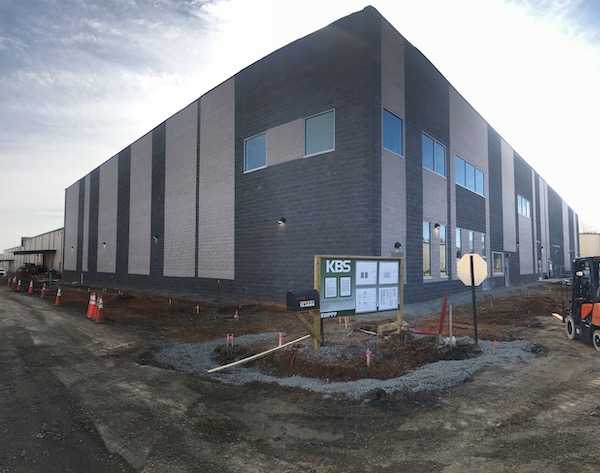 The 82,000-square-foot medical cannabis processing facility was sold for about $12 million as it aims to begin operations this year. (Mike Platania)

IIP is a publicly traded REIT that focuses on buying and leasing back medical cannabis facilities throughout the country.

The state awarded Green Leaf a license to build a medical cannabis facility in fall 2018. The Maryland-based company, which also has operations in Ohio and Pennsylvania, initially leased the property from Modern Warehouses LLC, an entity tied to locally based Fountainhead Properties. Green Leaf then razed two old warehouses on the site to make way for the $20 million, 82,000-square-foot facility.

In its lease with Fountainhead, Green Leaf had an option to purchase the facility. CEO Philip Goldberg said Green Leaf exercised that option, then immediately sold it to IIP the same day.

“In the cannabis industry, it’s hard to get access to traditional sources of financing and capital,” Goldberg said. “So as we build our business and expand throughout the Mid-Atlantic, the new projects require capital, and this is a creative way to get our hands on it.”

Green Leaf’s state license to produce medical cannabis was not sold or transferred in the deal.

The facility is being built in two phases, both of which will include growing, extraction and selling medical cannabis products.

Once operational, Green Leaf will focus on producing capsules, tinctures and vaporization products that will require a prescription in order to purchase.

Goldberg said Green Leaf received a Certificate of Occupancy in time to meet an end-of-2019 deadline with the state and aims to begin facility operations by spring.

“We had an inspection from the (Virginia) Board of Pharmacy. We are working toward getting an approval so we can become operational. That can be anywhere from next week to as many as 90 days,” Goldberg said.

The facility will open with a staff of about 100 and Green Leaf expects to plant seeds the day it gets into the building. The facility eventually will be able to produce about 1,800 pounds of plants per month, from which about 215 pounds of oil can be extracted.

The Richmond facility will be IIP’s first property in Virginia and 32nd nationwide.

In addition to the $11.8 million for the building and land, IIP also has agreed to pay up to $8 million in future expenses on the building.