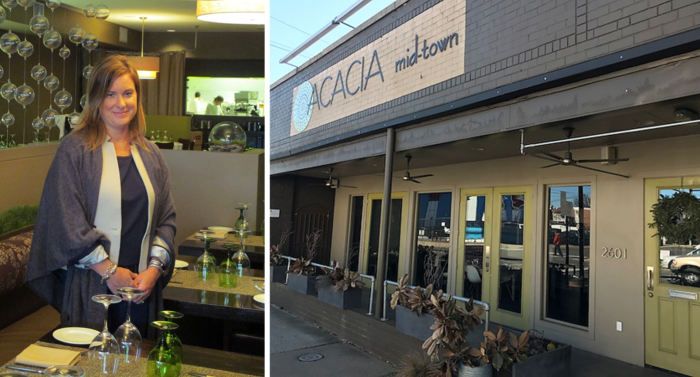 Acacia will close early next month after 11 years at the corner of South Robinson and West Cary streets. Owner Aline Reitzer has run the restaurant since 1998. (Photos by Mike Platania and courtesy BizSense file)

With its longtime tenant on the way out, a restaurant property between the Fan and Carytown is in the hands of a new owner, whose intentions for the building remain a mystery.

Acacia Mid-Town’s building at 2601 W. Cary St. sold last week for $1.18 million, a few weeks before the popular restaurant is set to close after two decades in business.

Calayan LLC, an entity tied to Kristoffer Collo of Ashburn, was the buyer in the deal that closed Jan. 15. Attempts to reach Collo were unsuccessful.

Aline Reitzer, who with husband Dale Reitzer has run Acacia since 1998, said she believes Collo will use the space, but doesn’t know any further details.

“We’re just staying in here for business as usual until (February) 8th, then will vacate shortly after,” Reitzer said.

They listed the building for sale in spring 2019 for an undisclosed amount. Wilson Flohr of Porter Realty Co. represented the Reitzers in the sale. The restaurant was not put up for sale.

Teasing the idea that they may come back for seconds, Aline said last week they’re not stepping away permanently from the restaurant industry.

“We’ve got a couple ideas and thoughts of our next move, but (we’re) not in a place to share anything yet,” Reitzer said. “We will pop up again, though.”