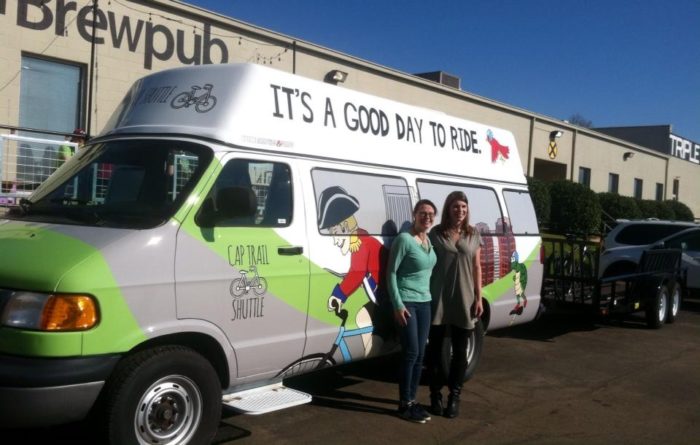 The owners of Cap Trail Bike Shuttle have called it quits, and hope to find someone else to pick up where they’re leaving off.

The shuttle service launched in 2017 to provide pickups and drop-offs for cyclists on the Virginia Capital Trail, the 52-mile bike trail that runs from Richmond to Williamsburg. The idea was that cyclists could enjoy the trail without worrying about turning around and biking home.

Three years later, Cheyenne Burnham, who co-founded the company with fellow local cyclist Alison McGrail, has relocated to Massachusetts. Burnham had acted as the main operator and manager, and without her as the driving force behind the business, it has hit pause on its operations as it seeks a buyer. The shuttle isn’t currently accepting bookings on its website.

“The goal is to get someone to take over it and keep it running,” Burnham said.

She said that as far as she knows, the shuttle is the only service of its kind on the Virginia Capital Trail. The company uses a van and attached trailer to move cyclists and their bikes to and from the trail.

The shuttle ferried about 1,000 people per season. The company charged about $100 for a party of two for a ride from Richmond to Williamsburg or vice versa. Cost would depend on factors such as destination and number of people in a party. Burnham declined to discuss the company’s annual revenue.

She didn’t disclose an asking price for the business. Several buyers have expressed interest in the company. There haven’t yet been serious talks.

Burnham said anyone in proximity to the trail could reasonably get the job done. The company’s website lists five pickup/drop off locations. They’re located at Stone Brewing’s parking lot on Nicholson Street, Four Mile Creek Park in Henrico County, Upper Shirley Vineyard in Charles City County, the Charles City County courthouse and Jamestown Settlement, which is near Williamsburg.

Time is of the essence though, given that the shuttle’s busy season is about to ramp up.

“The season should be starting up next month, so we’re trying to sell as soon as possible,” she said.