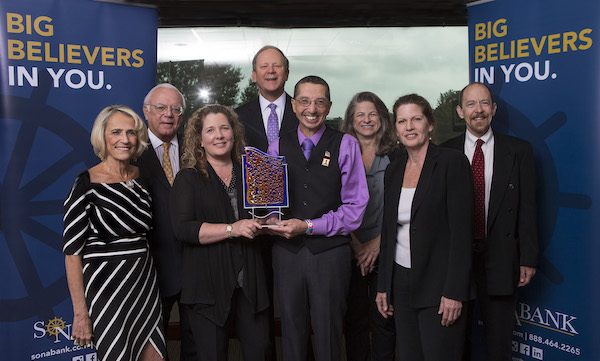 Sonabank was recognized as a top intermediate lender in the Richmond region in October of 2018. Joe Shearin is pictured in the upper middle left of the photo. (Submitted)

There’s been a changing of the guard at the top of a Henrico-based bank.

Joe Shearin stepped down Wednesday as president and CEO of Sonabank, which operates 12 branches in the region.

The move, which the company and Shearin said is a retirement, ends Shearin’s nearly 20-year run as a CEO in the area.

That period began when he took the helm of the former EVB, which combined with Sonabank in 2017. He previously worked for BB&T, the former Bank of Virginia and Signet Bank, among other institutions.

“I just reached a point in my career where it was in the best interest of the company, myself and my family,” said Shearin, 63.

He said his retirement wasn’t part of any formal succession plan related to the EVB/Sonabank deal.

“It wasn’t part of a plan. This kind of came up in the last couple months,” he said. “Running a publicly traded company is a lot of stress.”

Taking over for Shearin is Dennis Zember, who most recently was president and CEO of Ameris Bancorp in Atlanta.

Zember, 50, will be based out of the bank’s Henrico headquarters. Sonabank’s parent company, Southern National Bancorp, technically is based in McLean, Virginia.

Shearin leaves with a hefty parting package, according to SEC filings from Sonabank. A separation agreement will pay him an amount equal to three times his base salary, payable in installments over 36 months. His base salary as of 2018, the most recent figure available, was $520,000.

Other perks include accelerated vesting of at least 26,000 shares of restricted stock, title to his current company-provided vehicle, health insurance for himself and his family for 36 months, outplacement services for up to two years and reimbursement for financial planning services up to $10,000.

Shearin also will stay on as a consultant to the bank through March 31, payable at the same rate as his current base salary.

Shearin said he learned some interesting lessons in the years since the EVB/Sonabank deal.

“The big change has been the different markets we’re in,” he said, referring to the fact that the bank does business in Northern Virginia, Richmond, Hampton Roads and elsewhere in the state.

“We’re in so many varied markets. The trends and customer loyalty and what works in Northern Virginia is totally different than what works in Richmond and the Northern Neck. That was the biggest aha moment for me,” he said.

Shearin’s plans in the interim are to take some time off, travel and spend time with his family. But he didn’t rule out getting back in the game at some point, after his noncompete clause runs out.

“You never know … I might not be through. I might jump back into banking for a bit.”

Congratulations to Joe (and his family!) on his retirement! Baskervill has enjoyed working for Joe and his team back to his EVB days. Often times the tallest person in the room, he is not only the easiest to find but also can be found because he enjoys what he does and others around him are having fun too. Another community banking leader who will be missed!